These early weeks of December are some of my favourite weeks of the year. All of our preparations for Christmas seem to naturally bring the family together, especially on the afternoons when I start baking and the sweet smells draw everyone toward the warm, cozy kitchen. We chat and laugh as we mix and roll and decorate cookies, while Christmas music plays and tree lights twinkle cheerfully in the background. All four of us look forward to the evenings after our baking afternoons; we know we'll gather around our kitchen table for steaming mugs of tea and a few freshly baked treats before we tuck the rest of them away to share with family and friends over the holidays. I'm glad that even though my boys keep growing, they never seem to grow too old to have fun helping with this tradition. 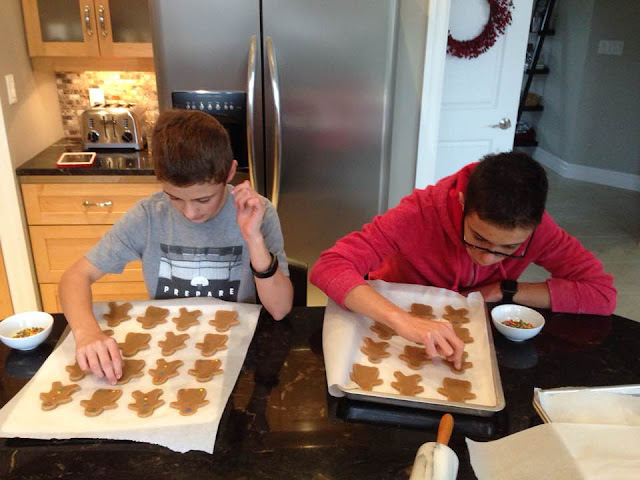 Often during the weeks leading up to the holidays, people ask me about gluten-free or dairy-free baking ideas, because they'd like to be able make something for a family member or friend who has special dietary needs. Today seems like a good time, then, to post an updated collection of our family's favourite gluten, dairy, and egg-free holiday recipes, all made many times in our kitchen and given two thumbs up by expert resident taste testers.  :)  Most of these recipes have already appeared in some form on this blog before, but because I'm always tweaking recipes over the years to make them just a little bit better, these ones are all more current, improved versions. 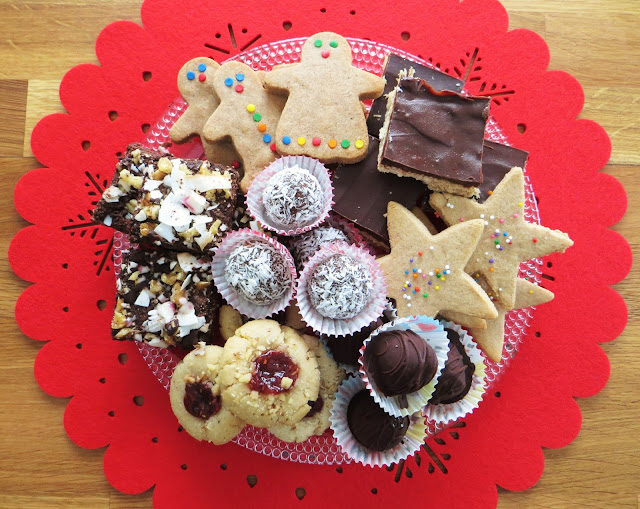 Gingerbread Cookies
(adapted from this recipe from Elana's Pantry)

In a smaller bowl, whisk together the grapeseed oil, maple syrup, water, and  vanilla. Add the wet ingredients into the dry ones, and mix well until a uniform dough forms. Divide the dough into two parts. Form each part into a ball, flatten it slightly, and wrap in plastic wrap. Chill the dough in the freezer for 1 to 2 hours.

Decorate the cut-outs with candy confetti. (We like to add faces and buttons to ours.) Bake in the preheated oven for 10 to 15 minutes, or until the cookies are lightly browned. Cool and serve, or store in tightly sealed containers in the freezer for later.

1 400ml can of coconut milk1/2 cup coconut sugar2 1/4 cups blanched almond flour1/4 tsp sea salt3 tbsp melted coconut oil2 tbsp pure maple syrup1 tsp vanilla2 1/2 cups unsweetened shredded coconut2 85g bars of dark chocolate (at least 70% cocoa), chopped1/2 cup cashew butterTo make your own dairy-free sweetened condensed milk, pour a can of coconut milk into a medium-sized saucepan over medium heat.  Whisk in the coconut sugar, and bring the mixture to a low simmer.  Be sure to keep an eye on the pot, as the mixture could boil over very easily.  Reduce heat to low-medium and simmer the mixture for 15 to 20 minutes, whisking occasionally, until it thickens slightly.  Remove the mixture from the heat and let it cool while you're preparing the crust.Preheat the oven to 350 F.  Line a 9x13 inch baking pan with two pieces of parchment paper, one going over the other in a perpendicular fashion, leaving some overhang all the way around.  In a mixing bowl, combine the almond flour and sea salt.  Whisk together the melted coconut oil, maple syrup, and vanilla in a smaller bowl, and then add the wet ingredients to the dry ingredients.  Stir until well-combined and crumbly.  Press the almond flour mixture into the prepared baking pan, being sure to push down firmly so your crust will hold together well once it's baked.Sprinkle the shredded coconut in an even layer over top of the almond flour crust.  Carefully pour the sweetened condensed milk over top of the whole coconut layer, and use a fork if necessary to help spread it out uniformly, pressing the coconut and milk mixture down onto the crust.  Place in the preheated oven and bake for 25 minutes.  During the last 5 minutes of baking time, melt the chopped dark chocolate and cashew butter together in a small saucepan over low heat, stirring occasionally.  As soon as you remove the baking pan from the oven, pour the melted chocolate mixture over the hot coconut layer and spread it out evenly with a spatula.  Let cool for about 30 minutes, and then place the pan in the freezer for a few hours to allow the baked goods to firm up.Once they're firm, remove the baked goods from the pan by simply lifting up the parchment paper edges.  Place the whole thing on a cutting board and slice into squares with a large, sharp knife.  Let the squares thaw a little longer, then serve and enjoy (or freeze the squares to save them for a later date).


Star Cookies
(adapted from this recipe from Elana's Pantry)

In a smaller bowl, whisk together the melted coconut oil, maple syrup, and vanilla. Add the wet ingredients to the dry ingredients and mix well. (The dough will appear quite crumbly at first.)

Use your hands to further mix the dough, then divide it into two equal parts. Form each part into a ball and flatten it slightly. Wrap each part in plastic wrap and place it in the refrigerator to chill for at least an hour.

Roll out the dough between two pieces of parchment paper, to about a quarter of an inch thick. Cut out stars from the dough using a cookie cutter, and place the stars on parchment paper lined baking sheets. Scatter a pinch of candy sprinkles the top of each star. Bake stars in the preheated oven for 6 to 8 minutes, or until they are lightly golden around the edges.

Cool cookies completely and serve, or store them in tightly sealed containers in the freezer for later.

Cashew Butter Balls
(adapted from this recipe from Oh She Glows)

1 500g jar of natural cashew butter5 tbsp pure maple syrup2 tbsp coconut floura pinch of sea salt2 85g bars of dark chocolate (at least 70% cocoa), chopped1 tbsp coconut oilScrape the contents of the jar of cashew butter into a mixing bowl, and stir it to blend in any oil that has separated.  Add the maple syrup, coconut flour, and sea salt to the cashew butter and mix all ingredients well. The mixture should be firm enough to roll into balls, but not too dry looking.Roll a spoonful of the mixture in your hands to form a ball that is about one inch in diameter.  Place the ball on a parchment paper lined baking sheet, and repeat this process until all of the nut butter mixture is rolled.In a small saucepan over low heat, melt the dark chocolate and coconut oil together, stirring often. Once the chocolate mixture is melted, remove it from the heat immediately, then coat the cashew butter balls in the chocolate by placing them on a fork one at a time and dipping them into the pot. Remove any excess chocolate by tapping the fork on the side of the pot, and then carefully place the dipped cashew butter balls back on the baking sheet.Once all of the nut butter balls are dipped, place the baking sheet in the freezer for about 15 minutes, or until the chocolate is firm.  Remove the pan from the freezer, and decorate the top of each cashew butter ball by drizzling a little of the leftover melted chocolate across it using a small spoon or fork. Return the cashew butter balls to the freezer again to firm up the drizzled chocolate.

Serve at room temperature in holiday themed mini cupcake papers, or store the cashew butter balls in a tightly sealed container in the freezer for later.

Thumbprint Cookies
(adapted from this recipe from Elana's Pantry)

Preheat the oven to 350 F. In a large bowl, combine the almond flour and sea salt.

In a smaller bowl, whisk together the grapeseed oil, maple syrup, and vanilla. Add the wet ingredients into the dry ones and mix until well combined. Cover the dough and chill it in the freezer for 30 minutes.

Roll the chilled dough into 1 1/2 inch diameter balls and place them on parchment paper lined baking sheets. Flatten each ball to about a half inch thickness with the palm of your hand. Using a finger or thumb, make an indentation in the centre of each cookie.

Sprinkle the top of each cookie with finely chopped walnuts, then carefully fill each indentation with a small spoonful of raspberry jam.

Bake cookies in the preheated oven for 5-7 minutes, or until they are golden brown around the edges. Cool and serve, or store them in a tightly sealed container in the freezer for later.

one 500g jar of natural cashew butter2 tbsp ground chia seeds mixed with 6 tbsp water (stir and let stand for a minute to form a gel)1/2 cup pure maple syrup2 tsp vanilla extract1 cup blanched almond flour1/2 cup cocoa powder1/4 tsp sea salt1/3 cup chopped walnuts1/3 cup unsweetened large flake coconut1/4 cup chopped dark chocolate
4 candy canes, crushed (I use TruJoy Sweets ones, which have no artificial colours or flavours.)Preheat the oven to 325 F.  Line a 9 by 13 inch baking pan with two pieces of parchment paper, one placed over the other in opposite directions.
Add the cashew butter, chia seed mixture, maple syrup, and vanilla to a large mixing bowl and beat these ingredients with an electric mixer until they are well combined.In a smaller bowl, combine the almond flour, cocoa powder, and sea salt. Gradually add the dry ingredients to the cashew butter mixture, beating with the electric mixer after each addition.Spread the batter into the prepared baking pan, using the back of a spoon to press it down and smooth it out evenly. Sprinkle the chopped walnuts, coconut flakes, dark chocolate bits, and crushed candy canes on top of the batter. Bake in the preheated oven for 30 minutes.Let the brownies cool completely. Lift the edges of the parchment paper to remove the cooled brownies from the pan, place them on a large cutting board, and cut them into squares using a sharp knife. Serve, or store the brownies in a tightly sealed container in the freezer for later.

1 500g jar of natural hazelnut butter (or almond hazelnut butter)
1/4 cup of honey1/2 cup of cocoa powder
1 tbsp coconut flour1/2 cup of finely chopped raw hazelnutsunsweetened shredded coconut (for coating)In a bowl, stir together the nut butter, honey, cocoa powder, coconut flour, and chopped hazelnuts until well combined.  Cover and chill the mixture in the refrigerator for 30 minutes.Roll the mixture into bite-sized balls, then roll each ball in shredded coconut to cover.  Chill the snowballs before serving, and store any leftovers in a tightly sealed container in the refrigerator, or in the freezer to enjoy later.

I hope having all of these yummy recipes in one place will make your holiday baking easier!