I've loved having the boys home with me all this week for March Break.  Not because we had any really big or exciting plans together -- other than a fun-filled first weekend that involved my brother Jamie and his two children coming to visit, and celebrating Will's birthday with his friends at a rock-climbing gym, our week off has been pretty low-key -- but because it is exactly when Noah and Will don't have much planned to do at all that they come up with the most creative and entertaining plans of their own.

One afternoon this week the boys were headed outside to play some sports in the driveway.  There were still snowbanks everywhere in the yard, but the asphalt was clear and dry, and the boys were itching to feel the freedom of running shoes on their feet after a long winter of heavy boots.  I agreed that they could wear their shoes, on the condition that they did not step foot in the snow while they were wearing them.  If they were going to go in the snow, they had to come back in to get their boots.

Now I know as well as you do that there is no way two boys can really stay out of the snow when they are playing with tennis balls, basketballs, and hockey balls that are obviously going to fly out of the driveway at some point during their games.  But I didn't hear from Noah or Will for well over an hour, so I figured maybe they had somehow found a way to contain the balls effectively.  When the boys finally came back inside, they were both looking at me with sheepish grins on their faces, and Will quickly said, with a little too much enthusiasm, "We didn't step in the snow!".  I inspected their feet and the bottoms of their jeans, which all still seemed dry, and I would have just left things there, except that the boys couldn't bear not to tell me about their accomplishments outside.

Their tennis ball had gone over the roof into the mounds of snow in the backyard.  Instead of coming inside to get a pair of boots on, Noah decided he could avoid stepping in the white stuff by using his snowboard to hop laboriously across the drifts.  This initially worked really well; Noah was able to get over to the tennis ball and pick it up, but then suddenly he found himself with no way to get back, because he couldn't turn his snowboard around without stepping on the ground.  He called to his accomplice, Will, who was eagerly watching this whole scene unfold from the garage door, and Will tried to throw his own snowboard over where Noah could reach it.  His throw was unsuccessful, so Noah told him to get a hockey stick next.  Will did, and then hooked the hockey stick through his snowboard to drag it back towards himself so he could chuck it towards his brother again.  The second throw made it to the target, and Noah was then able to use what he called his "bridge technique": he walked across Will's snowboard, then grabbed his own from behind and placed it in front of Will's to walk on next, and continued this pattern until he made it back to the garage.  They used this process repeatedly for all of the other balls that flew over the roof that afternoon, too.  The boys were pretty proud of their creative solution that allowed them to go in the snowy yard AND still keep their shoes on!

Our week has been full of innovative ideas and projects of various sorts, and the happiness I've felt being able to observe and take part in the boys' fun has made me not mind the copious amounts of household supplies they've used up in the process.  One day Noah kindly made a house out of Kleenex on the bathroom counter for a ladybug he found wandering aimlessly on the floor: 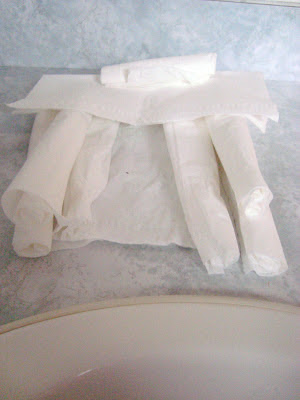 With their cousins, the boys used up every saved shoe box and roll of painting tape in the house to fashion armour for themselves before they strategically launched foam darts and arrows at each other: 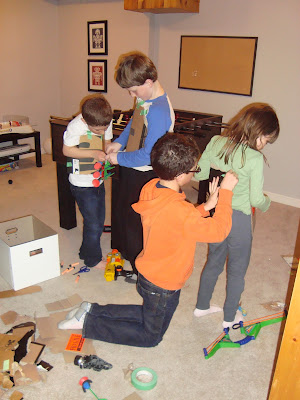 Noah and Will used wads of Scotch tape this morning to attach a Lego man to a flying fan so they could blast him "to new heights" using a Snap Circuit set that they had rigged with every battery pack they own: 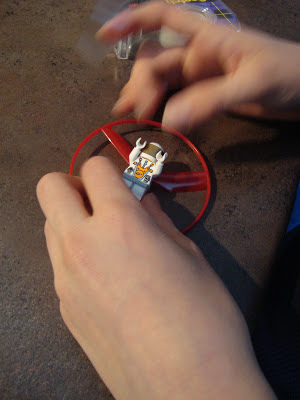 And one evening, Noah used string and his remote control car in an ingenious plan to get our portly guinea pig to exercise a little more. 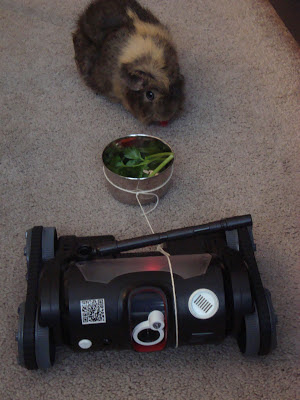 (Yes, that is the piggie's vegetable bowl attached to the car.  I would write more about how the pig kept following the car around, but the little video below is far more hilarious than any description I could write.  We laughed so hard over the results of this idea!)


The four of us really enjoy travelling to new places and participating in activities away from home sometimes; these things are fun and exciting and provide us all with wonderful learning opportunities. But our quiet week at home together has reminded me once again that there is something so important about children having significant periods of unstructured free time to think, dream, create, and play as they wish, too. This week, Noah and Will's imaginations took all of us to delightful places we never knew existed, sometimes before we were even out of our pjs.