One evening later this week I'll be attending a book club meeting with a group of friends. (We're reading Elizabeth Hay's His Whole Life, a book so beautifully written that I'm reading it a second time this week just to savour the images and feelings it evokes.) Our once-a-month meetings are as much about friendship and food as they are about discussing literature; everyone brings along an appetizer or sweet treat to share and we always spend an enjoyable few hours catching up with each other.

While thinking about what food to bring for this month's meeting, I remembered an old favourite brownie recipe I used to make years ago from the Better Homes and Gardens' New Baking Book. Those rich brownies, topped with chocolate chips, toffee bits, and nuts, were a definite crowd-pleaser, and I was curious to see if I could create a new version of them that was free of gluten, dairy and eggs. My curiosity paid off: the dark chocolate cashew butter brownies that came out of my oven today were every bit as scrumptious as the ones I remembered loving long ago. I'm happy to be able to share this classic treat with Will now, too! 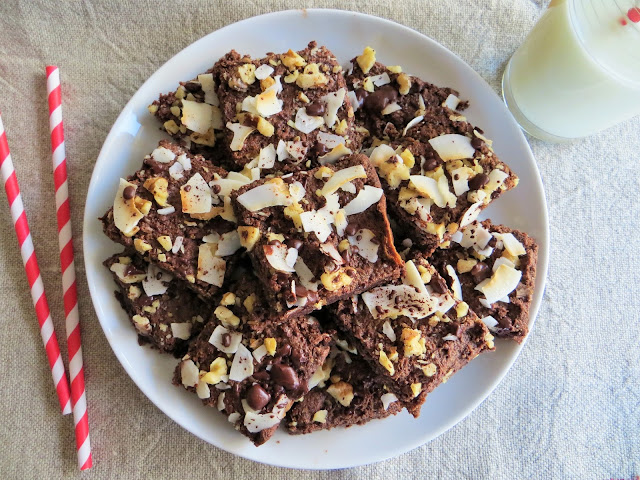 Preheat the oven to 325 F.  Line a 9 by 13 inch baking pan with two pieces of parchment paper, one placed over the other in opposite directions.

Add the cashew butter, chia seed mixture, maple syrup, and vanilla to a large mixing bowl and beat these ingredients with an electric mixer until they are well combined.

In a smaller bowl, combine the almond flour, cocoa powder, and sea salt. Gradually add the dry ingredients to the cashew butter mixture, beating with the electric mixer after each addition, until you have a uniform batter.

Spread the batter into the prepared baking pan, using the back of a spoon to smooth it out evenly. Sprinkle the chopped walnuts, coconut flakes, and dark chocolate bits on top of the batter. Bake in the preheated oven for 30 minutes.

Let the brownies cool completely. Lift the edges of the parchment paper to remove the cooled brownies from the pan, place them on a large cutting board, and cut them into squares using a sharp knife. Serve and make everyone happy. (These brownies go perfectly with a cold glass of homemade almond milk!)

I'm looking forward to sharing these decadent brownies with my friends later this week. I think I'm going to have to bake a second batch before the book club meeting, though -- these ones sure won't last long at our house!
Posted by Lisa at 6:08 PM