This post is a piece of creative non-fiction I wrote for a CBC contest back in the winter. It didn't capture the attention of the judges, but I'm giving it a home here now because it's a meaningful story for my family, especially my mom and dad. Thinking of them and all the ways they give of themselves to bring brightness to others' lives.

Congratulations to the thirty-two excellent writers whose pieces were longlisted for the CBC's 2016 Creative Non-Fiction Prize. 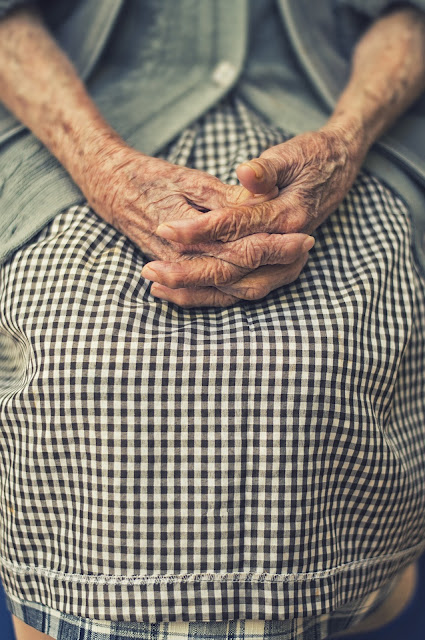 The phone rang shrilly three... four... five times, its sudden clamour piercing the stuffy air in the otherwise quiet apartment. Anxiety had often compelled her not to answer when random callers beckoned in recent years, but this time it was not her mind preventing her from moving toward the phone. She was a lonely prisoner in her own home, an old woman sprawled despondently on the floor, having fallen two days (or was it three now?) earlier. Her shaky limbs were too weak to follow the commands her panicked mind repeatedly barked out at them. As darkness slowly swallowed up the room once more, she struggled to recall when exactly her body had turned such a traitor.

“My Aunt Maisie’s in the hospital.” Mom’s voice was tired and sorrowful, the recent passing of her own mother weighing heavily on her heart. She hadn’t seen Aunt Maisie in years, she told me, and Maisie had said everything was fine on the occasions they had spoken on the phone. It was a sixth sense, or love, or maybe a powerful message from a mom who was gone but somehow still close by that told her to try the hospital when Mom’s repeated calls to her mother’s closest sister went unanswered.

“Her superintendent finally let himself into the apartment out of concern,” she explained. “Maisie will be moving into a nursing home once she’s recovered from her fall; she can’t live alone any longer. She’s giving me power of attorney and the keys to her apartment so I can take care of everything.” I waited during an empathic pause on the other end of the line. “She has no one else.”

Mom didn’t realize then the enormity of the responsibility she had just selflessly shouldered.

It seemed improbable that the weary old apartment was capable of holding so much. Chaos spilled out from every corner and cupboard, the accumulated treasures and debris of an abundant life nearly eight decades long. It might have been a gold mine of sorts for someone without any personal connection to the rooms or the woman who had lived in them for forty-four years, someone who could seek out the physically valuable items and leave the rest behind. For my parents, whose task it was to completely empty the place while respecting Maisie’s wishes and feelings, it seemed an indomitable mountain.

There were cabinets full of tarnished silver and smudgy crystal. Newspapers and years’ worth of mail sat stacked and unopened on tables and beds. Dead plants drooped in pots and a vase held the remains of spring flowers that had withered months before. Bags of garbage were piled by the door, and the fridge held shelves full of rotting food. Everywhere my parents looked there were heaps of both precious and trivial possessions: new curtains and bedding lying across the couch, an endless supply of Swiffer dusters that nodded ironically at the inches of dust covering everything, a television sitting on an empty cardboard box, smiling collectible figurines and faded photographs. Mom walked the narrow pathway that led to the one empty bed in the apartment and felt a suffocating wave of hopelessness.

Aunt Maisie had always been a meticulous woman, Mom told me. I, too, remembered her spotless apartment from the few times I had visited it as a child, and the flawless way she had always presented herself with elegant hairstyles, clothing, jewellery, and make-up. It filled my mother with despair to imagine how Maisie’s life had fallen into such a sad state of disarray as her aging mind faltered. Scattered over many of the apartment’s surfaces were notes written in Maisie’s shorthand, a skill honed during her career as a legal secretary. My parents studied the cryptic scribbles intently, hoping to understand some small part of them, but the messages offered no clues about how they should proceed. There are no instructions for how to disperse the earnest collections of a family member’s life once she’s grown too old to take care of it herself.

Over the three months that it took my parents to empty the apartment, my mom found her own powerful memories resurfacing from the jumble. Old photographs allowed her to feel once again the warmth of familiar eyes and long-gone smiles; her mom’s pretty cursive flowed from cards and letters mailed to Maisie in the years following their reconciliation after a drawn-out, hurtful family dispute. She uncovered Maisie’s famous trifle recipe and the bowl that had held the festive dessert at many happy family Christmas celebrations long ago. Running her fingers along the surfaces of these intimate objects brought tangible proof that what she had lived and remembered was real.

I was at the apartment the day that Mom found a pretty hat box way up high in a closet. We carefully removed the lid and stood for a moment in reverent silence, staring at the small, ruffled dress and the love-worn soft monkey laid carefully inside. These had belonged to Maisie’s only daughter, who was stolen from her at the tender age of seven. A jealous river had pulled the little girl through a crack in its frozen surface and smothered her in its icy embrace.

Mom sighed with sadness and gently placed the lid back on the box. “I can’t make a decision about this. It’s not mine to say goodbye to.” The box would be one of the items brought to Maisie’s new home at the retirement residence, where she would build the last stages of her life from the fragmented objects and memories that remained. I wondered if for Maisie it was distressful, or a relief, to have family members free her of the weight of her life’s possessions, and a failing memory sporadically release her from old ghosts that might haunt her.

In the final days of sorting, clearing, and moving things from the apartment, a key to an unexpected off-site storage locker revealed well-remembered treasures from Mom’s grandmother’s house: a crystal bowl, a silver teapot and a collection of dainty china cups, a small cat figurine that my mom had wanted as a keepsake and that a then-bitter Maisie had denied her at my great-grandma’s last garage sale. The contents of the apartment and locker revived old heartaches and buried anger for my mom, but she let them go. She passed on the pieces and stories she felt were worth keeping to younger family members who would appreciate them, and with relief, she allowed everything else to leave freely. “You forgive,” my mom would explain to me several months later. “You don’t forget, but you forgive.”

Aunt Maisie is never far from Mom’s mind now. She visits her regularly, shops for what Maisie needs, takes her to medical appointments, coaxes her to get dressed and leave her room when anxiety has prevented her from doing either. It’s not easy, Mom tells me; she’s had to find much patience and understanding within herself. On good days, she knows Aunt Maisie appreciates her. Sometimes she just feels she’s being taken for granted.

“I don’t want to end up like that, confused and in pain.” Mom has shared these fears with me many times before. “I don’t want any of you to have to take care of me.”

But this, too, is a part of life for many of us. We spend years building and creating, then stand by helplessly in old age as some of it crumbles or fades away. We make mistakes as we stumble through youth, then make amends as time and perspective help us gain understanding. Eventually, many of us will forget, leaving others who come after us to pick up the loose threads and continue weaving a complex family history.

There will likely come a time when it is my turn to bring comfort and support to aging family members. I’m certain of what I will remember then: the generosity and tenderness of my parents caring for an elderly aunt when she needed them, a powerful image of unconditional love.