I know I just recently wrote a post about what to do with an abundance of apples this time of year, but I couldn't resist sharing one more recipe after the delicious apple crisp we had for dessert yesterday!  The crispy, chewy, cinnamony crust combined with the natural sweetness of fresh-picked apples was a perfect finish to our festive fall meal. (Yes, we did eat pumpkin pie, too, but who's counting desserts when it's a holiday, right?) 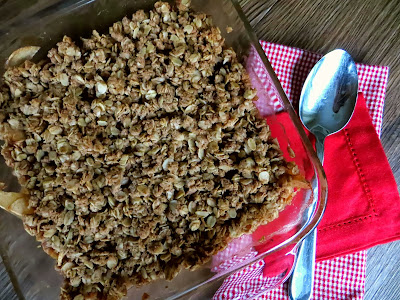 To make the filling, whisk together the apple juice, lemon juice, arrowroot powder, and cinnamon in a large bowl. Place the sliced apples into the bowl, toss them with the apple juice mixture, and then transfer them to an 8-inch square baking dish.

To make the topping, combine the almond flour, oats, sea salt, and cinnamon in another mixing bowl.  Melt the coconut oil in a small saucepan over low heat, then remove the oil from the heat and whisk in the maple syrup and vanilla extract.  Add the wet ingredients into the almond flour mixture and stir until well-combined and crumbly.

Sprinkle the topping over the fruit. Cover the dish with aluminum foil. 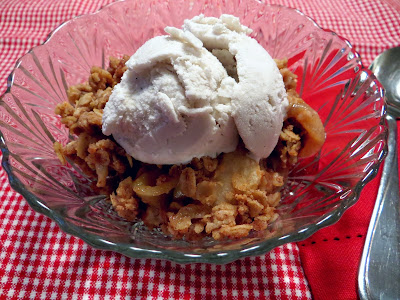 This dessert is absolutely scrumptious served with a scoop of vanilla coconut milk ice cream on top. Matt, the boys and I can't wait to have the leftover apple crisp again tonight after dinner.... if we can wait that long! I hope you and your family enjoy this treat as much as we did.
Posted by Lisa at 12:45 PM