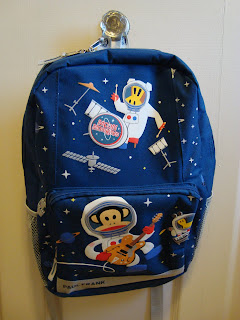 I have just figured out how to make my fortune: I'm going to sell tickets to people to come and watch the circus that happens at our house most school mornings while I try to get the boys out the door on time. The shenanigans would surely be highly entertaining to outsiders!

Now, I am an uber-organized person by nature. The night before every school day, I make the boys' lunches, iron their clothes and lay them out neatly so that all they have to do is put them on in the morning, and make sure that their books, papers, and supplies for the next day are neatly stacked in their backpacks by the door. One would think that the morning should be a very smooth operation then, a process that runs as well as a precision time instrument. The reality is more like an attempt at herding cats.

Take this morning for example: Will, having been up since before 6am as usual, had every craft supply known to humankind scattered across the family room floor by the time I got out of the shower, and was attempting to construct a working rocket out of toilet paper rolls and pipe cleaners. It took multiple attempts to drag Noah out from under the dark blanket cocoon he wraps himself in when he's sleeping, and several more rounds of calling his name before he actually appeared groggily downstairs. Breakfast was a long, drawn-out affair, because apparently it's impossible to eat when you are contemplating out loud how to calculate the number of seconds in a year and who Jesus's mother is in heaven.

I thought we were in the clear when the boys headed upstairs to get dressed with what should have been enough time to spare. However, moments later, I heard Noah's muffled voice calling, "Wow, this shirt is hard to get over my head.... Could I get some help here, please?" I looked upstairs to see Noah, looking like a deranged octupus with arms and sleeves and head and hood waggling everywhere, and realized that he was trying to stuff himself into his brother's two-size-too-small clothes. Really? How is it possible that he wouldn't recognize his own clothes two months into the season?

The boys' teeth-brushing process was another side-show, with electric toothbrush dance moves in the mirror and toothpaste flying everywhere. We might still have made it out the door on time had Noah not been so absorbed in a book that he didn't hear me call him the first three times, and we might not have had to run the last bit to school if Will hadn't been so intent on finding the perfect stick for a snow fort he's designing in his head two months in advance.

Incredibly, we made it to school on time today, and we have yet to be late any day, despite the inadvertent attempts by the boys to sabotage my carefully laid morning plans. It is nothing short of a miracle.

Someday, though it may be awhile away yet, I'm sure the boys will figure out how to get themselves out the door on time and without incident. Oddly enough, when that happens, I'll probably wish the circus was still in town....
Posted by Lisa at 9:07 AM