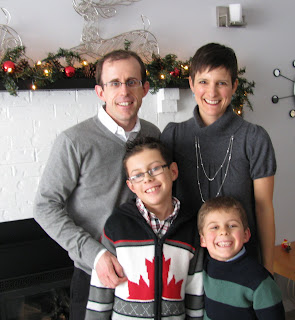 With the exception of Maggie the cat, who is far too much of a drama queen to be any good to me as a female companion, I am the only girl living in my house. Usually I don't give this fact a second thought; I love all my boys and there is something very sweet about their kindness towards me. I will admit, however, that there are certain times when I feel like an alien in my own home, a visitor to a strange land where the behaviours of the male inhabitants are bizarre, unexpected, and incomprehensible.

From the moment our little family was complete with the birth of our second son, I expected the general direction of family life to head far into the male domain. I have since sat through endless talk about baseball, hockey, and video games without batting an eyelash, and have good-naturedly spent hours sitting on the floor re-enacting battles with Playmobil knights and pirates. For the most part, I feel like I have a pretty good understanding of what makes the boys tick. There is no part of my female mind, though, that could comprehend what I recently witnessed Noah and Will doing.

The boys were entertaining themselves in the basement rec room one weekend afternoon, playing mini stick hockey and the like. At one point, the sound effects turned to a series of thumps followed by crazy laughter. (Now, if you're a female, you know already that those sounds mean things aren't going to end well.) Before I could get downstairs to investigate, the sounds changed to Will screaming in agony and Noah alternating between "I'm sorry"s and "Are you okay?"s. (See, I told you.) I noticed, while trying to sort things out, that the boys each had a throw pillow stuffed up the front of his shirt, and (silly me) I dared ask them why. Apparently they had thought it would be great fun to run and smash into each other, figuring that the pillows would offer them an immunity to injury. Now, these are two very intelligent young boys I have; what on earth would possess them to think this was a good idea? Even Matt was chuckling about the boys' unfortunate event once he was out of their earshot. I think it appealed to the long ago little boy within him (who incidentally once smashed himself through a glass door in his house growing up while amusing himself by running in socks and sliding on a smooth floor.)

There is something about the way a boy's mind works that I may never be able to understand. I will accept and even embrace that fact, because sometimes my boys' minds work in wonderful ways: Noah spent a long time last night explaining inventions he had thought of for taking care of household tasks for me, and Will thinks often to make me pretty flowers and jewellery out of paper and beads and things. My boys may almost give me heart failure at times with their crazy antics, but more importantly, they fill my heart with so much joy. I can't imagine my life any other way.
Posted by Lisa at 2:10 PM