Thinking... outside the box 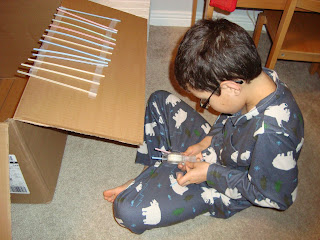 Those of you who have ever had children in your life may be familiar with this scenario: you carefully choose the perfect toy as a gift for a special young boy or girl and are sure it will be an instant favourite... and the child ends up being more fascinated with the box that the toy came in. To be fair to boxes, they are pretty spectacular playthings. Pair a box with a big imagination and you have many hours of fun and adventure!

We came to have several wonderfully large boxes at our disposal this past weekend, and the boys were completely thrilled! As soon as they saw the vast cardboard canvases, they excitedly began talking big plans with one another. I had to quickly redirect Noah's first brainwave; he was figuring how he could get his hands on a massive, strong rubber band so that he and Will, while sitting in one of the boxes, could somehow launch themselves into flight. It sounded, well, dangerous, and I honestly didn't put it past Noah to actually find a way to make it work! Thankfully, they settled for designing less life-endangering machines: Will made a rocket and Noah a "transmogrifier/duplicator". (Don't ask. I have no clue.) They busied themselves for a good part of the weekend drawing control panels and fashioning joysticks out of straws and styrofoam balls, and then acting out wild escapades using their newly built contraptions. 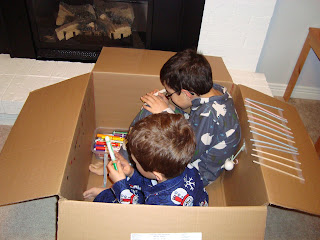 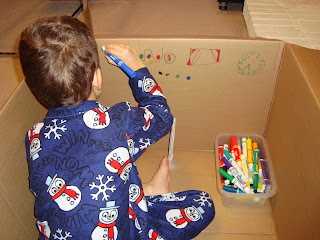 Some of the boxes we had were so large that Will needed help getting in and out of his. He would quietly colour away inside the box for awhile, and then we'd hear a muffled little voice calling, "Can someone please get me out of here?". Matt and I laughed at the time about our energetic son being contained in his cardboard box (and had an old Corey Hart song going through our heads for hours afterwards!), but really, what a perfect secret hideaway for a boy to do some thinking and dreaming! That box was Will's alone; he was as happy as anything tucked away in his little piece of "real estate", with no one to tell him how to decorate it or how tidy it had to be kept. 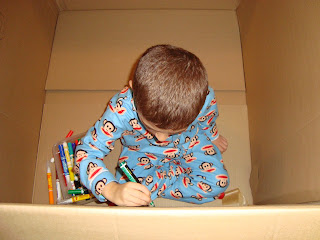 In an age where there are so many complicated, expensive gadgets for kids to play with, the humble box still easily manages to claim its spot on the A-list of toys. The next time you hear children complaining of boredom, go ahead and bring them to a toy store -- just don't buy them anything new. Ask a sales associate instead if they have extra boxes to give away. It might very well be the best money you never spent.
Posted by Lisa at 9:35 AM