From the school of hard knocks 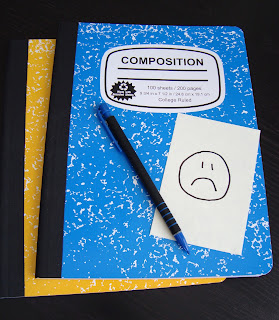 My week started off on an unhappy note this morning.  Actually, make that two unhappy notes, because that's how many I wrote before sending my boys off to school.  Both Noah and Will were affected recently by other children's rough behaviour in the school yard, and while I like to teach my boys good strategies for standing up for themselves and resolving their own conflicts peacefully, I felt this was one of those times where they needed some grown ups to step in and help them.

The first letter went to Noah's teacher, because last week, another grade five boy tried to grab Noah's glasses off his face to see if they were the same prescription as his own.  In the process, he knocked Noah's glasses to the cold pavement.  Noah's two lenses are now significantly scratched and dinged, to the point that they both need to be replaced.  I don't think the boy's intent was harmful, but his actions have left Noah with irritating spots in his line of vision until his new lenses come in, plus the bother of having to go back to the optician's.  It seemed important to me that this other boy know the results of his actions, so that hopefully next time, he'll remember to keep his hands to himself.

The second letter was for Will's teacher, because Will and his buddy have been dealing with an aggressive boy in their class who has been giving them a hard time.  Despite Will's efforts to explain to this boy that they don't like the way he's treating them, the boy continues to steal their hats, demanding that they chase him to get them back, to hold them captive against the school wall with his arms (which are much bigger than either Will's or his friend's), to force his way into their conversations and games when they've told him that they just want to be left alone.  My rule-following Will has been struggling to understand why this boy can't learn how to be nice.  While Will's determined to keep trying to teach him, I knew it was time he got some support.

I'm struggling myself with what to think and how to feel about these two situations.  On one hand, I know it's not my place to judge other children and their families.  I don't know either of these other boys very well, and I have no understanding of the circumstances that may have led either boy to behave the way he did.  I know it's not reasonable to place my values and high expectations for my own boys' behaviour onto others (and we all know, too, that sometimes, regardless of what a parent's expectations are, children just make some poor choices).  My own kids aren't perfect, but the mama bear in me can't stop thinking that neither of my boys would ever treat other children the way they've been treated this past week, and I can't help but want to roar.

I'm angry that we have to deal with the cost and inconvenience of replacing Noah's lenses because of another child's impulsive actions.  I'm sad that Noah has to feel uncomfortable about discussing the incident with his teacher now that I'm aware of the damaged glasses (because my peace-loving boy would have been quite happy just letting the whole thing go unnoticed).  I'm outraged that my pint-sized Will and his quiet little buddy have been pushed about by a much bigger, rougher boy, and heartbroken that at seven years old, Will has to come to me so seriously and maturely after school, to ask me to please help him figure out the best way to handle his situation, because he's never been bullied before and is not sure what to do (his words).

The letters I wrote to the school were not angry; they were calm, reasonable, and non-judgemental, and I feel confident that the boys' wonderful teachers will deal with the issues effectively.   The black and white words on the page, though, were a front for the red I'm seeing today.  I'm aware that life is full of unpleasant situations that we have to deal with; adversity helps us all to grow and to learn, and sadly, those hard lessons begin in childhood.  I know I can't raise my boys in a bubble to protect them, nor can I always control the interactions they have with others.  Honestly, though, this is one of those times when I sure wish I could.  The school of hard knocks isn't any fun at all.