The little blue bike sits untouched and lonely in the dark garage.  It thinks back to several years ago, when a boy would come every day to take it out exploring, would push his feet furiously on its pedals to make the wheels spin faster and faster, making it seem sometimes as if both boy and bike would lift off into the warm air above them.  It was a wonderful feeling of exhilaration and freedom, and the bike longs to know it again.  But day after day, no one comes. 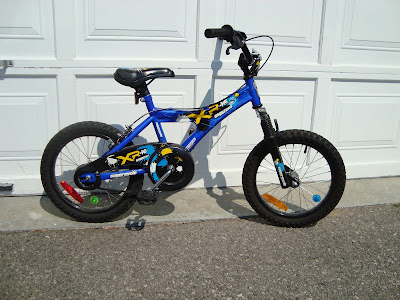 ***
Ever since we removed the training wheels from his bike a few summers ago in an effort to teach him how to cycle without them, Will has become a very reluctant rider.  Matt and I have spent months over three summers now trying to convince Will to give it another go, to come out and practise regularly so that he will gain confidence and come to love the feeling of zooming along smoothly on two wheels, but Will has remained stubbornly opposed to the idea.  He has given us many reasons for not wanting to ride:  that he just doesn't feel like it right now, that he's just too busy, that he can run just as fast as he can move on a bike so he doesn't need to ride.  While we've been able to coax him out practising enough times over the past few years to get him riding around the block on his own, each session has been painful for all of us, filled with protests and frustration and tears.  I've been so puzzled by Will's opposition to learning this skill, when by nature he is so full of energy, so focused on physical activity, and so eager to develop his independence.

The past few months, Will has flat-out refused to ride his bike at all.  When I tried to find out why in a kind and quiet conversation with him one day, he looked at me with worry in his deep brown eyes and told me he was afraid of breaking his arm and needing a cast if he fell.  I'm not sure exactly where this idea came from, but I have experience now in helping Will work through these kinds of anxieties, which are not new to him.  I've been using the strategies we've been taught to help him, and have had him find facts that would let him realize that most of the time when people ride bikes they don't break their arms.  I thought that if Will had a more balanced view of the situation, it would allow him to let go of that worry a little so he would be able to give his bike another spin.  But still, often when the subject of bike riding has come up in recent weeks, Will has yet again mentioned with great concern the possibility that he could break his arm.

A few evenings ago, Matt got an email message from one of his brothers, telling us that his wife was in the hospital after having an accident on her bike earlier that day.  Her front wheel had got caught in a streetcar track; she flew off her bicycle and landed hard on her wrists and arms.  Her right wrist now has two broken bones, and her left arm has a broken forearm bone and a badly dislocated elbow as a result.  She has had to have surgery to have various plates and screws added to her arms to stabilize them, and she is in casts that go up past her elbows on both arms to keep movement to a minimum for the next while.  (I know, doesn't that sound awful?  Poor girl.)

It freaks me out more than a little bit that out of all of the injuries Will could have imagined to keep him from bike riding, he has consistently worried about breaking his arm, and now a family member has broken both of hers doing that very activity.  It's as though my always keenly observant and perceptive boy could see exactly what was going to happen before it did.  One thing is clear:  when the details of this sad accident reach Will's ever-listening ears, that little blue bike in the garage is going to be waiting a long, long time for a rider.