Yesterday evening the weather was just perfect for sitting outside, so Matt and the boys and I decided to use our outdoor table to play a few rounds of Bananagrams together.  (We figured since we're going to visit my mom and dad soon that we should get practising our skills in this word tile game, and hopefully avoid being shamefully defeated time and time again by the Bananagram pros like last summer!  Look out, Mom and Dad!)   Noah and I went outside ahead of Matt and Will and started setting up the tiles.  Alas, as I was shuffling them around, one of the tiles managed to slip down the umbrella hole in the centre of the table, and milliseconds after that, we heard it click as it landed on gravel.  By some crazy fluke, the tile had also managed to fall sideways through a space between two boards in the deck floor and had completely vanished from sight. 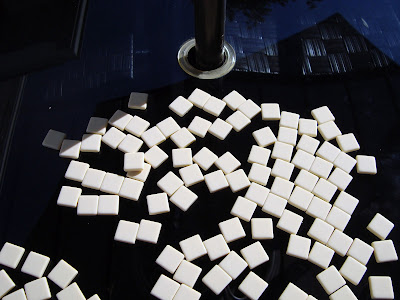 You might be thinking this is not a big deal, because we could just go under the deck and retrieve the tile, but let me show you how much clearance there is between our deck floor and the ground: 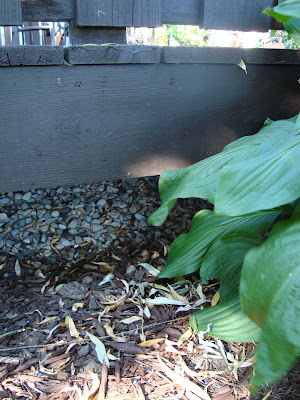 We are all small sized in this family, but none of us is that small!

Do not fear, though, friends.  We happen to have experience in under-the-deck rescue missions. Will lost a cherished Lego part in the same place a couple of years ago and we already had that successful retrieval under our belts, so Noah and I quickly sprang into action.  I crawled under the patio table on my hands and knees to see if I could locate the precise whereabouts of the tile.  (In case you're wondering, it was a letter T tile; rather crucial for the game, I think, especially if you need to make the word "qat" when you get stuck with a q and no u.)  Noah ran inside to get a flashlight to help make it easier for me to see in the darkness under the deck boards.  Matt noticed me lying under the table from inside (I'm guessing he was wondering what bizarre new variation of Bananagrams we were working on), so he came outside, and, after hearing what happened, asked if we needed the specialized equipment.  When I said that indeed we did, he disappeared briefly and came back with this: 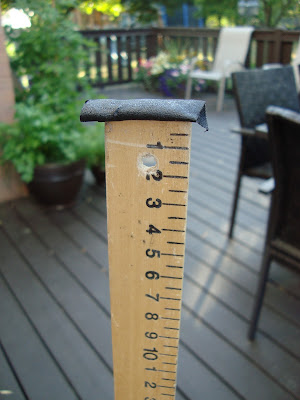 A metre stick with a bit of hockey tape on the end = highly specialized equipment.

When I spotted the tile (a very difficult feat, I might add, since I only had about a half-inch viewing window between the deck boards), I took the magic metre stick, carefully pushed it through the space in between the boards without disturbing the tape, and pushed the sticky end onto the face of the letter tile so that I could pick it up. 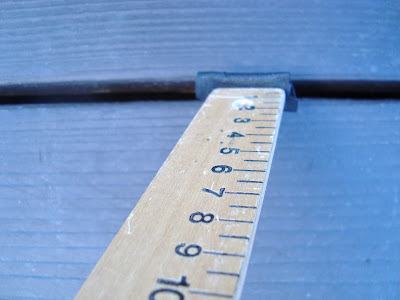 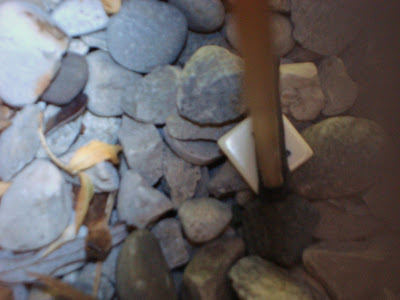 Are you about to cheer now because all I have left to do is pull the tile up through the boards and I will have saved the day?  Well, that would be wonderful, except that it's not possible to pull a one-inch tile up through a half-inch hole when it's face-up.  But don't worry!  While we are small in this family, we are also very smart!  I slowly tilted the metre stick on an angle from the top of the deck so as not to dislodge the tile, and then pushed it as far out as I could towards the deck's edge.  Matt ran down to the lawn and reeeeeached under the deck as far as he could from the side.... and managed to grab the runaway tile with the tips of his fingers! 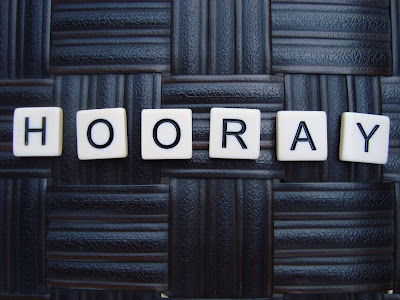 Try to contain your excitement.  I know it's hard after reading such a thrilling tale of suspense and adventure!

Whoever says word games are for nerds has never played Bananagrams at our house.  You need to be nothing short of a superhero to play with this family.  ﻿ 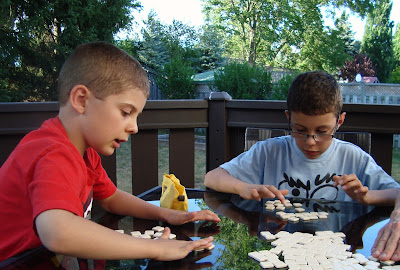