The boys' school has a wonderful grassy field where all of the children can play soccer or girls chase the boys or whatever other game or sport it is kids play these days when they are outside for recess.  Well, I should say that the field is wonderful and grassy until this temperamental time of year, when it rains and then snows and then gets warm and the snow melts and then it freezes over when the temperatures drop and then melts again, and so on, after which the field becomes nothing but a huge pile of muck. This is the school field as it has been looking for the past several weeks: 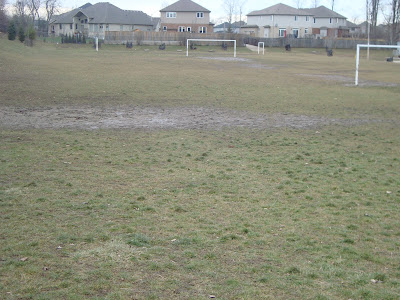 Wait, let me give you a closer view for full effect: 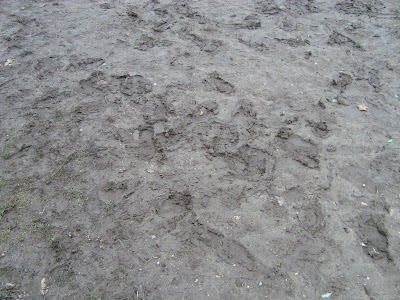 You can imagine what my children look like after a day of playing on this field.  Every day I stand outside the school doors waiting for Noah and Will to emerge, and with every mud-caked child who comes out before them, I become more and more anxious about what I'm going to be dealing with.  Many of the children (swamp creatures?) are unrecognizable as they trickle out of the building.  Every article of clothing is the same uniform shade of earthy brown, and the shoes on the children's feet are oddly shaped because there are huge clumps of mud randomly stuck to various parts of them.  I'm guessing they could probably start teaching hands-on courses in agricultural practices in the school; with the amount of dirt that must get tracked in there daily, they could likely plant seeds in furrows down the lengths of the halls.

Most days, when Noah finally comes through the school doors, he, too is covered in a layer of muck from top to bottom, just like all of the boys in his class who came out before him.  He takes it upon himself to describe to me the various escapades that led to his mud-bath: how he slid in a puddle while he was catching a ball, or how he wiped out while he was running down a hill at the back of the field.  I try to be understanding of the boys' need to run and play hard despite the mucky field that wants to swallow them whole, but I have to admit that there is no part of my brain that can comprehend the joy they find in playing anything that involves wallowing in squishy gunk.

If you'll remember, I grew up in the more northern city of Sault Ste. Marie.  There was no mud on the ground by this time in December when I was a child.  We had three feet of snow under our boots as we played in our school yard a few weeks before Christmas; we were building snow people and forts and making pretty little snow angels on our field.   (Note:  it is possible that I might be exaggerating a little bit.  My mom is likely to tell me later that I am remembering things wrong, that there was plenty of mud in December when I was a child and that my two brothers found many ways to come home covered in it on a daily basis.  I may very well have just been a weird kid who didn't like getting muddy.  But real or imagined, I find myself longing for the snowy winters I remember from my youth, when kids wore boots because it was cold and snowpants because it was snowy, and they played in drifts taller than themselves and didn't come home looking like swamp creatures.)

Anyway, having been forced to accept that the muddy field is going nowhere soon and that my children do not have the good sense to stay away from it, I have decided to deal with the daily arrival of December swamp creatures at my front door in the best way my mess-intolerant self knows how:  with a carefully developed mud protocol.  The boys have now been diligently trained in how to remove their footwear outside when they are covered in mud, and to go directly to the laundry room (do not pass Go, do not collect $200) to remove any mud-coated articles of clothing and place them immediately in the washing machine.  On the plus side, I now have an 11 year old boy who can competently do his own laundry.  (His future wife can thank me later.)

The only other thing I can do is pray for snow.