Yesterday Will stayed home from school with me because he wasn't feeling well, so I put my plans to get groceries in the morning on hold until the evening.  I asked Noah to come with me after dinner, because he seemed to have a lot of energy and I knew that his good mood would make the task more enjoyable.  As the two of us were putting our shoes on at the front door, I looked out the window and saw a huge mass of ominous black clouds hanging over our house, and I mentioned to a t-shirt clad Noah that he might want to grab a jacket before we left.  He brushed me off (as he usually does these days whenever I suggest sensible clothing for the current weather conditions), telling me in an exasperated voice that it was hot out and he would be "fine".

I thought about this for a second, and then bit my tongue (a very difficult thing for me to do) and said nothing more.  As a mom of a tween who tries a little more each day to assert his independence, I am trying to learn to choose my battles, and this one didn't seem worth spending any energy on.  We headed out to the car and went on our merry way.

A few minutes later, the sky above us grew even darker and more threatening, and from the back seat I heard a faint little "Uh-oh".  I chuckled (was that mean of me?) and said with mock surprise, "Oh, Noah, it looks like it's really going to rain!".

Just as we pulled into the parking lot of the grocery store (and I joked that I should probably find a parking spot as far away from the store doors as possible), the heavens opened up and buckets of water came gushing relentlessly out of the sky.  Noah was laughing nervously now, and frantically planning a strategy for how he was going to get from the car to the store doors without drowning.  He took a deep breath, threw open the car door, and took off like lightning, shrieking in a hilarious panic as he attempted (unsuccessfully) to dodge the torrential downpour.

Once we were both inside (Noah looking sheepish and a bit like a bowl of cereal left standing too long in milk, and me looking smug and dry in my raincoat) we looked at each other and laughed crazily for a good minute together.  I could tell by the look on Noah's face that even though I hadn't made the jacket issue into a battle, somehow I had won.

They say that the best way to have children learn new ways of behaving is through experiencing natural consequences.  I can't think of a more natural consequence for refusing to wear a jacket when the weather calls for it than having to wring out your t-shirt in the grocery cart area and then walk soggily through the store aisles for the next half hour.  Thanks, Mother Nature, for helping me show my eleven year old (with no words at all) that moms still know a thing or two! 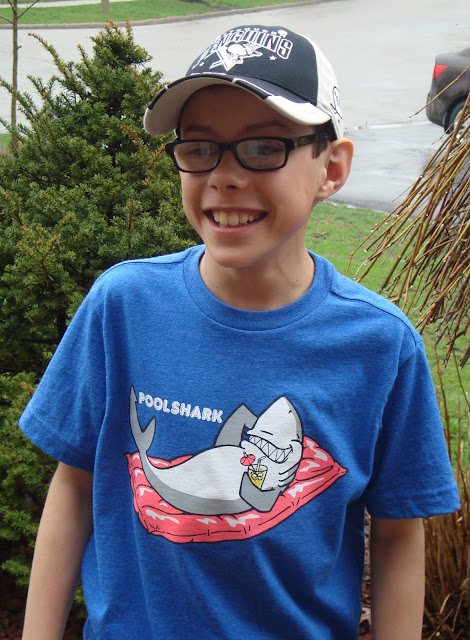