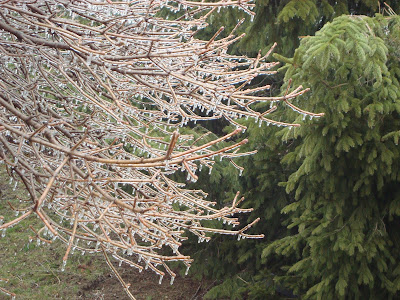 Last Thursday as I was getting ready to head to the airport before flying to Sault Ste. Marie, it was nine degrees and sunny outside in Kitchener-Waterloo.  There were finally only a few small traces of snow left in hidden corners here and there in our yard, and the grass was even beginning to turn a soft shade of green.  Robins were everywhere, heralding the arrival of warmer weather with their laughing songs, and the brown rabbits who all but disppear throughout the winter months had started making a daily appearance on our lawn once again.

As my plane began to descend near the Soo several hours later, I was greeted by the most unwelcome sight of white as far as the eye could see.  Snowflakes were swirling in the gray sky and there were banks and banks of crusty snow everywhere that simply refused to melt.  The airport parking lot was a mess of frosty slush after another very recent blast of winter, and I had to brace myself against a chill wind as I walked with my parents to their car.

The whole time I was in the Soo my dad and I joked about the weather (a subject we've teased each other about for years.)  He blamed me for the current conditions, saying I had somehow brought the snow with me and that the weather wasn't likely to improve until I went back home.  I grumbled repeatedly about having to wear BOOTS and a WINTER COAT in April, and reminded him that I had the good sense to live in a place now where April actually means spring.  I mocked the Soo's weather forecast for Wednesday and Thursday of this week when my dad told me that they were going to get another ten to fifteen centimetres of snow, and when I emailed my parents this past Monday to let them know I had arrived home safely, I made sure I pointed out that it was sunny at my house, and that I was wearing shoes while I walked on my green lawn.

Do you want to know what happens when you make fun of the weather misfortunes of others?  This. 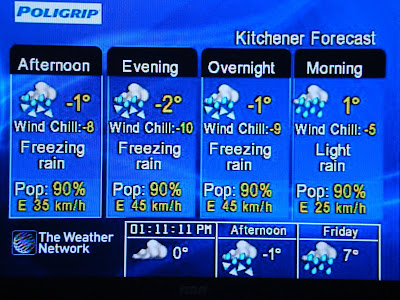 I woke up this morning to freezing rain, icy trees and roads, cold winds, and the announcement that schools were closed for the day due to severe weather.  Schools closed, on April 11th, in Southwestern Ontario.

Happy Spring, everyone!  (For the record, I stayed inside all day with the boys because I refuse to put on my winter coat or boots one more time.)  I think I can hear my dad laughing all the way from the Soo.