This past week has been one of relative quiet at the end of a month of happy busy-ness.  We've spent the first part of our summer travelling to visit friends at two different cottages, attending and hosting bbqs, having my brother and niece and nephew here with us for a few days, swimming, swimming, and more swimming, hitting the farmer's market a couple of times a week, and the boys attended a week-long engaging summer camp program at one of the universities here in town.  It has been heaps of fun so far, and now over the past several days we've settled into a bit of a peaceful lull at home before we head into our next round of summer plans.  I am happy for these more laissez-faire days in the middle of the summer, and you would think that after everything our family has done recently, that everyone here would feel the same way.  You would think.

Will (you knew it was going to be him, didn't you?), enjoyed about one day of "laissez-faire" and then declared that he was bored and didn't know what to do.  Granted, the weather hasn't been very nice at all of late, and so many of his favourite outdoor summer activities had to be put on hold.  But we do have a house full of Lego and K'Nex, of science and electricity kits, of books and games and puzzles and music, of drawing and art supplies, of random objects that could be turned into something else with a little bit of creativity. (I even stocked up on Scotch tape before the summer!)  Unfortunately, every time I suggested any one of these activities to Will, his response was a half-hearted, "Nah", and he continued to lament his lack of something to do.

This started to grate on my nerves after awhile, and so, out of desperation on a rainy afternoon this weekend, I decided to sign up for the Khan Academy (a pretty amazing and free online learning resource that I had heard about on a TED Talk months ago and kept meaning to look into).  I browsed around to see how the site worked, added Will to my account, briefly showed him how to find something he wanted to learn about, and then set him loose at the computer.  The way his face lit up about three seconds into the first lesson he selected, you'd think I had handed him a million dollars and a shopping spree at the world's best candy store.  He has since been absolutely riveted, figuring out equations in algebra and listening to chemistry lectures on atoms and the periodic table of the elements.  I can almost see the lightbulbs going off above his head as he pieces together concepts that are new and exciting to him.

I try really hard to give both of my boys lots of unstructured, free time in the summer to give them a break from the demands of school and extra-curricular life that they experience all the other months of the year.  It's now clear (and kind of funny) to me that what Will really wants in his free time is summer school! 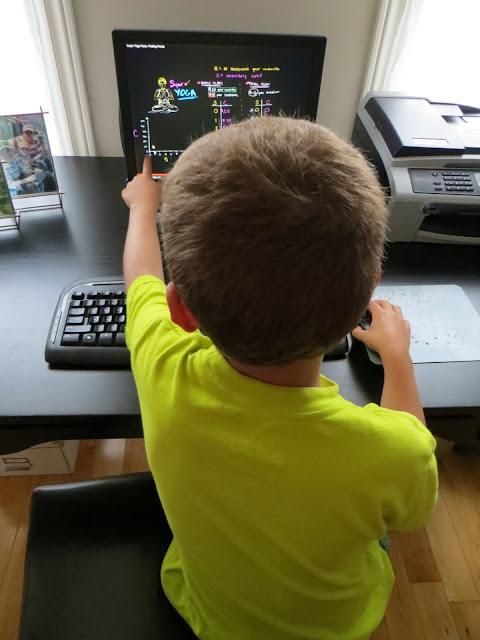