All in the name of science

It hardly seems like it can already be the last week of summer holidays, but here we are.  In the midst of soaking up the last sunny afternoons spent riding bikes and swimming together, the boys and I have also been getting organized for the new school year that is almost here.

One recent morning as we were about to head out the door to do a bit of back-to-school shopping, I asked Will to quickly run to his room and check if his pencil sharpener from last year was still in good condition.  He gave me an odd look, dashed off to his room, and less than three seconds later returned and said nonchalantly that he couldn't find it.  I rolled my eyes (because this not-being-able-to-find-stuff in his perpetually disorganized room is a common occurrence for Will), and headed up the stairs myself to see if I could have any better luck.  Will then raced ahead of me on the stairs, went straight to his closet and opened the doors, reached down and held up his pencil sharpener for me with a sheepish look on his face.  "Oh, HERE'S my pencil sharpener," he said, innocently and with mock surprise, as if he hadn't known all along exactly where it was.

I asked to see the pencil sharpener so that I could determine whether it was still useable for school this year, and I could sense panic in Will's eyes as he carefully passed me the little plastic container.  It didn't take me long to figure out why.  When I opened the lid, I was treated to the sight of a sludgy, pale gray liquid with floating bits of wood shavings in the base, and a spectacular display of mould growing on the sadly corroded metal sharpener.  I looked at Will with an inquisitive horror on my face, and he explained through tears that he was only trying to see if he could make his own pulp; he wondered if adding water to wood would cause the little shavings to disintegrate.  This "experiment" of his had been sitting in his closet all summer long. 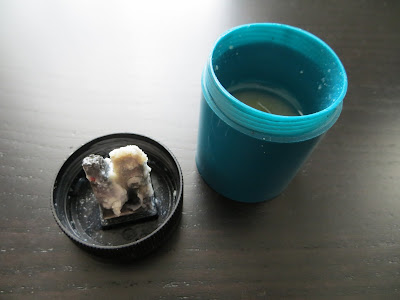 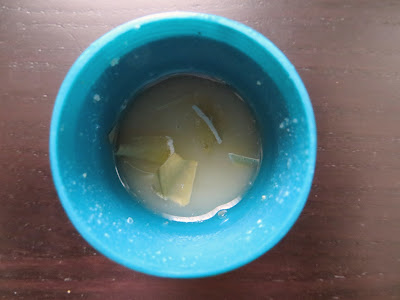 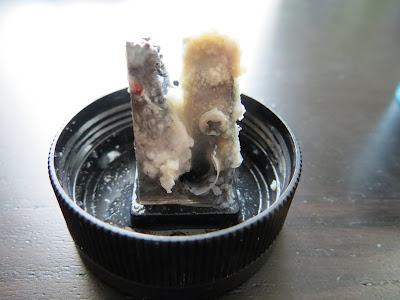 "Hypothesis:  Mixing water and pencil sharpenings makes pulp.
Conclusion:  Mixing water and pencil sharpenings does not make pulp, actually.  It makes mould."
~Will, age 9~
Will is not the only curious one around here.  A few weeks ago, I was putting something on Noah's desk and I suddenly noticed that there was a goopy red film stuck in blotches all over the light bulb of his desk lamp.  The look on Noah's face was one of feigned confusion when I cautiously asked, "Um, Noah, what is this red stuff all over your light?".  But then his conscience (or maybe his knowledge that I'd eventually get the truth out of him, anyway) caused him to quickly confess that he had been trying to melt the wax from a Babybel cheese enough that he could make it stick to his wall.  I was afraid to ask why exactly he wanted to stick Babybel cheese wax on his wall, and decided to just be grateful that the experiment hadn't actually made it to that point.
In both of these situations, the boys were worried that they were going to get in trouble for mucking up stuff by using it in ways it was never intended to be used.  But I honestly couldn't be upset with either one of them, because I knew exactly why they had done it:  inquiring minds need to know.  If they're going to some day stumble upon one of the world's greatest discoveries in all of their creative and thoughtful endeavours, some messes along the way are simply inevitable.  ﻿
﻿
Posted by Lisa at 4:33 PM