This long weekend did not go at all how we had planned it.  Matt and the boys and I were supposed to travel four hours away up to Matt's parents' house to visit with them and most of Matt's brothers and his sister and their families for some fun by the lake. It was a trip we were all looking forward to, as Matt's siblings live spread out across different cities (and countries), and it's rare for so many of them to be in one place at one time. On Friday, though, Will suddenly became very ill; he spiked a high fever, was complaining of a headache and awful dizziness, and was so lethargic he could barely keep his eyes open. He went to bed very early in the evening, and on Saturday morning he was no better.  A trip to the doctor's revealed an ear infection and concern about possible strep throat, and so Matt and I were forced to make the disappointing decision for Will and I to stay at home this weekend while Matt and Noah hit the road.  It was heartbreaking to see Will's teary and forlorn face yesterday morning as he said goodbye to his dad and his brother; it seemed unbearably unfair to him to feel so awful and to have to miss this trip that he had been so excited about.  While I tried to remain positive and reassuring for him, admittedly, I felt like crying, too.

But when life hands you lemons, you make lemonade, right?  Or, in our case, when life hands you a giant zucchini that somehow got away on you in the garden, you cheer yourself up by baking some delicious double chocolate zucchini muffins!  That's exactly what I did today. 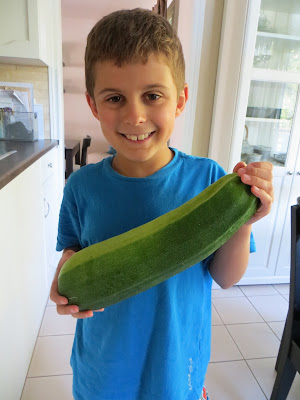 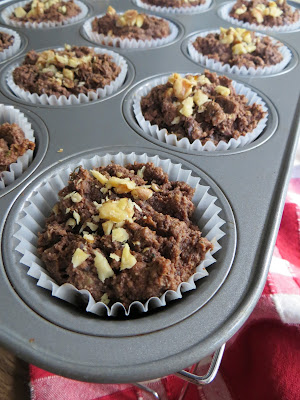 Preheat oven to 350 F.  In a large bowl, combine the almond flour, ground oats, cocoa powder, sea salt, baking soda, and cinnamon.  Whisk together the melted coconut oil and maple syrup in a small bowl, and stir this mixture into the dry ingredients.   Add in the chia seed gel and the grated zucchini and stir until all ingredients are combined.  Fold in the chopped dark chocolate and walnuts.

Line 15 muffin cups with paper liners.  Spoon the muffin batter into the prepared cups, and sprinkle some chopped walnuts on the top of each one.  Bake in preheated oven for approximately 30 minutes, or until a toothpick inserted in the centre of a muffin comes out clean.  Cool and serve. 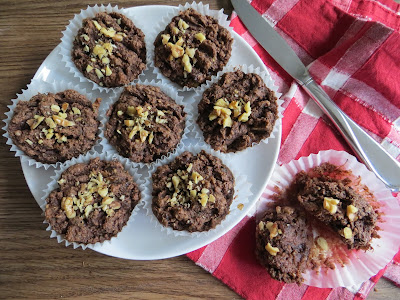 These muffins are moist, chocolatey, and don't include cups full of sugar as I find many baked goods made with zucchini call for.  They make a delicious and nutrient-rich snack.

I am happy to report that Will is feeling much better today.  As if to make up for the few days he didn't eat much at all, he keeps asking to have another of these muffins, to which he has given a hearty two thumbs up.  I'm glad I could do a little something to put a smile on his face! 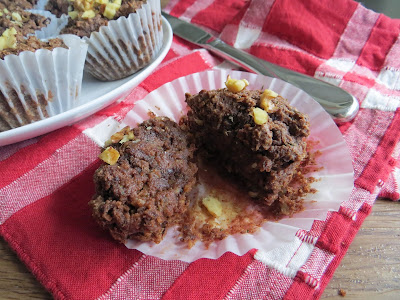