Thanksgiving weekend: The good, the bad, and the ugly

We celebrated a wonderful Thanksgiving yesterday with my aunt Christina, her husband James, and their two fun and adorable girls, who came from an hour and a half away to join us for the holiday.  The eight of us all really enjoyed sharing a big turkey dinner together and catching up on the events of our lives over the last little while, the grown-ups through conversation and the kids through fun and games.  Noah, Will, Madeleine, and Stella continued the long-standing family tradition of the younger generation putting together some "entertainment" for the older one at holiday gatherings; this year was a very animated dance party, where Will, Madeleine, and Stella performed impressive moves in a creatively choreographed sequence in the basement with all of the lights turned off, and Noah, who has now apparently grown too old for such shenanigans, worked behind the scenes to create a wildly spinning strobe light out of a motor, some K'Nex pieces, and a series of multicoloured finger flashlights to add some pizzazz to the performance. There were lots of laughs and a real sense of happiness in those hours we shared, and I truly felt thankful for my lovely extended family and the many meaningful moments we've had together over the years.  That was the really good part of Thanksgiving.

This afternoon, after our company had headed for home, I thought it would be nice if Matt, Noah, Will and I took advantage of the beautiful, sunny fall day we were having by heading out for a walk together on a pretty trail not far from our house.  The boys protested and came up with counter-offers in the way they usually do, declaring walking to be "boring" and suggesting that they bring some more exciting kind of transportation along with them.  (In Noah's words, he had "a need for speed".)  I agreed that they could bring their scooters, so we packed up those and the boys' helmets in the car and drove the short distance to the head of the trail.

Now I am very familiar with this trail, as I walk it almost every week with friends, and I knew that not far from the start of it there was a large hill that would be dangerous for the boys to go down on their scooters.  Because they were so anxious to get moving, I allowed them to go on ahead of Matt and me, but I warned them very seriously that they must not go down the big hill on their scooters, that they should get off and walk them instead for their own safety.  The boys agreed, and off they went.

I enjoyed about thirty seconds of peace, walking beside Matt in the glorious sunshine, and then I heard the kind of screaming that makes the hair stand up on the back of your neck, your stomach feel sick, and your heart start thumping wildly.

It was Will, and as I ran in fear towards the sound down that big hill, I caught a glimpse of my two boys walking slowly back up it, one calmly, with blood oozing out of about five different places on his body, and one crying and yelling hysterically and oozing only slightly less than his big brother.  I heard some jumbled up explanations about how they had walked down most the big hill, but then got on their scooters maybe too soon, about how there had been a jogger coming the other way and Noah had swerved to try to miss him, but lost control and wiped out, and about how Will had then swerved to try to miss Noah and wiped out, too.  Matt and I tried to stop the bleeding as best we could with what we had in the car, but the afternoon walk was lost -- we had to head back home to finish up the first aid and give everyone (my shaking self included) a chance to recover. 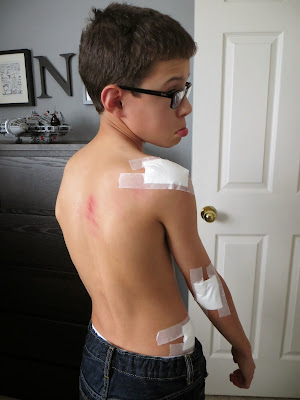 Because it is not quite Hallowe'en, I will spare you the gore and give you the cleaned up version of Noah's injuries.  :(﻿

I think most of us were feeling very badly about this whole situation; Noah and Will because they realized they didn't make a good choice and got injured as a result; me because I felt somehow guilty that maybe I didn't do all I should have done to protect them (and also because I was pretty angry with them at first because they hadn't listened to me).  In the hours since, we have had lots of heartfelt "sorry"s, lots of stories told about how Matt and I had moments as kids where we also didn't use common sense (hello, stitches in my chin and a messed up jaw after riding my bike with no hands!  Sorry Mom!), and lots of serious discussions about how important it is to think to avoid injury, rather than giving into a "need for speed". We've joked a little about the situation as a way of making us all feel better, too.  Noah said he wondered if his horoscope today had mentioned anything about him having an accident, and I said, "Yes:  Your lack of common sense will lead you down a dangerous path."

This is the way life goes, isn't it?  Some days feel like they couldn't be more perfect, while others turn into a bloody mess just to remind us that we are not always in control of what happens.  Time gives us some perspective, though, and I've realized in the past few hours that things could have been much, much worse.  The boys' injuries, while nasty, were limited to surface flesh wounds, and did not involve any emergency visits for broken bones or concussions, chipped teeth, or stitches on this holiday Monday.  Even on days like today, there is much to be thankful for, right?