Something weird is going on around here.

I don't know if it's because there was a full moon recently, or maybe it's because Hallowe'en is just around the corner.  Perhaps it has something to do with the early wake-up call I had from Will one morning this week, who whisper-yelled "MOM!" to jolt me awake, and then told me that he had heard a really weird noise and seen a strange grouping of orange lights in the dark sky outside his window.  (A UFO maybe, and thus, perhaps my children have somehow been taken over by aliens?)  Whatever it is, something has happened to Noah and Will.

It started on Monday evening, when I made the brave (ludicrous, really) decision to make turkey pot pie for dinner.  Now if you've been around here for awhile, you will know that (much to my chagrin) the boys do not eat dishes that involve various food groups all jumbled up together, and that there has been quite a bit of drama at our family's table over similar types of meals served in the past.  But I had leftover turkey from Thanksgiving in the freezer, it was cold and rainy outside, and turkey pot pie seemed just the thing for such an evening, so I braced myself and went ahead and made it, anyway.

Noah was at swim practice that night, and had eaten a different dinner earlier, so I hoped that the fallout might be a little less with only Will around to complain.  I cheerfully served him a wedge of the delicious pie and watched him with baited breath.  The smile of delight and the enthusiastic words of praise that came bubbling forth from him were utterly unexpected.  People, this turkey pot pie had cooked carrots and peas and ONIONS in it and he LOVED it!!!  He loved it so much that the next morning I found this message sprawled across the side of our fridge: 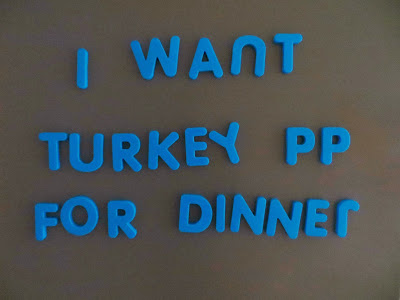 Word of this wonderful pot pie spread to Noah over the next twenty-four hours.  He was quite skeptical about it at first, but Will built it up to such legendary status with his constant praise that Noah felt compelled to have the leftover pie the next night before swim practice.  AND PEOPLE, NOAH LOVED THE TURKEY POT PIE, TOO!!!

As if the gobbling up of turkey pot pie by both boys wasn't strange enough, there was a clothing incident later in the week that left me similarly dumbfounded.  I picked up a hoody for each of the boys while I was out shopping one day, carefully following the firm "no stripes" rule that Noah has insisted on for the past several years.  (The hoody I bought for Will did have stripes, though, because he's more flexible in the clothing department.)  When I showed Noah the two hoodies and told him the plain coloured one was for him, he declared that he didn't really like it, and that he much preferred the one with stripes.  What?!

I should be thrilled about these two very unexpected developments, certainly, but after all these years of hearing boys loudly proclaiming their disdain for things like jumbled up food groups and patterned clothing, I'm finding it hard to believe that there's not something amiss.  If you live in our neighbourhood, you may want to carefully screen your trick-or-treaters next week.  Beware of aliens wearing stripes and demanding turkey pot pie.