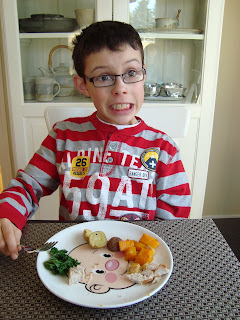 I am about to go out of my mind at mealtimes, thanks to a couple of particularly picky eaters I am responsible for feeding. Other parents of kids who repeatedly turn their noses up at food will understand exactly how frustrating it is to spend an hour preparing a delicious and healthy meal, only to have it received with grimaces, moans, and other Oscar-worthy dramatic performances as soon as it arrives at the table. Family food experts say that children may need to be exposed to a new food 10 to 20 times before they'll accept it. Those experts obviously have never met Noah and Will, who, after 100 to 200 exposures to some foods are still quite certain that they don't like them!

I'm pretty sure I ate almost everything as a kid, so I really don't understand how two little people can have such strong opinions against so many foods. (To be fair, I think there wasn't quite the same extensive variety available in grocery stores when I was younger, but my two guys balk even at some of the most ordinary meals.) Noah painstakingly picks invisible "seeds" out of seedless cucumbers, and complains that the blueberry fruit spread on his toast has blueberries in it. He'll eat orange melon but green melon "isn't good", and he carefully inspects all red pepper slices put before him, pleading for a pardon from eating any he thinks have "pustules" (?!), "white bits", or "wonky ends". Will sits for an hour staring blankly ahead, hoping if he doesn't move, people won't notice him and ask him to actually eat what's on his plate. When that fails, he tries other forms of food trickery, like discreetly dropping bits of food under the table, or partially covering his plate with his napkin to make us think it's empty. (Remember his most ingenious plan for dealing with peas?) I dread nights when I'm serving dishes where food groups are mixed together (such as chili, stir-fries, or shepherd's pie) because while the components of those meals are usually fine on their own, combining them apparently changes them so drastically that, in the boys' minds, they're rendered inedible. Perhaps most shocking and difficult to accept is the fact that I've got two boys with Italian blood in them who actually don't enjoy pasta with homemade tomato sauce!! (Shh -- don't tell my Grandma D.!)

Mealtimes around our family table are plagued with echoes of the "terrible toos" -- they're full of complaints that something is too mushy, too hot, too seedy, too bitter, too stringy, too crunchy, too brown, too bumpy, too strong, too much, or too disgusting to eat. The fact that I'm passionate about healthy cooking and eating makes their closed-mindedness about food especially hard for me to swallow. Throw in the little detail that Will has food sensitivites to eggs, dairy, gluten, and peanuts and you can see how it's a challenge for me not to want to throw in the kitchen towel and feed them nothing but apple slices and toast five times a day!

Unfortunately for the boys, though, it's going to take a lot more than their antics and complaining to derail my efforts to feed them well. I want the boys to recognize (and hopefully, someday, enjoy) many different foods that are good for them, so that when they are responsible for taking care of themselves, they'll do so wisely. While I may have to hear for the umpteenth time that they don't like something, I will continue to offer the boys a wide variety of healthy foods, expecting them to try a little bit of everything, because one time they might be pleasantly surprised. I keep reminding myself that what doesn't kill me in this daily food fiasco will, in the long run, make them stronger. 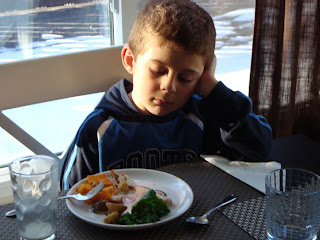 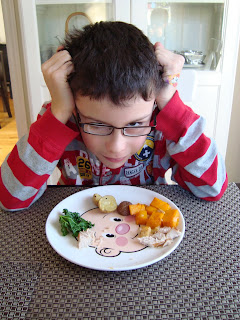 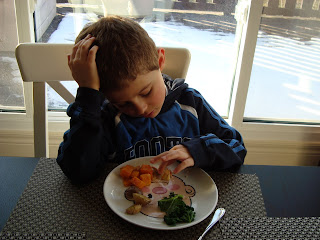 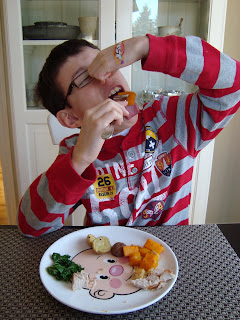