"Boys will be boys" 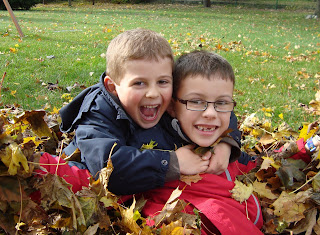 I was recently engaged in an email conversation about birthday party details with the mom of a little girl in Will's class. She and I chatted pleasantly back and forth about pizza, snacks, and cake (something I always do in advance of Will attending a friend's party because of his food sensitivities), and then her last message to me stated this: "...I forgot to mention that [my daughter] tells me that Will is the only boy in her class who is really nice to girls... so cute!" I was really happy to hear this compliment given out of the blue to my sweet boy. It's very important to Matt and I that we raise boys who are kind to others, and I liked that Will's good-hearted ways had made that kind of impression on his classmate. The comment also got me thinking, though, about the messages our society sometimes sends young boys regarding who they should be, and the effects those messages have on them as they grow.

I have been in several situations in recent years where I've observed boys acting in less than kind ways, and someone responsible for them has simply shrugged off the behaviour, saying "Boys will be boys", with an eye roll or a knowing nod. I don't accept that sort of explanation. It may be likely, speaking in very general terms, that boys are more rough and tumble, active, impulsive, and risk-loving than many girls their age. I've heard moms tell hair-raising stories about the near heart attacks induced in them by their "wild" young boys who seem to have no fear whatsoever. But in my mind, a natural inclination for energy and action doesn't give boys a licence to be rude, overly aggressive, or physically rough with the people around them. While I want to nurture the "strong" side of my boys' personalities, so that they grow to be confident young men with the ability to be leaders, I think it's equally important to encourage their sensitive side, teaching them to express their feelings well and to show gentleness and respect to others (girls included!).

When we allow our boys to play so roughly that they hurt someone else, or expect them to be less considerate of others simply because "they're boys", we are giving them an easy way out of accepting responsibility for their actions. I think we can teach boys positive ways to express their boundless energy, through good sportsmanship or other active play, for example. When Noah and Will get an urge to wrestle each other (which happens often and almost always results in injury if we don't catch them at it soon enough), I send them outside with sleds or bikes or a soccer ball and ask them to find nicer ways to be physical and have fun together. We talk frequently in our house about how everyone, no matter what gender, race, religion, shape or size, is a special person who deserves kindess, even if that person is not someone we especially want to be "friends" with. I expect my boys to be aware of the impact their words and actions have on others, even if they are more rambunctious than I was as a young girl. I don't think that's too much to expect from my boys at all.

Yes, boys will be boys -- but as parents we have a great deal of influence over exactly what kind of boys we raise. I think we owe it to our young boys (and our society) to value not only their strength and daring acts of courage, but also their expressions of kindness, understanding, and caring. If my boys grow up to be anything like the many wonderful men I know (especially my dad, my husband, and my brothers), I will be very proud of the part I played in raising them well. 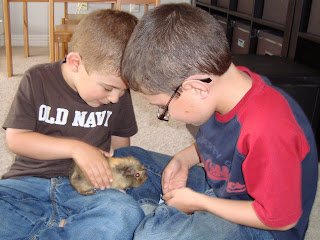