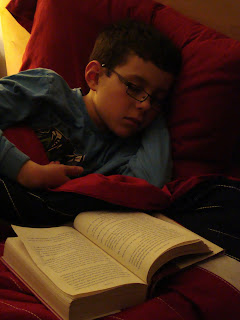 Books have been an important part of our family's evenings for many years now. The well-loved routine of sharing a good story at bedtime has always helped the boys to settle happily to sleep after the busy-ness of their day, and we all enjoy the quiet closeness that reading together allows. Even now, every night before the boys go to bed, Matt and I read a few chapters out loud with each of them, and both Noah and Will also read on their own in their rooms until they get tired and turn out the lights. I smiled a few nights ago when I went upstairs at 10pm (an hour after Noah's usual lights out time) and discovered the scene captured in this photograph. I had just brought home a new stack of books from the library that day and I guess this one was simply too good for Noah to put down!

I have three wonderful books to share in today's edition of A bookworm's breakfast. Maybe one of them will be perfect for some bedtime reading at your house. 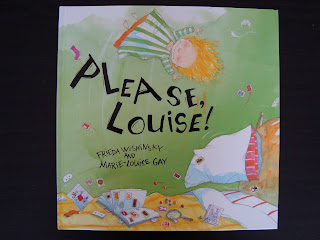 This delightful picture book captures a true-to-life relationship between siblings that will be familiar to many families. Louise is a feisty little sister who is intent on always being around her big brother Jake, while he wants nothing more than to be left alone. When Jake thinks that a desperate wish he's made has come true, he realizes that he actually values his little sister more than he knew. Adoring younger siblings everywhere will relate wholeheartedly to Louise's comical and unrelenting efforts to worm her way into her brother's room and activities, and the book's friendly conclusion celebrates the special bond between brothers and sisters. 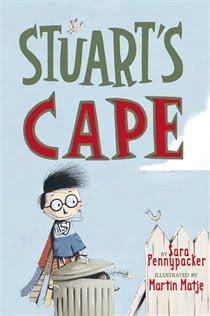 In this shorter chapter book, Sara Pennypacker highlights the wonderful power of children's imaginations through the character of Stuart, a third grade boy whose family has just moved to a new neighbourhood. Feeling bored, and worried about starting the school year in a new place, Stuart entertains himself by fashioning a cape out of a bunch of old ties. The adventures that follow prove Stuart's theory that when you have cape, life is more interesting! Primary level readers will appreciate the silly humour in this book, and will empathize with Stuart's very real longing for friendship. 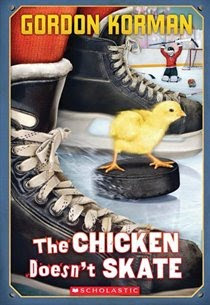 If you like stories told from different points of view, this book about a science fair project gone chaotic is for you. You get chapters written as study notes from Milo, the science geek, Rangers updates from hockey team captain Adam Lurie, files from screenplay writer Zachary Gustafson, and short stories from a kid psychologist.

This is a brief summary of the story: Milo has a problem. He has gotten a baby chicken, and plans to feed it to the judges at the science fair to represent its link in the food chain. But then chaos strikes. The hockey team needs the chicken as a lucky mascot, and the Grade 6 class has adopted it as a pet! Read the book to see if the hockey team wins the championship, and to see how this mess gets sorted out. (Thanks, Noah!)

I hope your young loved ones enjoy some good books and sweet dreams this week! 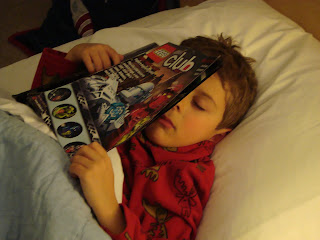