It was an ordinary Thursday afternoon.  Noah and Will and I were sitting around the kitchen table after school, munching on snacks and chatting while going through the day's communications from school and the pile of mail I had just collected from the box.  Will came across a Christmas gift catalogue sent out by a charitable organization (one of the kinds where you can buy gifts of goats or clean water for families in need in underdeveloped countries), and he claimed this as his reading material of choice. 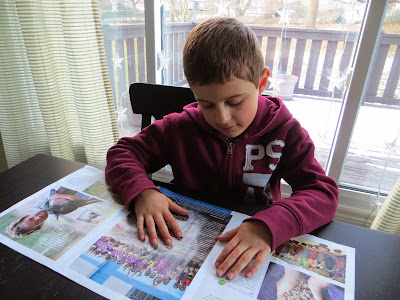 For the next while, Will studied that catalogue very carefully, with the same quiet intensity he demonstrates while poring over the various Wish Books and toy flyers that come in the mailbox this time of year while he's trying to decide what he wants to ask Santa for.  He didn't say much at all about what he had read before disappearing upstairs to put some school things away.  But when he came back downstairs a few moments later, his face was lit up with a warm smile, and he looked at me with his deep, knowing brown eyes and said, "Mom, I think I know what I want to do with my saved money."  (He was referring to the allowance he has been carefully squirrelling away for months to buy something really awesome when he finds it.)  "I want to buy one of those gifts to give to a child who needs it."

His words and the selfless sentiment behind them made me quite emotional.  I listened with a warmed heart while he continued to talk excitedly about his idea, explaining that he had so many great things and was probably going to get many more great things for Christmas, so he didn't think he really needed his money to buy anything else for himself.  He said it would make him happy to make other children happy by giving them something they really needed.  And then he asked me to look at the catalogue with him again to help him choose which gift to give.  The thoughtful conversations that came out of the time we spent reading the catalogue together were deeply meaningful ones for me to share with him.

I think it's difficult for any of us who have never had to go without the necessities of life to truly understand hardship and suffering, but it has always been important to me that my boys' eyes and hearts be open to the many people in our community, in our country, in our world who are less fortunate than we are.  From the time they've been very small, I've talked to Noah and Will in age-appropriate ways about the differences between "wanting" and "needing" things, and I've involved them in thoughtful acts of giving to others, especially at Christmastime when the focus for children is so often on receiving.   The suffering of others around the world has been front of mind for the boys and I in recent weeks, through the research they've done for their FLL project, through the stories Noah and I heard at We Day, and through the various charitable gift catalogues that have arrived in the mail.  The stories of hardship are hard to hear, but it's an empowering feeling for children to see that they can help create change through their acts of love and kindness.

Will has always had a mature interest in social justice, and a deep sensitivity to the feelings of others, so I am not at all surprised by his lovely decision.  Still, I'm so proud of my kind-hearted boy for choosing to use his money for this particular "something really awesome".  His generosity and the wonderful feeling he's experiencing from it reflect everything I want the boys to understand about the true spirit of Christmas.  Somehow I think this is only the beginning of many wonderful things Will will do for the world.