It's cold and a little snowy outside here today, but inside our house it feels warm and cozy.  When the boys burst through the front door after school with cheeks flushed red from the chilly air, they were greeted by the cheerfully twinkling Christmas lights I had put up earlier this week, and the sweet, spicy aroma of the oat, nut, and cinnamon stuffed apples I had baked for them as an after-school snack.

Before this fall, I hadn't thought of baked apples in a really long time; they were one of the (many!) tasty things my dear childhood friend Laurie and I used to create together in her family's kitchen when we were kids looking for something to do.  When Matt and the boys and I went apple picking with my aunt Christina and her family this past September, though, my uncle James reminded me of this simply delicious treat when he mentioned that someone in his family used to make them, too.  It took me a couple of months after apple picking to get around to coming up with my own version of baked apples, but today seemed like a good day to get to it.  Noah and Will were glad I did -- they really enjoyed warming up with this special snack this afternoon. 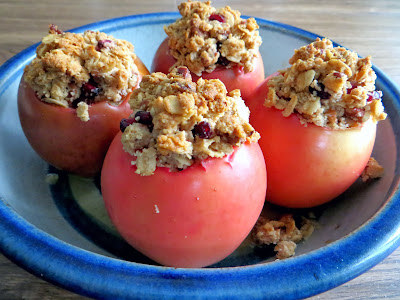 Preheat the oven to 350 F.  In a mixing bowl, combine the oats, almond flour, pecans, and cinnamon.  In a smaller bowl, whisk together the melted coconut oil, maple syrup, and vanilla extract.  Add the wet ingredients to the dry ingredients and stir until the mixture is crumbly and well-combined.  Gently fold in the pomegranate arils.

Using a small sharp knife, cut down into the top of each apple, all around the stem, and remove as much of the core as you can, leaving the bottom of the apple intact.  Once the apples are cored, place them in a small baking dish.  Spoon the oat and almond flour mixture into the centre of each apple, pressing it down to stuff in as much of the filling as possible.

Pour a shallow layer of pure apple juice into the bottom of the baking pan around the stuffed apples, and place the pan in the preheated oven.  Bake the apples for 35 to 45 minutes, or until they are tender and the filling is golden brown.  Cool slightly and serve warm.

Noah really liked the addition of the ruby red pomegranate arils to these baked apples.  (Apples and pomegranates are two of his favourite fruits!)  Baking apples with a mixture of oats, nuts, and cinnamon easily turns them into something special that can brighten up a gray, wintery day.
Posted by Lisa at 4:17 PM