The tradition of baking favourite sweet treats for our family to enjoy over the holidays is one that all four of us cherish, and this weekend I began the process of gathering up recipes and ingredients, mixing things together in bowls, and creating some delicious goodies for our Christmas celebrations.  While I'm often alone in my kitchen during meal prep times, baking is something different:  as the smells of chocolate and cinnamon waft through our home, I'm suddenly surrounded by smiling boys, each of them eagerly offering a hand to stir things, some quick feet to fetch an ingredient from the basement pantry, and of course, some taste buds to make sure that our finished treats turned out just right.

It has become a bit of a fun challenge for me over the past several years to see if I can take old holiday baking recipes (ones I used to follow before we discovered our family's food sensitivities and changed the way we eat), and find a way to recreate them without gluten, dairy, or eggs, and with less sugar, yet still have them taste as good as the originals.  I've had many successes in the past, and this year, I decided to tackle one of my very favourite old recipes:  triple layer bars.  With some help from Angela Liddon of Oh She Glows, who shared a way to make homemade dairy-free sweetened condensed milk (from coconut milk), and with some other modifications I made to the original ingredients (like using an almond flour crust instead of a graham cracker one, coconut oil instead of butter, and cashew butter instead of peanut butter) our family is able to once again enjoy the scrumptious combination of a crumb crust, a chewy coconut layer, and a topping of melted chocolate and nut butter.  Mmmmmm! 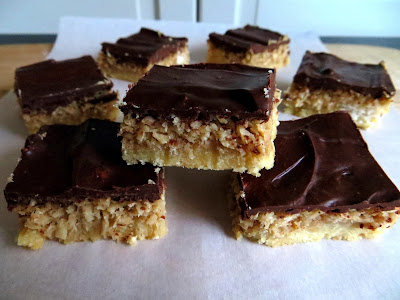 To make your own dairy-free sweetened condensed milk, pour a can of coconut milk into a medium-sized saucepan over medium heat.  Whisk in the coconut sugar (Angela's version used 2/3 of a cup, but I tried using only 1/2 a cup and it worked perfectly), and bring the mixture to a low simmer.  Be sure to keep an eye on the pot, as the mixture could boil over very easily.  Reduce heat to low-medium and simmer the mixture for 15 to 20 minutes, whisking occasionally, until it thickens slightly.  Remove the mixture from the heat and let it cool while you're preparing the crust.

Preheat the oven to 350 F.  Line a 9x13 inch baking pan with two pieces of parchment paper, one going over the other in a perpendicular fashion, leaving some overhang all the way around.  In a mixing bowl, combine the almond flour and sea salt.  Whisk together the melted coconut oil, maple syrup, and vanilla in a smaller bowl, and then add the wet ingredients to the dry ingredients.  Stir until well-combined and crumbly.  Press the almond flour mixture into the prepared baking pan, being sure to push down firmly so your crust will hold together well once it's baked.

Sprinkle the shredded coconut in an even layer over top of the almond flour crust.  Carefully pour the sweetened condensed milk over top of the whole coconut layer, and use a fork if necessary to help spread it out uniformly, pressing the coconut and milk mixture down onto the crust.  Place in the preheated oven and bake for 25 minutes.

During the last 5 minutes of baking time, melt the chopped dark chocolate and cashew butter together in a small saucepan over low heat, stirring occasionally.  As soon as you remove the baking pan from the oven, pour the melted chocolate mixture over the hot coconut layer and spread it out evenly with a spatula.  Let cool for about 30 minutes, and then place the pan in the freezer for a few hours to allow the baked goods to firm up.

Once they're firm, remove the baked goods from the pan by simply lifting up the parchment paper edges.  Place the whole thing on a cutting board and slice into squares with a large, sharp knife.  Let the squares thaw a little longer, then serve and enjoy (or freeze the squares to save them for a later date).

While my version of triple layer bars is quite different from the original in ingredients, as well as a fair bit less sweet, the end result is every bit as decadent and delicious as the squares I used to bake years ago.  We're looking forward to sharing these yummy treats with family and friends over the holidays.  Maybe your loved ones will enjoy them, too!