A number of years ago I purchased a little wooden house with twenty-five numbered doors in it, as a fun way for the boys to count down the days until Christmas.  On the eve of December every winter, I fill the little compartments with special surprises (small squares of dark chocolate, coins, tiny toys or gadgets, and tickets for special activities or treats), and Noah and Will open one door each day until Christmas arrives.  This is a tradition that the boys and I still very much enjoy, even as they are growing older.  They still find it exciting to peek behind a door each morning and see what little treasure is waiting there for them. 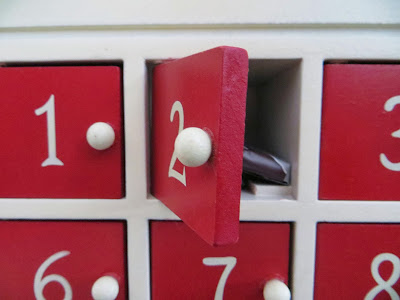 This morning, Will and I were sitting at the breakfast table (Noah and Matt had already left to travel to Ottawa this weekend for a swim meet), and Will realized with a bit of regret that Noah was going to miss out on the opening of the little doors for the next few days.  I thought it was sweet that he was thinking of his brother, and I smiled kindly and told him that we would leave Noah's surprises there behind each door, so he could open them all when he returned.  This suggestion seemed satisfying to Will, and he returned to eating his toast quietly and studying the Future Shop flyer with intense focus.

A moment later, he looked up at me and suddenly blurted out, "I paid attention to which days we've been getting which surprises, and how many days there are before there's a repeat of something.  According to my calculations, we should be getting another one of those awesome coupons on December 20th."  And then he beamed at me with a proud grin.

I am going to have to work harder next year to keep Will guessing, I suppose.  Good thing I have twelve months to try and figure out a complex enough formula to baffle him.