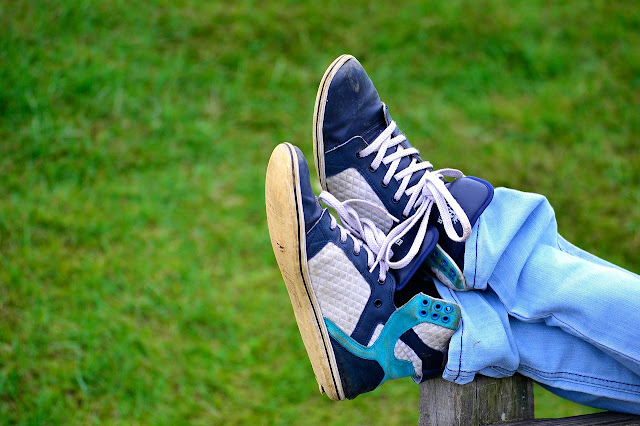 We had it good for awhile around here in the clothing department.  Noah spent about three years wearing pretty much the same size, and his feet followed a very predictable pattern of moving up one shoe size a year.  I grew used to only needing to buy a few refresher items for him each time the seasons changed, because whenever he tried on his clothes from the same season the previous year, they would still fit. Considering Noah's strong aversion to clothes shopping and how particular his opinions are about what he will and will not wear, this was a very convenient situation for me, indeed.

Those days are definitely over now.

Apparently, the year of being twelve is the year of The Incredible Growing Boy.  In the span of about nine months, Noah has jumped up two sizes in everything:  jeans, shirts, shoes. We went shopping for an entire new fall wardrobe in September last year because over the summer he had finally grown out of all of his older warm clothes, and then last week I took a look at him and realized that his wrists and ankles were suddenly sticking out of those newer clothes, too! He also informed me the other day that his gym shoes, purchased new at the start of the school year, have reached the end of their useful life because they are now crushing his toes.  I keep staring at him and wondering how it's even possible for him to have sprouted so much in such a short period of time.  It's like being in a sci-fi movie where the twelve year old boys swiftly grow super-length arms and legs and feet while they sleep (and then take over the world....)

The March Break now involves a quest to completely re-outfit my oldest son, for the second time this school year.  Thankfully, in addition to outgrowing all of his clothes, Noah seems to have left behind his strong aversion to clothes shopping, and the two of us have been having fun browsing stores together while we chat about interesting things and share some laughs (even if he still has very particular opinions about what he will and will not wear).  In a way, I'm kind of glad he needs an all new wardrobe yet again.  It gives me a chance to enjoy some one-on-one time with him before he outgrows wanting to be seen with his mom at the mall.  I try not to think about how those days are probably not too far off, either....