"There won't be any mushy stuff this Mother's Day," Will warned me on Sunday morning as he arrived downstairs with a sheet of pretty handmade paper clutched in his hands.  "This is supposed to be funny, okay?"

At ten years old, he is suddenly so over sentimentality, or at least he makes a point of loudly protesting it at every possible opportunity.  Terms of endearment are embarrassing, he says regularly with disdain, and kisses are full of disgusting germs.  On Sunday he held the poem he'd written for me at school in front of him and sort of sang the words to me as he had been instructed to do by his teacher; there was a crafty grin on his face, and he cast tentative glances my way every now and then to make sure I wasn't going to get weepy on him or anything.  He is true to his word, that boy: his ode to me was definitely more pragmatic than mushy, speaking of onions and cold hands and room cleaning. 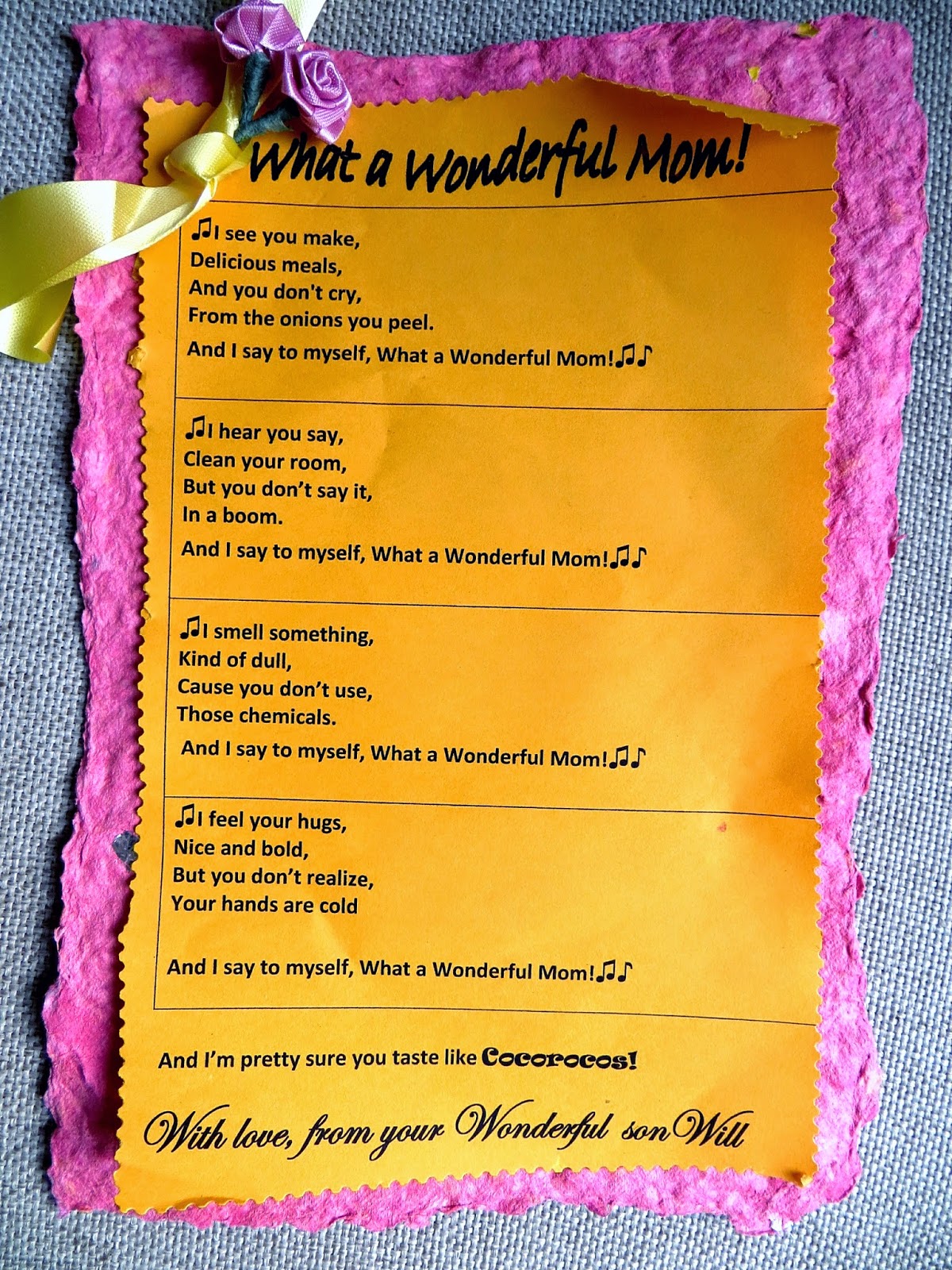 I guess, coming from a very literal ten year old boy with a sense of humour, these are compliments?

But, this same boy who has sworn off of mushy stuff was thinking sweetly of me and how he could make my Mother's Day special all last week, Matt told me afterwards.  On Wednesday, Will informed him that he wanted to get me flowers right then as a surprise, and he would keep the flowers hidden in his closet until Sunday.  Matt gently suggested that perhaps the flowers might be happier if he bought them closer to Mother's Day and gave them to me right away, and so on Friday evening, while I was out for dinner and a theatre production with some friends, the two of them walked over to the plaza near our house, and Will thoughtfully and decisively chose a bouquet of tulips, which he knows are one of my favourites.  He struggled a bit over what to write on the card, Matt said, because, of course, it couldn't be mushy, but I didn't need any sentimental words to tell me what was in Will's heart.  The surprise bouquet of cheerful flowers waiting for me on the kitchen table when I arrived home to a sleeping house on Friday night said everything I could have wanted to hear.

I've reached the end of Mother's Day mornings where affectionate, tousle-headed little boys come tumbling excitedly into my bedroom in the early hours to share heartfelt expressions of their love for me. Will, like his brother did several years ago, has gradually crossed over into that mysterious world that exists somewhere between boy and man, and is trying on a gruffer suit for size, one that he thinks is more serious and makes him look less "babyish", as he calls it, in others' eyes.  But no matter how vehemently he opposes outward shows of affection now, his inner self still radiates kindness and love.  That, I think, will always be who he is.

When I saw Will's pleased grin after I thanked him warmly for the flowers on Saturday morning, it took everything in me not to scoop him up and kiss him.  I didn't want to discourage any future thoughtful gestures by scaring him off with germs.  Still, I hope that in these important defining years ahead, somehow I can help him to know that his sensitive nature is a very important part of what will one day make him a wonderful man.