Last year, Will was chosen by the student head of the tech crew to join the small school team, which is responsible for setting up and running all of the equipment needed for assemblies and special events. This older boy took Will under his wing, teaching him the ins and outs of operating the sound board, and being part of that crew was one of the highlights of Will's school year. He loved going into the school early on mornings when he was needed for set ups, and the privelege of sitting at the tech crew table during assemblies to manage all of the gear that brought them to life. (In the spirit of tradition, he even got to carve his name into the table, which bears the names of all of the crew members who worked the board before him.)

This fall, Will was given the responsibility of choosing the tech crew's two newest members. The older boy is graduating at the end of this school year and is grooming Will to take charge when he leaves. It would have been typical in this kind of situation, I think, for an eleven year old to simply choose two of his good friends for the job and call it a day. But that is not at all what Will did. He asked the teachers of the two grade 6 classes if he could speak to each group of his peers for a few minutes about the opportunity, and his talk produced forty-two interested volunteers. A quick-thinking Will devised a two-stage hiring protocol on the spot. He asked everyone to submit a resume outlining their qualifications and their motivations for working on the crew, and he told them that he would invite the best candidates to do a trial run at the sound board, after which he would make his decisions.

Will pored over those resumes at home in the evenings that followed, and talked to me about the qualities he was looking for in a tech crew member: some tech experience and an eagerness to learn, dedication and a sense of responsibility. Although he worried about his friends being angry with him if he didn't choose them, he remained faithful to offering the students whom he believed best earned it the chance to come and try out the sound board. He sent the successful candidates an official email congratulating them all, and he'll have to make the final cuts soon after the second round of his process. I have no doubt he'll make excellent choices.

A couple of weeks ago, I received a phone call from Will's school principal in the middle of the morning. My heart rate skyrocketed for an instant, until I heard the principal say he was calling to ask my permission for Will to be the student spokesperson for their school fundraiser. The school council really wanted to drum up enthusiasm about the upcoming dance-a-thon, and they felt Will was the perfect person to help them do that. I gladly agreed, knowing that Will would love this particular role and would give it his all, too.

Over the following weekend, Will emailed and phone called back and forth with parent members of the council planning a fundraising kick-off assembly for Monday, one that needed to be put together on very short notice due to circumstances at the school. He selected music, agreed to do the tech set up, planned a speech, and organized a flash-mob without even having the benefit of being at school to do so. I heard from several parents on the council afterwards about what a fantastic job Will did. He's currrently spending time at home in the evenings writing enthusiastic announcements promoting the dance-a-thon, which he presents over the school PA system each morning.

It's not just his own world of school and dance-a-thons and tech crews that inspires Will, though; he also took a keen interest in politics and the federal election over these past few months. I answered many questions from him about candidates and issues, and listened to him protest intelligently about two things he perceives as injustices: that children aren't allowed to vote, and that his school doesn't have a student council that he can run for.  As I watch Will push off jauntily on his scooter down our driveway each morning, confidence and heart and a strong sense of fairness radiating from his still-small body, I think often that it wouldn't surprise me at all to see his name on a ballot one day.... 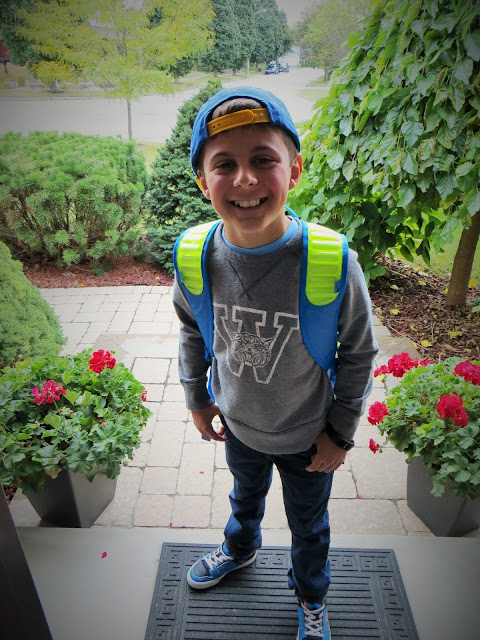