It was a very autumn-y sort of weekend around our house.  Matt and the boys and I went and visited a local orchard this afternoon, where we walked among the rows of fruit-laden trees and had fun filling four large bags with shiny red apples together. 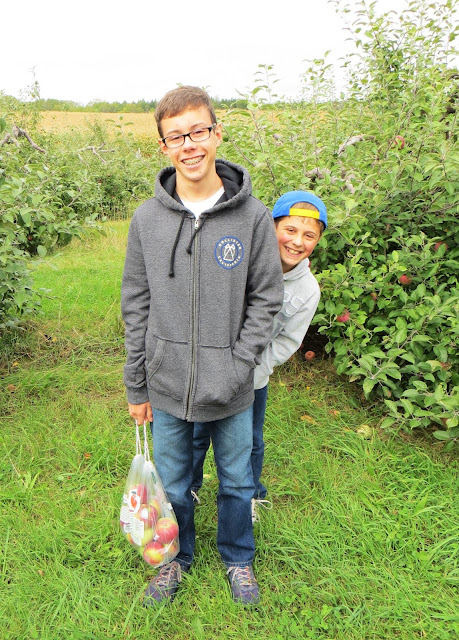 These two kooky kids are always the apples of my eye.

The rest of the weekend was pretty blustery and damp outside, so it was a great opportunity to spend time in the kitchen cooking up foods for fall feasting: some homemade granola, a batch of oatmeal cookies for school lunches, beef pot roast for dinner, and a pumpkin spice cake with maple icing for dessert. This cake has quickly become a new seasonal favourite in our house; it's a just-right combination of savoury and sweet that goes perfectly with a warm mug of apple cinnamon tea. 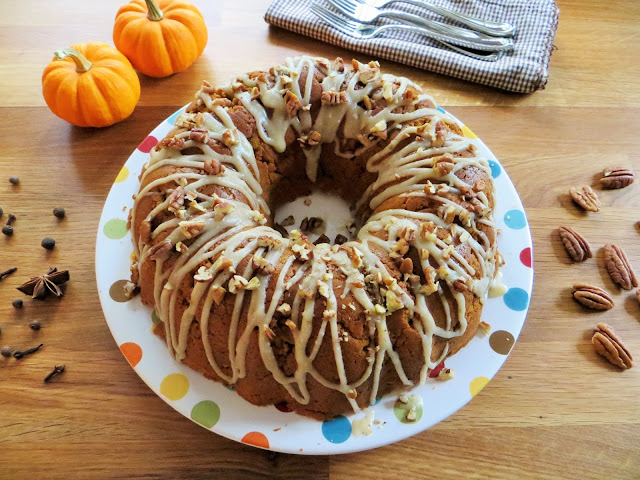 Lightly grease a bundt pan with grapeseed oil, then spoon the cake batter into the pan. Smooth the batter with the back of a spoon to create a level top. Bake the cake in the preheated oven for 55 minutes to an hour, or until a cake tester inserted in the cake comes out clean.

Beat the coconut butter, coconut oil, and maple syrup in a bowl with an electric mixer on high speed until a smooth mixture forms. Spoon this mixture into a piping bag fitted with a small round tip. Pipe the icing in loops over the top of the cake, and garnish with toasted chopped pecans.

When Will came in from outside yesterday afternoon and smelled this pumpkin spice cake baking, he exclaimed, "Oh my gosh, I could just float away! It smells like heaven in here!" We all agreed after dinner that it tasted every bit as delicious as it smelled. Maybe you'd like to bake up one of these tasty cakes yourself for a fun fall celebration this month.