I'm settling back into regular life this morning after spending much of last week away with Noah and his robotics team. We left last Tuesday morning, travelling over thirteen hours on a bus headed to St. Louis, Missouri, where the FIRST Robotics World Championships were being held. The four days that followed were an exciting and exhausting whirlwind of robots; there were more than 600 teams from around the world competing in the high energy event, and many thousands of people packed the stadium stands all day, each day to watch, cheer and marvel at the feats of engineering and the impressive performances of the machines and their teen builders and drivers, who had been guided throughout the season by helpful mentors. At the end of the competition on Saturday, our very tired team crawled back onto the bus and travelled another thirteen-plus hours through the night to arrive back home yesterday morning. As worn out as they were, I'm sure many of the kids spent yesterday wishing that their robotics season wasn't over yet. (I spent yesterday half comatose, trying to keep my eyes open and remember who and where I was!)

I had no idea before this year how exactly an FRC team works, and I'm so glad I had an opportunity to learn and be a part of one as a parent this past season. Helping to plan the trip to Worlds and being able to travel with the team gave me an up-close look at the truly inspiring enthusiasm, dedication, and skill of these robotics kids and the people who support them. We were up before 5am each morning during the competition, as the kids were determined to get to the stadium early and camp out in front of the doors in the hopes of securing the best seats for scouting once they opened at 7am. The team spent a minimum of twelve hours each day at the stadium, playing in matches against other robots on the field, taking scouting notes as they observed other teams' machines at work, troubleshooting, cheering, and building connections with robotics kids from around the world. After a late team dinner each evening, the kids often met again until 11pm to discuss strategy and to share funny stories from their day. The passion I saw in the students at Worlds reflected the commitment of the team throughout the build and competition season; they live and breathe for their robot and for their ability to accomplish something meaningful and amazing together.

Noah's team had a very successful performance at Worlds. By Friday's end, they had finished the qualifications round ranked second out of 74 teams in their division, which was thrilling for all of us. They made it through the division quarter finals on Saturday, and then were edged out of the competition during the semis, when one of the other robots in their alliance broke down during a nail-biting tiebreaker match. We were all so proud of our kids and what they were able to achieve with the machine they built with their own brains and hands.

On a personal note, it was really nice to be able to travel with my oldest son on this trip, to catch a better glimpse of this world of robots he loves so much, to share in his excitement, to provide support for the hard work he and his team do by helping to feed them during the week. I appreciated the moments Noah spent enthusiastically explaining something to me about the various robots, or telling me how he was enjoying his experience. (I also really liked arriving home yesterday morning to a clean house, a batch of delicious made-from-scratch pancakes, and a vase of cheerful flowers, all courtesy of Matt and Will. It felt wonderful, in our worn-out state, to have such a loving support team waiting for us at home.)

I'm still feeling tired this morning, but like Noah and his teammates, that isn't stopping me from already looking forward to the next robotics season. I can't wait to see what these amazing kids will build next. 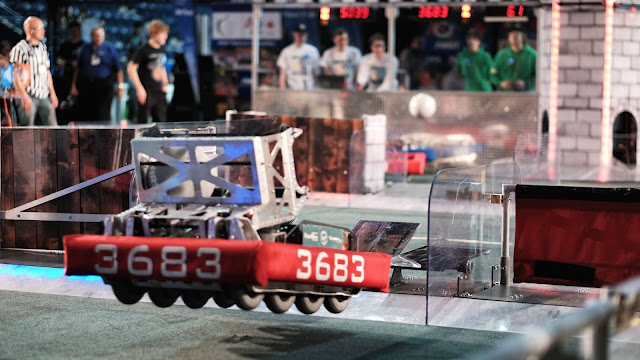