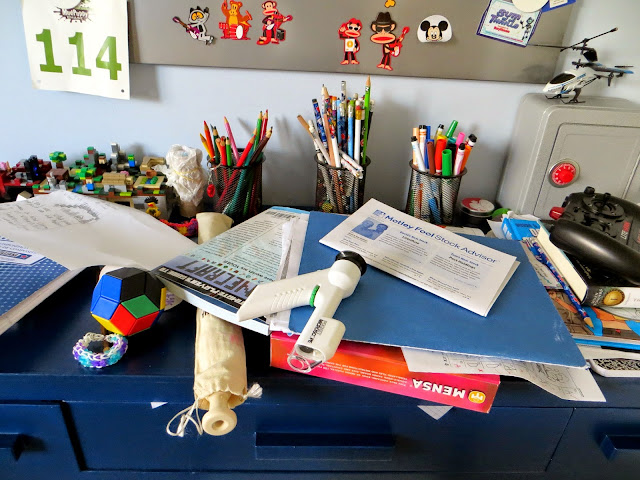 Earlier this year, Will started playing a stock market game as a math enrichment activity for school and at home. It seemed a logical next step for the boy who had started studying baseball and hockey stats and trading cards as soon as he could read on his own, and who, at age nine, would pore eagerly over passed on Motley Fool Stock Advisor newsletters whenever his uncle was finished with them. We set up an account for him on the same stock simulator one of the local universities uses with its business students, and Will has been completely enthralled with the game ever since.

He's very, very good at it, too. He watches the stocks carefully, asks Matt questions about short selling and the difference between call and put options, reads investing tips from experts, and makes wise buying and selling choices. I don't know whether it's his highly developed ability to notice details and patterns, the advice he's absorbed from reading all those old newsletters, a stroke of good luck, or a combination of all of these that makes him so successful, but he's currently ranked eighteenth in the game, out of more than a thousand players of all ages from all around the world.

One morning last week, Noah sent Will an urgent text from the high school hallways asking for some quick advice before the bell rang for first class. Some of the older students on the robotics team had coincidentally signed up for a stock market game a couple of days earlier, as an opportunity for some friendly competition amongst team members, and Noah was joining in. Will thought for only a few seconds, then frantically typed in his stock buying suggestions before he had to leave for school himself. Noah followed his advice to the letter and catapulted into first place amongst the robotics team players by the end of that day.

Every school morning that followed included a similar exchange of texts between the two brothers; Noah would ask Will what he should buy that day, and Will would confidently type back his responses. One morning, though, Will decided it would just be easier to give his brother advice over the phone instead of typing everything, so he called him at school. Noah was in the hallway with some of the robotics team members at the time, and he had to put Will on speaker phone to convince them that it was actually his little brother he was getting tips from. His friends were certain he had a "fifty-two year old stock advisor cousin" who was helping him win. Will and I heard them all burst into incredulous laughter when they realized it really was a twelve-year old boy who was guiding Noah's stock choices (and I had to explain to a somewhat miffed Will that they weren't laughing at him, they were laughing in amazement over him.)

The hour after school every day has been filled with highly animated stock portfolio chatter between the two boys; I can barely get a word in. They are thrilled that there is a P.D. day this Friday, so they can spend their time together plotting the best strategy to make sure Noah will be in the winning position when the robotics team leaves for World Championships in St. Louis next Tuesday morning, the previously decided upon end point of the group's stock market game. There will be no complaints of "I'm bored!" around here on Friday, I'm sure of it.

I think Will's successes when playing such a difficult numbers game are pretty remarkable. But what makes me most proud is watching him and his brother get so much enjoyment out of spending time together, bonding over shared interests and a mutual respect for each other's strengths. This loving investment in a relationship will certainly bring each of them the very best returns throughout their lives.