A (VHS) Window to the Past 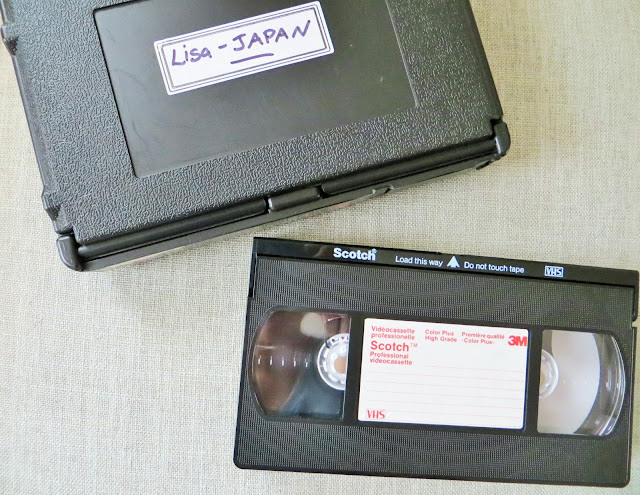 The summer I was fourteen, I travelled to Asia for a couple of weeks with my dance teammates as part of a cultural exchange program between Canada and Japan. We visited several different cities while we were there, staying in youth hostels and the homes of welcoming Japanese families, meeting local dancers in each location for social activities and to perform together in joint showcases, so that we would all have a chance to learn from one another and develop new friendships. It was a once-in-a-lifetime opportunity for a young, dedicated dancer like I was, and I still remember vividly many of my experiences during that trip.

While sorting through storage boxes in our garage last summer, I came across an old VHS tape with a recording of some of the Japan trip events, including dance performances, backstage footage, and the highlights of a few social gatherings. I didn't do anything with the tape just then, but I filed its existence away in a near part of my brain, to be easily accessed when the time felt right to remember it. This past Saturday, after spending an enjoyable afternoon watching Will perform in one of his dance competitions for this season, I felt a strong desire to get out that old video tape and watch it. I'm not sure what I wanted to find in it, other than maybe an opportunity to show my son what dancing was like when I was young like him, and maybe some pleasing proof that we were actually as good at performing as my nostalgia-laden memories had suggested we were back then.

Watching that video opened up a deep well of emotions in me, some of which are difficult to even put into words. (The least of these was utter disbelief that the nearly thirty-year-old VHS tape actually worked, and I was able to watch the entire thing!) I found it unsettling in a way, and powerfully touching, to really see my fourteen-year-old self in something other than a photograph, to watch my body language, to hear my own younger voice, and to suddenly remember with such clarity just what it felt like to be that tender age.

The footage showed scenes of shared laughter and comfortable friendships amongst our large group of girls and one boy, friendships created through so many hours of our lives spent learning and working hard together in the dance studio over the years. There were moments where we offered each other encouragement as we rehearsed in an unfamiliar place, weary from heat and jetlag, and there were glimpses of us girls helping each other backstage, pinning an umpteenth bobby pin to secure each other's French braids while our restless feet tapped out rhythms on the tile floor, the older girls helping the younger ones with stage makeup. It surprised me to realize how many of the steps I somehow still knew as the songs for each of my own routines played and I watched our group perform in perfect unison, and how strongly I could still feel the exhilaration of our well-executed leaps and turns, as if I was actually doing them again myself at that very moment. I was pleased, too, to realize that we really were as good at dancing as I had pictured in my carefully guarded memories.

But the video recording opened up another, less rosy set of recollections and feelings, too. I looked at my tiny, fourteen-year-old frame on the screen and remembered that there were moments then when I actually believed I was fat and needed to lose weight to be a better dancer. I felt once again the pressure of competition between individual classmates, and the sting of hurtful whispers and insensitive giggles amongst teenage girls who could be someone's most exuberant supporters one minute and her harshest critics the next. For me, at least, those awkward early adolescent years at the dance studio were full of insecurities and shifting friendships as I tried to figure out who I was and with what values I wanted to align myself, while still seeking acceptance from others.

Re-living a small part of this pivotal time in my life made me keenly mindful of my two boys, who are now very close to the age I was in the video. It made me hope for just a moment that their early teenage years might be a little kinder, a little gentler for them than I remember mine being. At the same time, I recognized that it was finding my own way through the challenges, disappointments, and hurts of that time, with the always present love of my family, that were likely the most powerful building blocks of my true character, and allowed me to grow into the adult version of myself that I am and appreciate today.

In the end, the lingering feeling I'm left with after watching that old video is one of gratitude for the experiences of that trip and that particular time in my life, both the wonderful and the difficult moments, and all that I gained from them. I wouldn't want to be fourteen again, but I'm thinking fondly this week of the many unique dancers with whom I shared time, space, and valuable learning opportunities back then, as we were each growing into our own person. I sincerely hope that wherever all of these women and one man are now, they're well and living lives that make each of their hearts dance joyfully.