The (little) men of the house 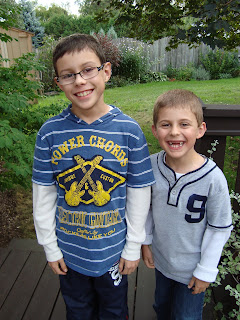 Matt was out of town for work for a few days and nights this week. I'm not complaining, because work travel isn't something Matt has to do very often, but any parent who has spent some time flying solo knows exactly what I mean when I say I wasn't really looking forward to it. We get used to our regular routines, to having someone else there to help with the many responsibilities involved in day-to-day life with kids (not to mention, adult company!), and sometimes it's just downright tiring doing it all on your own (especially when you've still not been feeling quite like yourself lately, either). Once Matt was gone, though, I quickly came to realize how much my boys are growing up, and how very thoughtful and sweet they can be when they think about what's going on around them.

In my experience, it's not common for seven- and ten-year-old kids to be eager to help out around the house. Requests of that nature are usually met with scowls or groaning (from Noah, who views mundane tasks as a nuisance that take him away from far more interesting endeavours) and screams of indignation (from Will, who thinks being asked to do a boring job is a grave injustice that must be railed against with great passion). The past two evenings, though, a different scene was played out in our home. Noah came to me after school one day and, of his own accord, asked me if I would like him to help make dinner for everyone. He was a willing runner for things I needed from the basement, dried all of the dishes cheerfully, and when I had to run out after dinner to pick up our veggie box for the week (something Matt usually does on the way home from work), Noah decided to stay behind on his own in his room, where he diligently finished a lengthy homework assignment.

Will was equally pleasant and cooperative. When I asked him to please set the table (which is usually Noah's job, but Noah was at a Lego team meeting after school), he smiled and said, "Sure! I want to be extra helpful tonight," and even filled the water glasses without me asking. When I poured him a bowl of cereal at 6:15 am the first morning (his ritual before-breakfast "crunchy munchy snack" which he usually has with Matt while I'm getting ready upstairs), he looked at it for a moment, then very sweetly said, "Mom, just for future reference, this is a little bit too much cereal." (Now this may not seem like such a big deal, but if you've witnessed Will's usual reactions to perceived disruptions to his perfectly ordered way of doing things, i.e. putting the exact same amount of the exact same four cereals in a certain order in his bowl every morning or else!, you'd be impressed with his calm, polite tone!) Will even agreed to talk about something other than hockey at the dinner table.... for five minutes, anyway!

It dawned on me this time around that Matt being away from home has gradually become easier than it once was, that the little boys who once needed so much from me are now happy to be the little men of the house, taking on extra responsibilities to help out the whole family when there are fewer to share the load. Sure, I still prefer when Matt is home, but I've come to realize that in the company of my two other wonderful fellas, I suddenly don't feel so on-my-own when he's not.
Posted by Lisa at 2:03 PM