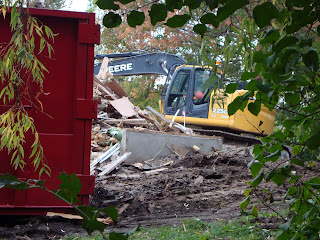 They're tearing down the old house on the property behind us this week. It's been a long, cumbersome process, involving heavy duty vehicles and equipment, lots of crunching, smashing and banging, and today, all that remains of the quaint brick house is a sad pile of rubble.

I sympathize with that old house. In the past year, it lost its quiet, long-dwelling family who once treated it with care, and briefly suffered the insanity of noisy, rude tenants who damaged it and treated it disrespectfully. When the tenants moved out, the house was left to stand empty and alone in the cool fall weather, with no heat to warm its bones, no light to brighten its dark interior, and no people to fill its days with laughter and love. The breaking down of its walls and foundation this week was symbolic of the house's recent state of weakness after years of standing strong and proud on its little hill.

In recent months, my life has felt very much like that of the poor old house. Where I once was full of positive energy, strength, and happiness, I've lately felt tired and anxious and sad. I've been spending too much time inside my own head, which has been dark and cold like the abandoned building behind us, and I've been having a hard time letting warmth, light, and laughter back in, despite the kindness and loving care of those dear to me. The physical and emotional after-effects of an illness I had at the beginning of the summer have taken their toll on me, a person who worries far more than is healthy, and I feel like I've temporarily been reduced to a shadow of my former self.

Some of you may remember that I had dental surgery back in May. The surgery was fine, but I was prescribed a course of the antibiotic clindamycin to prevent possible infection afterwards, and as a result of that drug, I developed a c. difficile infection. Aside from suffering with the very unpleasant symptoms of that illness, I was extremely anxious about it, a fact that was only exacerbated by the frequent and sensationalist news stories circulating at the same time regarding c. difficile outbreaks and deaths in various hospitals around the province. I was terrified to treat the infection with more antibiotics as was recommended by my family doctor (because I've personally had too many awful experiences with them wreaking havoc in my body), but I was terrified not to because of what might happen if I didn't. Thankfully, with the reassurance and care of my naturopathic doctor, I was able to get rid of the infection using high doses of probiotics and some other supplements instead (a fact which I think speaks volumes about how effective naturopathic medicine can be).

My worrying, however, did not end when I got the all-clear test results. My digestive system was still not functioning at its best, and I couldn't stop myself from worrying obsessively about what if the infection came back, a possibility that was unlikely due to the fact that I had built up a good supply of probiotics in my system to replace the depleted ones that had allowed for the infection in the first place. I developed a stomach ulcer, and then worried while I waited for the results of h. pylori testing, which ended up coming back negative. In the meantime, I started to feel exhausted all the time and developed muscle aches in my lower back and neck and shoulders, and then worried more that there was something else wrong with me. Several doctor's appointments and tests later, I have begun to realize that it has likely been my constant anxiety that has made me such a wreck. The body can only handle so much stress at once, and constant worry over a period of a few months has completely worn mine out.

I have come to understand that I need to stop the vicious cycle of worry that is contributing to my physical illness, and that I have the power within me to do something about it. I am continuing to work with my wonderful naturopathic doctor on my digestive system and my anxiety, both of which are slowly improving, and I've recently started seeing an osteopath to help with the physical aches and pains. I'm looking into yoga classes, and attended my first group meditation session at a studio last night, a new experience for me which I found very interesting and relaxing. I am slowly digging myself out of my dark pile of rubble and heading towards warmth and light again. I am choosing to believe that I will get there.

They've been tearing down the old house behind us this week to make room for a new one. It will take time, but eventually the scars left behind by the old house will be smoothed over, and a new house will stand strong and proud, ready with an open heart to welcome a family within its walls. The old house will eventually become a distant memory for those who were part of its history. Healing takes time, too, but I feel now that I'm on the road to smoothing over my own scars. One day soon, I hope, I will stand strong and happy again on my own little hill of wellness, the events of the past few months a distant memory that contributed to building a better me.
Posted by Lisa at 2:08 PM