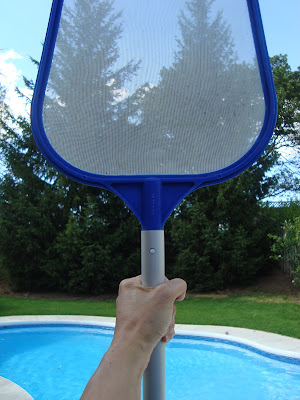 This week has been feeling mostly quiet and mellow so far.  The boys have been content to spend lots of time reading or just hanging out in the yard, and they often seem to be far away in thought.  I think part of this quietness comes from having had a very full and excellent summer, so no one feels the need to pack in anything else in this last week of holidays.  The other part might be because while they're not saying much about it, I think both boys are probably wondering a lot about the upcoming school year: who their teachers will be, who will be in their classes, what their new grades will be like in terms of experiences and expectations.  But just to prevent us all from falling too much into a pensive lull around here in these last free days, we had an "incident" this morning.  My heart still gets to racing every time I think about it.

Noah and Will and I all stepped outside on the deck this morning to play a game of Blokus at our patio table.  I happened to glance out at the pool in passing, and I noticed something dark floating on the surface of the water.  Large, dark-coloured maple leaves are a common finding in the pool, but I somehow knew when I saw this "thing" that it was not a leaf.  I cautiously walked closer to the pool's edge and my uneasy feeling turned to horror when I realized that it was a little mole, whose unplanned trip into the water had ended very badly.  The boys heard me gasp before I could stop myself, and when I saw them both turn their eyes on the mole and then stare sadly at its little body as they realized its fate, I knew that this was not something that I could ignore until there was someone else around who could deal with it.  No, this incident fell into the very urgent category of Something Must Be Done Immediately.

Now, Matt and I share virtually all of the responsibilities involved in raising children and keeping a home; in most ways we do not subscribe to traditional roles for women and men.  It goes unsaid, though, that each of us has become solely responsible for a few specific tasks over the years, because it's just better that way.  Dealing with poor little dead critters is one of the things that falls under Matt's jurisdiction.  I felt sorry for that wee little mole floating in the pool, but I have to say, in that moment when I realized that I had to step WAAAAYYYY outside of my comfort zone to dispose of its body (because Matt was gone to work for the day), I think I may have felt sorrier for myself.  I took a deep breath and mustered up all of my courage and headed to the garage to equip myself for the terrifying task at hand.

Thankfully the net that we have for scooping leaves and dirt out of the pool has a very long handle, so I picked that pole up at its far end and walked cautiously over to the pool's edge, where I was able to scoop the little mole up with the net and yet still be a good several feet away from it.  Knowing that there were two pairs of eyes watching my every move, I resisted the overwhelming urge I had to scream or cry or both, and walked briskly and purposefully up the hill at the back of our yard, which borders onto an empty property which is currently all torn up and under construction.  When I got to the top, I prayed that my horrible throwing skills would be sufficient for what needed to be done, and then I launched that poor little mole into a soft bed of long grass on the other side of the fence.  (I know, that sounds terrible, but I really didn't know what else I should (or would be physically able to) do with it, and I figured at least he might become food for one of the local birds of prey or one of the cats who roams the neighbourhood.  Circle of Life, and all.)  With a sick feeling in my stomach, I marched back down the hill, washed the net and put it away, and went to join the boys on the deck, where we all said how sorry we were for the poor little mole, and then quietly began our game.  I was glad that I had been able to remove that mole so that the boys wouldn't have to look at its sad little body any longer, but boy, sometimes it is really hard to be the parent.

Will came into our room in the middle of the night recently, telling Matt and I that he had had a nightmare in which 10,000 cats were in his room and they wouldn't leave.  Based on the way that little mole has been floating around in my brain all afternoon, I wouldn't be surprised if 10,000 of them showed up in my dreams tonight.  I hope they'll forgive me for launching their brother's body over the back fence....
Posted by Lisa at 4:16 PM