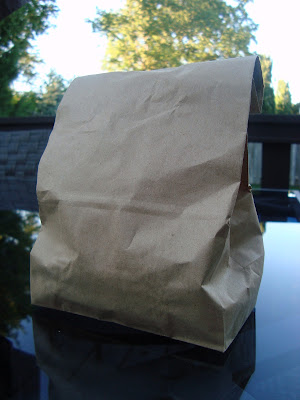 When I was a kid around Noah's age, I would sometimes get to ride my bike to the corner store near my house in the summer.  I went with a little pile of loose change jingling cheerfully in my pocket, and a sense of anticipation that made me pedal as quickly as I could.  Once I arrived at the store, I would stand deep in thought before the rows of brightly coloured penny candy, trying to decide which tiny treats to choose and how many of each one to buy.  It was always very satisfying to emerge from the store with a little folded-down brown paper bag of carefully selected loot, and to head home where I could savour the sweet goodies throughout the afternoon.

I was reminded of this childhood experience the other day when Noah asked me if he could take apart his old bike so he could have some springs to use for an invention he had been working on in his brain.  I told him his bike would probably be a great source for invention parts, but that it might be better to look at a hardware store and pick out the specific items he was looking for, because the springs in his bike didn't sound like the kind of springs he needed.  I think a lightbulb went off in Noah's head when I mentioned that a hardware store would have a "parts" section;  he grinned from ear to ear and had a far-away look in his eyes.  I imagine in his mind, he was standing before boxes and bins of various thing-a-ma-jigs much like a kid in a candy store, thinking carefully about which ones would be most satisfying to carry out in a little brown paper bag and then enjoy for the rest of the afternoon.

I love how the long, carefree days of summer give the boys so much time for thinking and dreaming, for questioning and creating.  Over the past several weeks I have had countless fascinating conversations with both Noah and Will, and have often paused to wonder and smile for a moment after stumbling upon some project one of them has been working on in the house or yard.  I've seen Will quietly lying on his bed after an action-filled afternoon outside, punching digits into his calculator with a serious face and carefully studying the various patterns that emerge when using different number combinations.  I've discovered a diorama of sorts in his bookshelf, where he re-created a scene of Olympic athletes jumping hurdles using Lego figures and Geronimo Stilton novels. 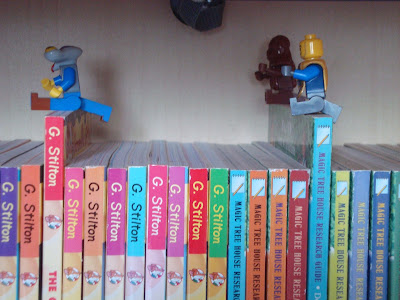 The other day I found an ingenious "trap" Will had set on the wooden play structure in the yard by strategically using a lacrosse stick, a kooshie ball, and three ring frisbees. 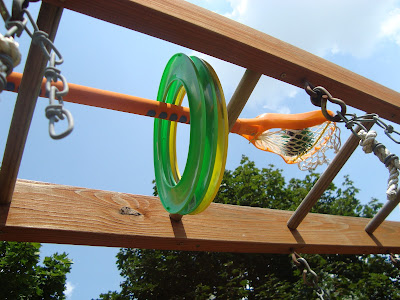 (I was afraid to ask him whom or what he was intending to "trap", but I did get him to explain how the trap works:  the wind created from the motion of swinging causes the frisbees to rotate, which in turn rotates the handle of the lacrosse stick, which then dumps the kooshie ball on the unsuspecting swinger's head.  Pretty clever!)

I've sat, completely enthralled, on the edge of Noah's bed at night listening to him try to explain to me how his brain thinks of ideas so quickly and in such complex ways sometimes that he can't quite articulate them fast enough verbally or on paper, and how he's trying to invent a technology that could read brain signals and project them instantly onto a screen so he and others could see these amazing ideas as they formed, before they were lost somewhere. And just this past Friday, I shook my head in disbelief as I watched both boys (who waited "in agony" for a week and a half for our new pool to be filled and ready for swimming) spend only ten minutes in the water the afternoon we first jumped in, and then another thirty minutes on the pool deck figuring out 1001 unique uses for their various water toys. 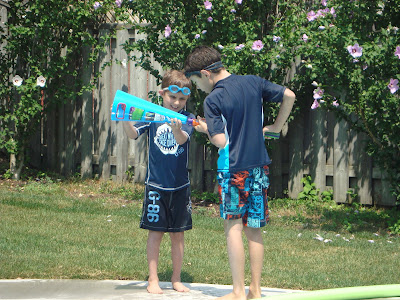 I love that I'm able to be a part of the boys' wonderful summer lives, when they have hours of free time to delve into the bottomless little brown paper bags that are their minds and continually find something new and exciting.  Their discoveries are sweeter to me than all the little penny candies in the world.