The world outside our window was covered in a fresh blanket of heavy snow again this morning, and I could hear the oats calling me from the kitchen cupboard as I made my way downstairs.  I often start my winter days with a steaming bowl of oatmeal topped with apples, cinnamon, nuts, and a splash of almond milk, but this morning I thought I would add a little excitement to the routine by trying something slightly different.  After seeing a beautiful looking dish of baked oatmeal on Pinterest, I was inspired to create my own version using some of my favourite flavour combinations.  What emerged from my oven in very little time was really pretty to look at, and more importantly, it was also scrumptious and satisfying to eat.

Baked Oatmeal with Apples, Cinnamon, and Pomegranate
(inspired by this recipe from Deliciously Ella) 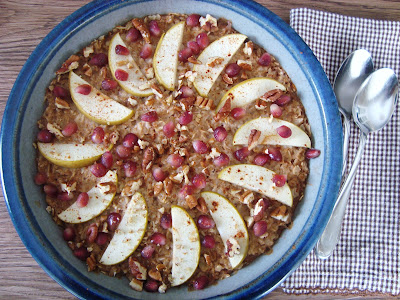 ﻿
1 cup certified pure gluten-free rolled oats
boiling water
1 apple (I used a Granny Smith), peeled, cored, and thinly sliced
1/4 cup pomegranate arils
1/4 cup unsweetened almond milk
1/4 cup chopped pecans
1/2 tsp cinnamon
1 tsp pure maple syrup
*plus an additional half an apple (cored and thinly sliced), some pomegranate arils, chopped pecans, and cinnamon, for sprinkling on top of the oatmeal
Preheat your oven to 375 F.  Place the gluten-free oats in a bowl and cover them with boiling water.  Let them stand for approximately ten minutes, or until the oats have absorbed the water.
Meanwhile, place the peeled, thinly sliced apples in a layer that covers the bottom of a small pie plate or other baking dish.  Sprinkle the apple slices with a bit of cinnamon, and then scatter the pomegranate arils on top. 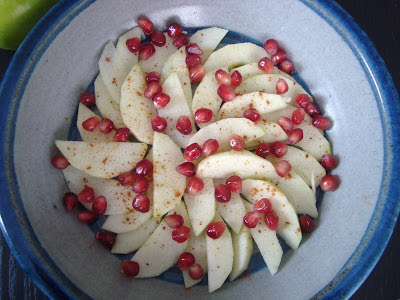 Add the almond milk, pecans, cinnamon, and maple syrup to the soaked oats and stir to combine all ingredients.  (I usually don't sweeten my oatmeal with anything other than fruit, so 1 tsp of maple syrup was enough for my tastes, but if you prefer a sweeter oatmeal, you could add more syrup.)
Pour the oatmeal mixture over top of the apples and pomegranate arils in your baking dish and spread it out evenly.  Top the oatmeal with more thin apple slices, pomegranate arils, chopped pecans, and cinnamon, and then bake for 20 minutes, or until the top is lightly browned.
This delicious and healthy baked oatmeal is very easy to put together and makes a wonderful warm and filling breakfast on a winter day.  It can even be made ahead of time and then reheated in the oven in the morning to help keep things quick and simple. 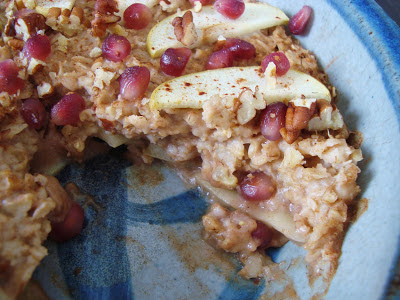 Now that our family has tried and loved this version of baked oatmeal, I can't wait to experiment with other fruit and nut combinations.  Next up:  a banana split version with bananas, strawberries, walnuts, and a sprinkling of coconut and finely chopped dark chocolate.  Mmmmmm.  I don't think I'll mind now if winter sticks around a little longer!
﻿