I think the universe has sensed that February needs a bit of excitement to liven things up around here, because this has been one bizarre week.

The wacky:  After months of seeming to have moved past his tendency to leave many of his personal belongings behind, Noah, within the span of eight days, lost close to $90 worth of swim gear.  He left a brand new pair of Speedo jammers in the locker room at the regional meet in Brantford (which is an hour away), and didn't even realize it until the next day.  We were angry, he was upset and very apologetic and agreed to buy a replacement with his own money, and then a week later, he forgot his swim fins in his regular locker room after practice, and when Matt drove with him across town an hour later to go and pick them up, they were already gone.

After a few phone calls, emails, and several tense hours of disappointment and frustration at home, the swim fins thankfully turned up.  One of the swim coaches had saved the day (and Noah a lot of money!) by picking up the fins when he saw them; he had put them in a safe place so he could return them to Noah at the next practice.  We were all relieved that it was only the Speedo that we had to accept as a goner.

Fast forward a few days, and picture a determined Matt who happened to be somewhere near Brantford for work a week and half after the swim meet.  On a desperate hope, he stopped into the swim complex and inquired if they had a "Lost and Found"; he was then directed to a huge collection of random stuff that he could have easily become lost in himself.  When he mentioned that his son had forgotten something at Regionals, the staff member said, "OH, we have a whole OTHER Lost and Found for that weekend", and headed off to locate the whereabouts of four whole garbage bags of stuff that had been left behind in the pool area over a two-and-a-half day span. (FOUR WHOLE GARBAGE BAGS, PEOPLE!!)  Matt spent what must have been a rather unpleasant period of time sorting through goggles and water bottles and other random gear, his hopes rising every time he pulled a pair of black jammers out of the bag, and then finally, lo and behold, his hand rested on a pair that boldly displayed the name "Noah" in black Sharpie on the tag.  (Picture fireworks and trumpets here, because I'm sure that's how Matt felt when that Speedo emerged.)  I'm not sure what is more unbelievable in this story:  the fact that Matt actually managed to retrieve Noah's suit, or the fact that there were FOUR WHOLE GARBAGE BAGS of valuable stuff left behind at a weekend swim meet.  It's a small consolation, but at least we know now that our kid isn't the only one....

The wild:  I was backing out of the driveway a couple of mornings ago, lost in thought on my way to run some boring old errands, when this suddenly caught my attention: 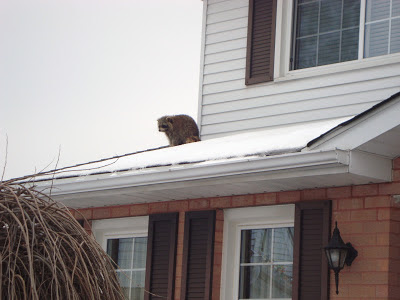 Yes, that is a raccoon on our roof.  I slammed on the brakes and sat there in the middle of the road in a true "What the....?!"  kind of moment, and then decided I had to pull back into the driveway, because how could I just drive away when there was a raccoon sitting on our roof?!  I ran into the house to grab the camera, pleading with the little critter telepathically to please not leave right away because I had to have a photo to show the boys, but I needn't have worried, because the critter didn't go anywhere for awhile.  He just sat there and looked at me. I have no idea where he came from or why he chose our house to sit on -- we've never seen raccoons around the neighbourhood before -- but if his arrival is supposed to be a sign of something, I don't think I want to know what it is.

The weird:  Will emerged from the school doors one day this week wearing his winter coat, his warm hat, and these (which were a prize he had chosen from his teacher's treasure box for something good he had done): 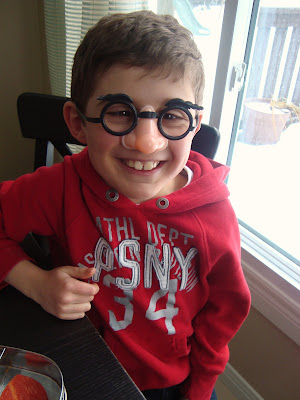 I don't think I need to say anything else about this, except that I love this kid's kind of weirdness.

Happy weekend, everyone.  May it be filled with just enough of the wacky, wild, and/or weird to keep things interesting!