Room Redo: For the Tweenaged Boy

For me, long winter months with many days spent mostly indoors inevitably leads to a desire to redecorate somewhere in our house.   I don't think Matt is ever quite as enthusiastic about this mid-winter transformation as I am, but being the good-natured husband that he is, he always humours me and plays along. This January it was Noah's turn to benefit from my boredom-busting project.  Because he was in need of a larger dresser and some more book storage, anyway, I decided we would give his room a makeover to better reflect the personality of the interesting tweenaged boy he has become.  Noah's walls were already painted a nice neutral shade of gray, so I figured we'd be able to just make some simple changes and transform his room without too much time or effort.

It's funny how one home improvement project always leads to others, though.  I had the "brilliant" idea of taking the two bookshelves from our living room to use for Noah, and to buy a larger single new unit for the books in the living room, so we'd only have to acquire and assemble one new shelf instead of two.  Well, that move resulted in needing to sort through all of the children's story books that the boys have now outgrown (which had me sitting on the living room floor with a lump in my throat as I packed the familiar and well-loved volumes away in boxes, all the while remembering the feeling of sweet little heads resting on my shoulders while we read words that I still know by heart).  It also meant that I had to repaint the section of the living room wall that was behind the bookshelves, and that I am still, more than two weeks later, dealing with books piled all over our living room floor because the replacement bookshelf we wanted sold out the day Matt drove all the way to IKEA to get it!

There was chaos everywhere the weekend most of this redecorating project took place:  Matt was assembling furniture in the upstairs hallway, I had picture frames spread out all over the floor trying to come up with appealing arrangements, Noah was sorting through years of "treasures" of the kind young boys like to accumulate. 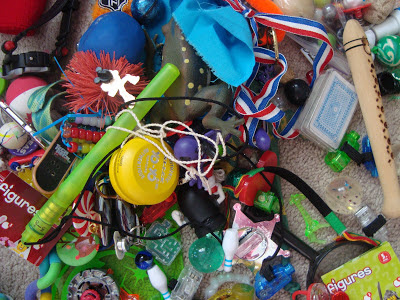 The whole thing ended up being more work and more of a time commitment than my impatient self had originally estimated, but I am really happy with the end result, and more importantly, so is Noah. 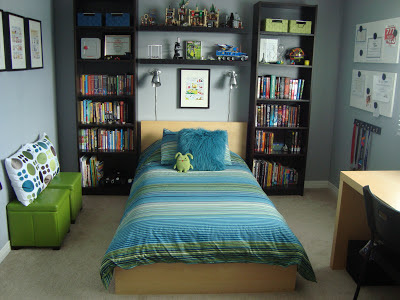 We flanked Noah's bed with two large bookshelves since he spends so much time reading in his room.  This area is now affectionately referred to as Noah's "cave".﻿ 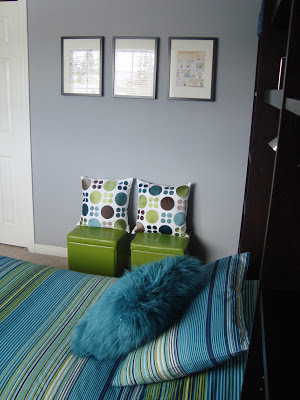 I added some colourful storage cubes and throw cushions to provide extra seating for friends (or for a certain younger brother on the rare occasion that he's invited to hang out in Noah's room).﻿ 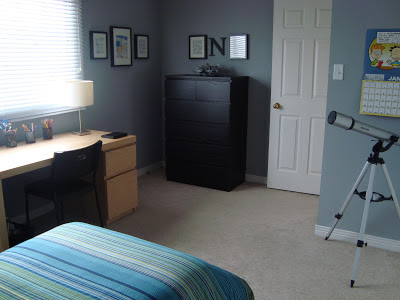 A larger dresser now holds the clothes that were threatening to burst out of the old one, and Noah's original desk was moved in front of the window to give him an inspiring view of the sky while he works.﻿ 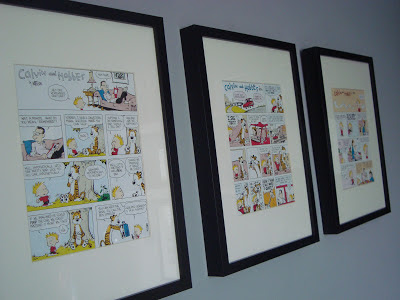 Noah loves comics, so I created some inexpensive art displays using pages out of Calvin and Hobbes and Big Nate books, and some IKEA frames.  It felt wrong to cut pages out of books, but I used Noah's well-loved, dog-eared copies for that purpose, and bought him new copies of the two books to put back on his shelves.
This room received a hearty show of approval from the tweenaged boy who occupies it, and I've got the redecorating bug out of my system for now. I'm really glad I took the time to document Noah's new room in its freshly redecorated state, because I can assure you that it will never, ever be that tidy again! ﻿ 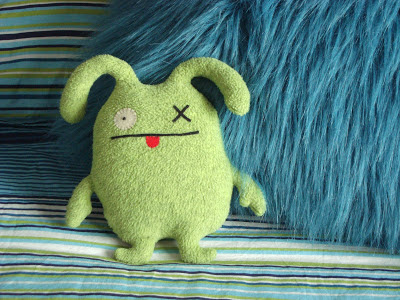