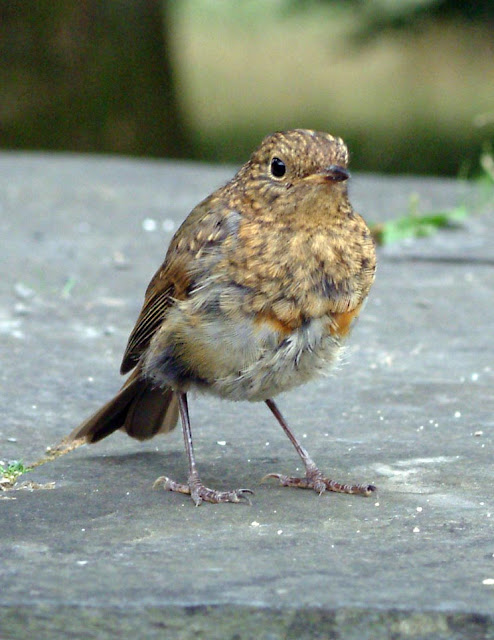 Photo credit:  commons.wikimedia.org
﻿
One day early last week I heard a different sort of bird call than the ones I'm used to hearing in our yard, so I went out on the back deck to investigate.  I discovered on the lawn a young robin (not the fuzzy little baby kind, but the kind that is on his way to making it on his own in the world -- he was almost full-sized, with real feathers, but a white spotted belly and a bit of fluff here and there that revealed his tender age), and he was accompanied by a mature robin who appeared to be his mum.

I stood and smiled in fascination for awhile at the simple beauty of the scene.  As the robin mum hopped here and there across our yard, looking for food, the little robin hopped curiously a short distance behind her, his head cocked to one side as if he were taking things in from a new perspective.  Sometimes he would take an opportunity to hop a ways off on his own in a different direction from his mum, pecking the ground to see what interesting things he might find there; other times he ran squawking up close behind her, and his mum would pop whatever appealing morsel she had found in the grass into his gaping beak.

Every day since that first spotting, I've been listening and watching for that little robin and his mum, and every day, to my delight, they've appeared multiple times to perform together this same sweet dance of life.  While I've experienced the pleasure of seeing birds build nests and care for eggs in our yard several times since we've moved to this house and yard, I don't remember ever watching a bird family at this later stage of development before, and it seems fitting and symbolic when I realize that this is the same dance my own little family is now performing.  Noah and Will amaze me all the time with the things they're learning and accomplishing on their own these days, and it's a marvel to me to see the strong personal identities and confidences that are emerging in each of them.  (Sometimes, too, the boys still squawk at me because there remain some situations where they do need their mum!)

A few days ago, I heard the now-familiar shrill chirping of the little robin coming from the front of the house, along with a flutter of activity and some scraping sounds against the brick.  I slowly opened the front door to find the little robin attempting some unsuccessful landings on our house light fixture, and then on our window ledge. His awkwardness caused him to tumble roughly into the garden, where he then stood for awhile in a daze. I was worried for him at that point, wondering what he was going to do next and if he needed any help, but seconds later my concern vanished as I saw his mum suddenly appear on our walkway. She stayed back, but called out a few notes of encouragement, and the little robin managed to pick himself up and fly off into a nearby tree. Seeing his success made me want to both cheer and cry.

I have always been moved by the sweet scenes of animal life in our yard, but this bird family has struck a particularly poignant chord in my heart because I feel in some ways that I'm looking in a mirror when I watch these common yet significant moments of their lives. I wonder if that robin mum feels even a smidgen of the same immense pride I do when I see my boys accomplish something truly wonderful on their own. I wonder if she realizes how quickly time is passing, and if her little bird heart will both soar and ache when she one day watches her baby bravely spread his wings and head off into the great wide world without her.
Posted by Lisa at 1:40 PM