From eggs to fledglings 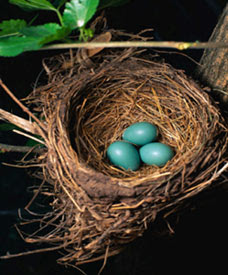 I had a lovely little bit of dental surgery this past Wednesday that has resulted in a ridiculously swollen and bruised face and the need for pain medication, plus an inability to go anywhere without people staring at me. I'll blame those facts for having deluded myself into thinking that everyone is as fascinated by the recent bird adventures happening in my yard as I am. Whether you think I'm crazy or not, I've decided to update you all on the latest news concerning our little robin friend!

After a full day of flinging himself mercilessly against the windows of our house, the robin turned his attention elsewhere: to "the other robin" he suddenly noticed in the shiny black finish of our neighbour's car. For the entire weekend, the feisty little fellow followed an unrelenting pattern of throwing himself at one side of the car, then hopping underneath the car to see where his "opponent" had gone, then throwing himself at the other side of the car. As much as I hated to watch him doing this, I couldn't help but check out the window every now and then to see if he was still at it. He always was.

The motivation behind the robin's exhausting behaviour became clear to me on Monday morning as the boys and I were leaving for school. There in the weeping mulberry tree right in front of our living room window (and very near to our front door) were the beginnings of a nest. For the rest of Monday, I watched our robin's mate flying tirelessly to and from the tree with bits of plant material and chunks of mud, and marvelled at how she managed to build such a sturdy and cozy nest in no time at all, using her little body to pack everything down and make a nice smooth bed for her soon-to-be-laid eggs. When I last checked (from a ladder a safe distance away), there were two perfect, delicate, china blue eggs nestled safely in this new home, and this weekend the mama robin is always sitting on them or keeping a watchful eye on them while she eats worms nearby.

I am completely delighted that the robins have chosen our tree as a temporary home for their little family. The boys and I have an unobstructed and unobtrusive view of the nest from our living room window, so it's a wonderful opportunity for them to observe a fascinating bit of nature. More significantly, though, I feel a strange connection to that mama bird, and a sense that in building her nest so close to our home, she somehow trusts that we are a safe haven where little ones are protected and cared for with love. When I watched her building a home for her family and see now her dedication to keeping her eggs safe and warm, it makes me want to hug my own two boys, who are not babies anymore at all, and who have already shown in some ways that they're testing their wings.

In the days immediately following my surgery, I was unable to walk to the school to pick the boys up as I usually do, so I asked Noah to meet Will at his door and walk home with him. I know he's old enough to do this, and I trusted him completely, but I still felt a little anxious as I waited, watching the street carefully just after 3pm for the two of them to appear. The sight that greeted me as they turned the corner made my heart swell: a carefree Will was waltzing cheerfully along in his t-shirt and jeans, swinging an umbrella in his hand, and there was Noah, walking stoically wearing his fully-loaded backpack on his back and Will's on his front, and carrying both of their jackets. When I greeted them, I thanked Noah warmly for walking his brother home safely and asked him why he was carrying everything. He told me that he felt they should get home as quickly as possible so I wouldn't worry about them, and he thought the best way to do that was to carry Will's heavy bag for him. I was so proud of him.

My boys have a lot to learn still before they're ready to fly on their own (and thank goodness, because I'm nowhere near ready to let them go yet). But at times like these, I realize how bravely and beautifully they're making their way down the path that will take them to that day. I will watch our little robin family with a happy heart as the eggs hatch and the tiny babies grow into fledglings in the coming weeks... and I'm sure I'll cry the day those little robins fly away.


Robin's egg photo courtesy of the Maryland Department of Natural Resources.
Posted by Lisa at 12:46 PM