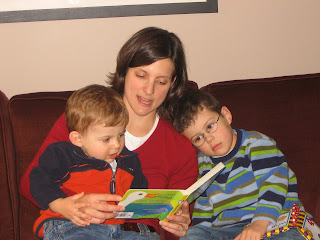 I have recently accomplished what I think is an interesting and impressive feat: I can now say I have read every word of the Harry Potter series... aloud! Noah decided last year that those were the books he wanted us to share together before bed every night (even though he's already read the series several times on his own) and I happily agreed, because I was very interested in reading them too. For over a year, the two of us have been intrigued, amazed, horrified, saddened, and thrilled as we've turned the books' pages each evening; we've held our breath and cheered and marvelled together at the incredible world, events, and characters created by J.K. Rowling. I love that even at the age of nine, Noah still truly enjoys having me read with and to him (because I so love it too!)

In my mind, reading aloud with your children is one of the best gifts you can give them. Sharing books provides young ones with rich language experiences, with opportunities to explore new ideas and use their imaginations, with a perfect moment for a snuggle or a laugh or a meaningful conversation with Mom or Dad. What a great way to show your children you care about them! Today in A bookworm's breakfast, I'm featuring some fantastic books that I've really enjoyed sharing aloud with my two boys.

3-5 year olds: There Is a Bird On Your Head! by Mo Willems 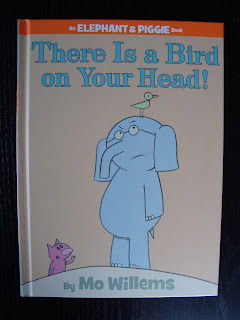 Gerald the Elephant is careful and worries about things, while his best friend Piggie is cheerful and at ease; when they're together these chums have highly entertaining adventures. In this book, Gerald is distressed to learn that there are birds building a nest on his head, and it is up to Piggie to come up with a solution to this incredible situation. The story is told entirely through the simple yet hilarious dialogue between the characters, and Willems' expressive illustrations wonderfully communicate action and feeling. Young readers are sure to fall in love with Gerald and Piggie, and will want to read about their other escapades too, in books such as I Will Surprise My Friend and I Love My New Toy!. 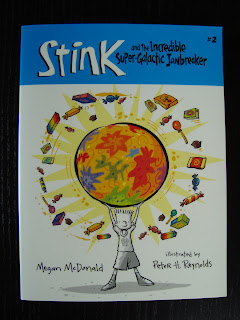 It's hard to imagine any 6 to 8 year old boy not being drawn to a character named "Stink"! When Stink Moody writes a letter to a candy company expressing his disappointment in their jawbreakers that don't actually break jaws, he's thrilled to receive a box of 21,280 jawbreakers in the mail for free! Thinking he's onto something, Stink gets caught up in a frenzy of sending and receiving mail. When he misses paying attention to one very important envelope, though, Stink comes to a valuable realization about what truly matters to him. McDonald writes a very appealing chapter book series with the Stink books. Many 6 to 8 year olds will certainly relate to Stink's relationships with his friends and with his older, moody sister, and will enjoy the entertaining incidents involving glow-in-the-dark pyjamas, fascinating pets, smelly sneakers and more.

9-12 year olds: The City of Ember by Jeanne DuPrau 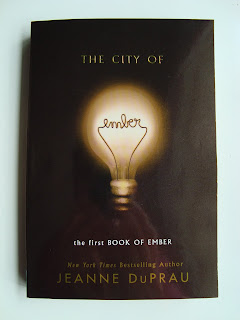 (This week's 9-12 year old book recommendation was once again written by Noah, who recently chose to spend weeks' worth of his saved allowance money on the four books in this series, so he could read them over and over again. I love it!)

In an underground world filled with darkness, there is a light: The City of Ember. The city has been there for 242 years and the electricity system is starting to wear out. If the lights go out forever, the citizens will be doomed. Doon Harrow, who wants to see the generator, thinks he can solve the problem, but when he gets a look at it, he realizes he is unable to do anything. He and Lina Mayfleet, a messenger girl, must find a way to escape the City of Ember before it's too late, but without instructions and with a trouble-making mayor, it could be hard. This book had me completely hooked as soon as I read the first sentence. The determination in both characters was amazing. The situation was completely dire, and imagining myself in that place as I read the book was terrifying. In this quest for light and survival, Lina and Doon had to gather all the hope they could find to escape Ember and it encouraged me that they believed that there was a way out. (Thanks, Noah.)

No matter what books you choose to share with your children this week, I'm sure they will treasure the time you spend reading with them.
Posted by Lisa at 12:50 PM