Soaking wet to save the world 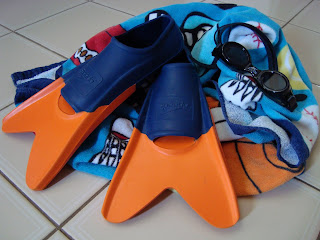 Noah belongs to a swim club that involves practices two evenings a week. On the nights that I take him to the pool, I wait patiently outside the boys' locker room after practice, unable, of course, to go in to move him along or to make sure that he's gathered all of his things. Most nights he eventually emerges, showered and smiling, from the locker room, with all of his gear successfully (though haphazardly) stuffed into his bag, and we head on our merry way home.

Last night, however, it seemed to me that Noah was taking an unusually long time to finish up in the locker room. When he finally burst through the door, he was struggling to drag his apparently very heavy bag along with him, and I noticed that the bag was oozing water from various locations.

"Um, Noah," I cautiously asked, "what's going on with your bag?" Knowing it was best to own up to things, he proceeded to explain to me that one of the other boys had turned on all of the showers for fun and had left the water running after leaving the shower area. Noah was very concerned about all of the water being wasted and wanted to turn the showers off, but he realized that some of the water sprays were too hot to get near them. Ever the quick thinker, Noah grabbed his towel to use as a "shield" against the deluge; wearing it over his head, he raced to extinguish each water source and successfully saved the day. (Oh my.)

Once Noah got dressed he realized something he hadn't thought of earlier: he now had a sopping wet towel to deal with. So he wrung it out, of course. All over the leg of his jeans and the front of his t-shirt. And then he stuffed the still-dripping towel into his bag to take home.

When the very damp Noah finished telling me this riveting tale, I was about to lecture him about the silliness of what he had done, but he stopped me after my first question of "Why on earth would you do that?".

"Mom," he said, very seriously, "did you know that 99% of the world's water is salt water, and of the 1% that is fresh water, 99% of that is locked up in the polar ice caps? We really need to be careful about what we do with our water. I couldn't just let it all keep running like that in the showers. I had to do something." How could I disagree with him? I suggested that maybe he could think of a less soggy way to save the planet next time; he sheepishly agreed and that was that. I couldn't (and didn't need to) say anything more.

The 9 year old part of Noah may do some foolish things sometimes; that's what I expect from a boy his age. What amazes me is the other part of him, the part that is able to think anything but childish thoughts, the part that is wise and shows a consideration that is beyond his years. Some day this boy is going to do something wonderful for the world. I have a feeling it won't involve any more soaking wet towels, either.
Posted by Lisa at 1:47 PM