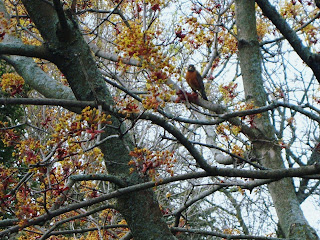 I am quite certain that I handle enough chaos and odd behaviour at our house in the mornings when I'm trying to get the boys off to school. Apparently, though, Mother Nature thinks otherwise; she sent me a deranged bird to deal with this morning as well.

At precisely 6:22 am, I was talking myself into getting up when I noticed a distinct tapping sound. I listened more carefully and heard it again... and then again: a "tap, tap, tap" followed by a pause, then another "tap, tap, tap" and so on. I thought maybe Will was up to something interesting in his room (believe me, that was entirely possible), but when Matt heard it too, he thought it sounded more like it was coming from outside. I assumed it was the chimney repair guy who had been working on the house two doors down yesterday; I marvelled at his "up and at'em" work philosophy, and went about getting ready for the day.

When Matt came upstairs after eating his breakfast, he told me that the sound was actually coming from a robin who was repeatedly pecking at our dining room window. I found this a little alarming and sad (why would a robin want to peck at the window?) but by the time I got downstairs, I was relieved to see that he was gone. Fast forward to breakfast with the boys when the three of us were jolted by the sound of a repeated "whomping" coming from the front of the house. We ran to the living room and there was the robin, throwing himself again and again at the front window this time, seemingly without any intention of stopping. There were other robins around, too, and they seemed to be either jeering at him, or cheering him on like frat boys after a night of partying, encouraging a wild friend in his ridiculous behaviour. (Seeing as how I don't speak robin, it was hard to tell what exactly they thought of the whole scene.)

You can imagine how distressing this was to a house full of animal lovers. Noah kept going to the window and moving the curtain to try and scare the robin off for his own good, while Will kept worrying that maybe the bird had some strange bird disease that made him want to crash himself into windows. I kept trying to talk sense into the little creature ("OH, bird, WHY do you keep doing that? Go off and find something more fun to do with your time! You're going to hurt yourself!"), as if that was helpful. Finally, when it was time to leave for school, we went out the front door and that seemed to chase him away. We were very relieved that we were able to distract the poor robin from his self-destructive behaviour.

After dropping the boys off at school, I went out in the backyard to do some spring gardening (in the rain, I might add). When I came back inside, guess who had returned? That relentless robin was at it again, throwing himself at the living room window with reckless abandon, over and over and over. He was taking the concept of "Angry Birds" to a whole new level!

By this point I was overwhelmed with curiosity about the situation, and so I googled "why do birds fly at windows?". I found this fascinating article, which completely explains the robin's behaviour. (Notice that it is only the male birds who exhibit this behaviour. I won't comment any further on that.) While I'm relieved to know now that our little robin friend probably won't hurt himself, I'm more than a little alarmed that this could go on for weeks. Maggie the cat finds it very entertaining, but it will pain the boys and I to see or hear much more of the poor bird's self-abuse.

As I'm writing this, the robin has just returned. He's yelling and flinging himself at the window yet again, trying to chase off his perceived foe. When I think he's gone from the front window, he shows up several minutes later at the back window and charges once more. Noah is currently working on designs for somehow insulating the windows or the bird or both, and for building a working model of a real-looking snake to drive the robin away. Whoever said the sounds of nature were soothing certainly never heard this racket. Oh dear. If this keeps up, it's going to be a very long spring....
Posted by Lisa at 1:30 PM