I know what you're thinking:  French toast without eggs, or milk, or gluten? Absolutely!  I learned this week that it's possible to create a delicious version of this breakfast treat without using any of those foods. (That discovery calls for a special celebratory breakfast, doesn't it?)

The four of us used to really enjoy French toast for breakfast some weekend mornings, but it's something I haven't thought about much since Will and I discovered our various food sensitivities.  Last weekend we were invited to my brother-in-law Nick's house for a lovely Easter brunch and it got me thinking about how challenging that particular meal can be to plan when gluten, dairy, and eggs are off the table.  I've had great success in coming up with alternative pancake recipes for us to enjoy over the past several years, so I made a mental note last weekend to finally do some experimenting with French toast recipes as well.

In my research, I came across multiple variations of two general recipes for vegan French toast:  one that uses a base of ground flax and/or some kind of flour with a non-dairy milk, and one that uses mashed banana. I thought it would be fun to merge both types together and see what would happen.

The French toast recipe I came up with is super quick to throw together and really tasty!  The banana adds a mild sweetness that is complemented by the cinnamon's spiciness, and the toast cooks up a lovely golden brown colour.  It's a great gluten-free and vegan option for a special occasion breakfast or brunch. 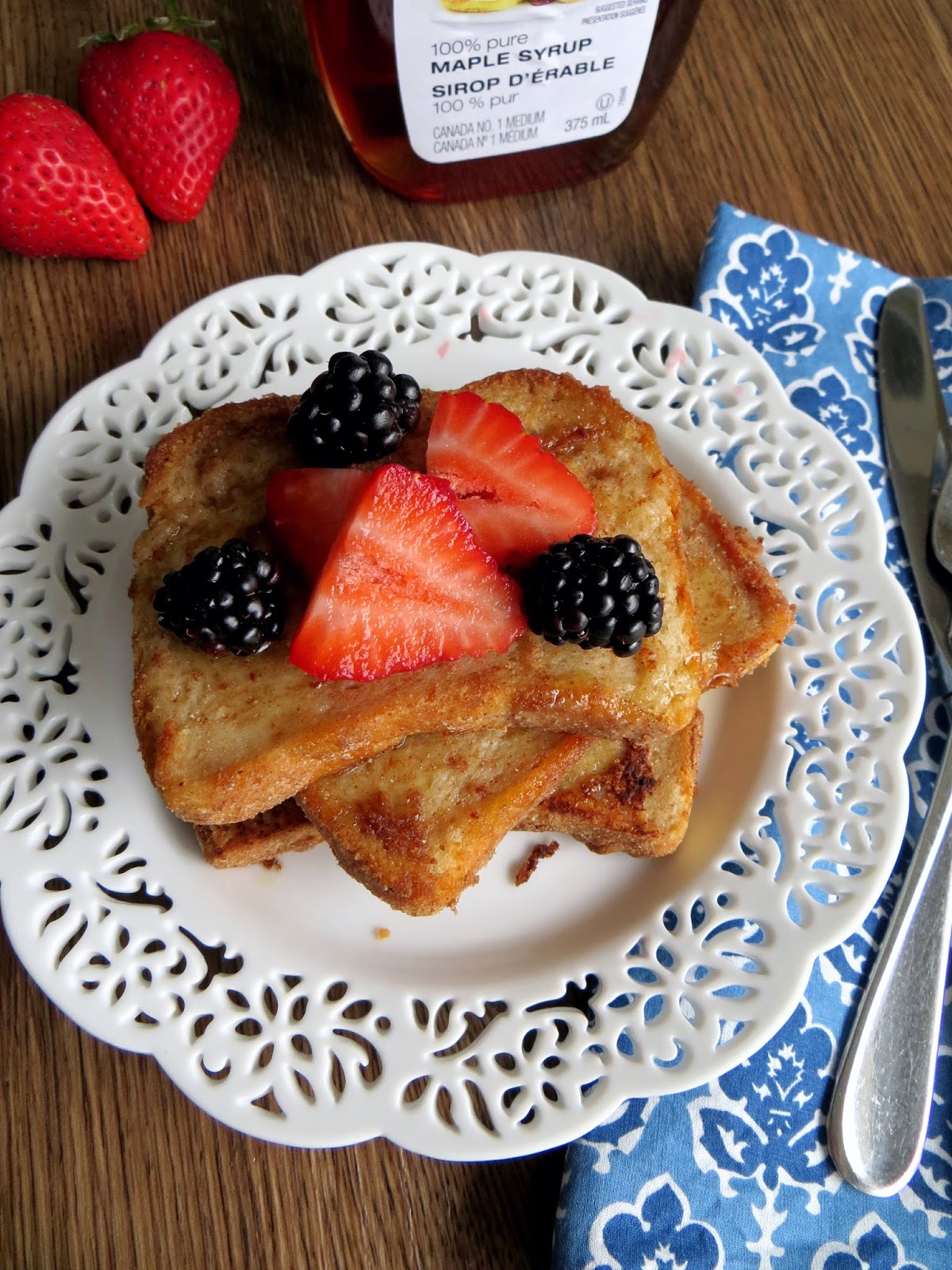 Place the banana, almond milk, coconut flour, chia seeds, cinnamon, and vanilla in the jar of a blender, and blend well, until a smooth batter forms.  Pour the batter into a shallow dish.

Place a frying pan on the stove over medium heat, and melt a bit of coconut oil in the pan.

When the oil is hot, dip the slices of bread into the batter one at a time to coat them.  (I used the side of the dish to gently scrape off any excess batter.)  Place each slice in the frying pan and cook, flipping the bread over to the other side once the bottoms are golden brown.  Finish cooking on the second side, and then serve the French toast warm, with maple sryup and/or fruit on top.

I had some issues with the French toast sticking to the pan when I cooked it, so I'm going to experiment a little further to see if I can perfect my method.  (I think maybe I needed to use more oil.) The fact that the toast didn't look quite as pretty as I would have liked did not take anything away from the taste of it, though -- it was still very yummy to eat!  I'm looking forward to treating Will to some of this French toast one weekend soon.

What gluten-free, dairy-free, and egg-free foods do you like to serve for a special breakfast?  I'd love to hear your ideas.  :)