It's "Sir William" Now (A Trip to Medieval Times)

This past school year, Will spent several weeks learning about the Medieval Period as part of the grade four social studies program.  It was a subject matter he must have found interesting, because I heard many details about knights and kingdoms from him after school during those weeks.  One day I got to watch a lively demonstration of a working catapult he had fashioned out of popsicle sticks, a plastic spoon, and masking tape, and at the end of the unit, Will went to school dressed in a silvery cape and helmet for a medieval feast his teachers had planned.  I was excited when Medieval Times in Toronto contacted me recently to invite me and my family to enjoy an afternoon of Middle Ages themed food and entertainment; it seemed a great opportunity to bring a little bit of what Will had learned to life for him.

We arrived at the Medieval Times "Castle" (at Exhibition Place) yesterday afternoon, and from the moment we stepped inside, we were made to feel that we had been transported to another time.  The helpful staff members were dressed in period costumes, and they addressed Matt and I as "My lord" and "My lady". The interior of the castle provided appropriate atmosphere with its dim lighting, its colourful crests and flags, its horse stables and its dungeon. Our family was assigned a colour of knight that we were to cheer for during the tournament; we were given red and yellow striped paper crowns to wear, and we had our photos taken with the falconer and his beautiful live royal bird.

The boys were given the option to participate in a free knight training session before the dinner and tournament, and while Noah declined, Will eagerly accepted this challenge.  He lined up behind a wooden sword in the sand in the centre of the arena with a group of other young trainees and was then taught how to perform various sword manoeuvres by the knights who would later participate in the tournament.  It was fun to watch Will practise his swordsmanship with a very intent look on his face, and to see the grin he flashed up at us on the sidelines when he was "knighted" by King Carlos in a group ceremony afterwards. 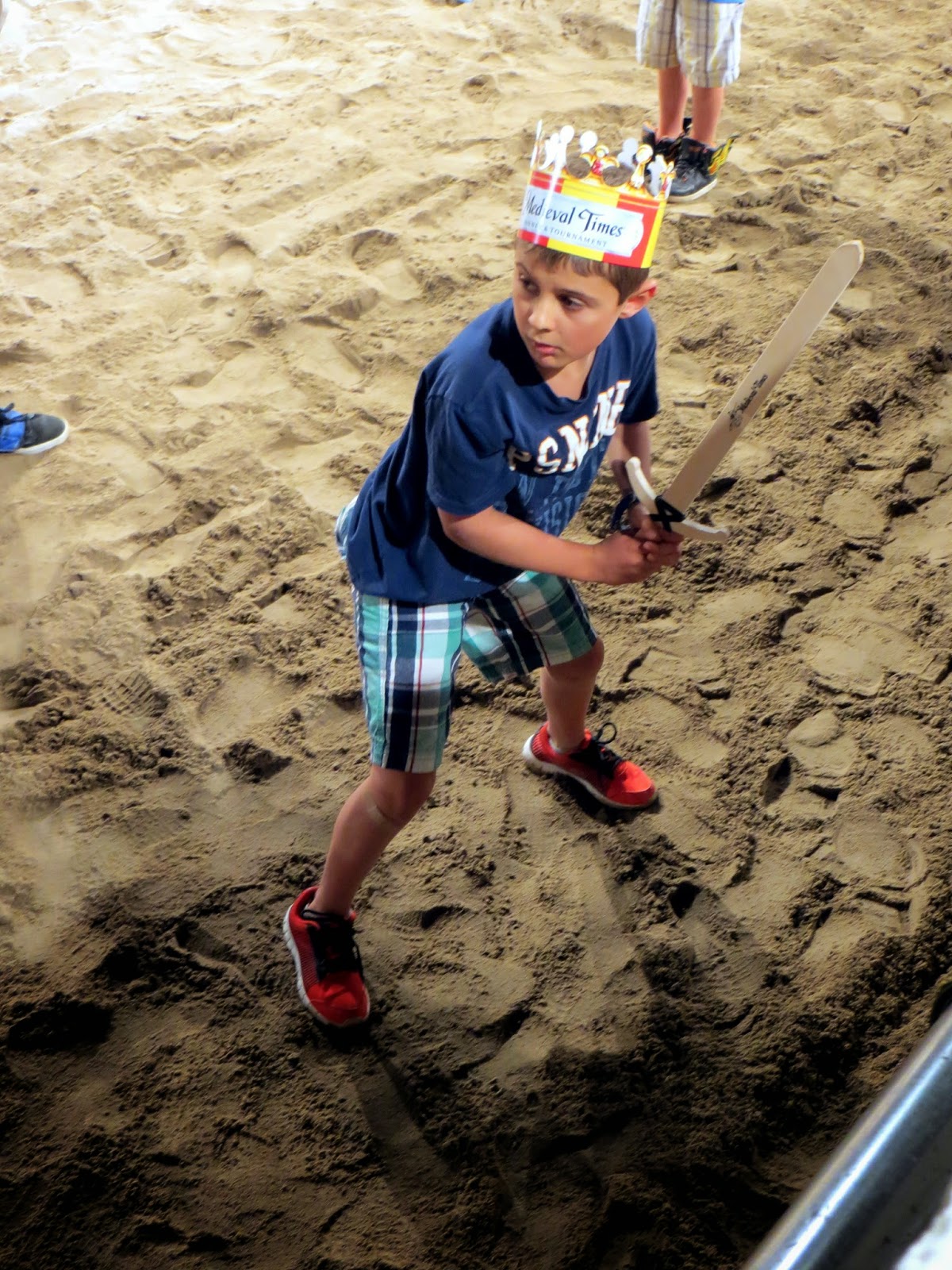 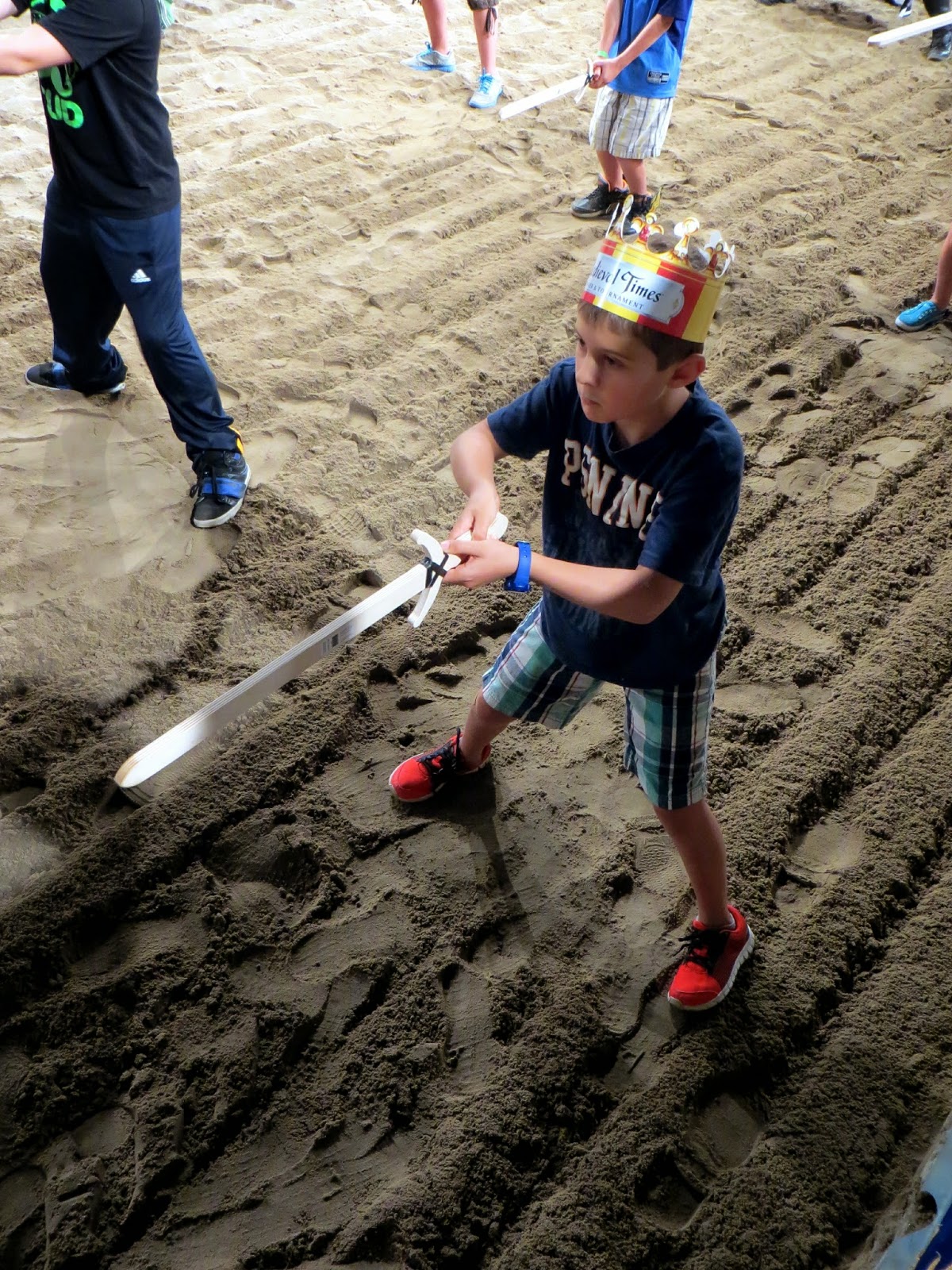 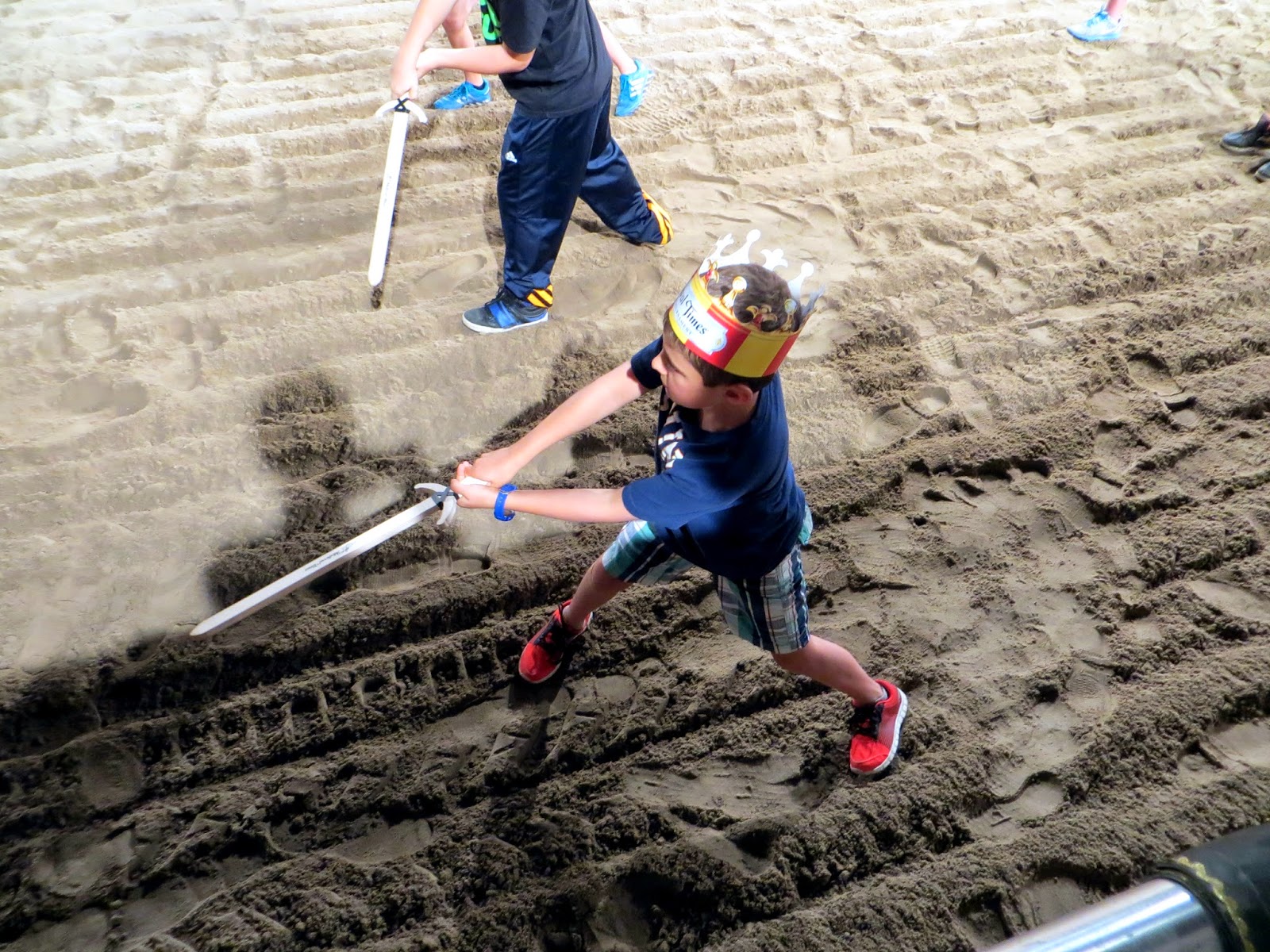 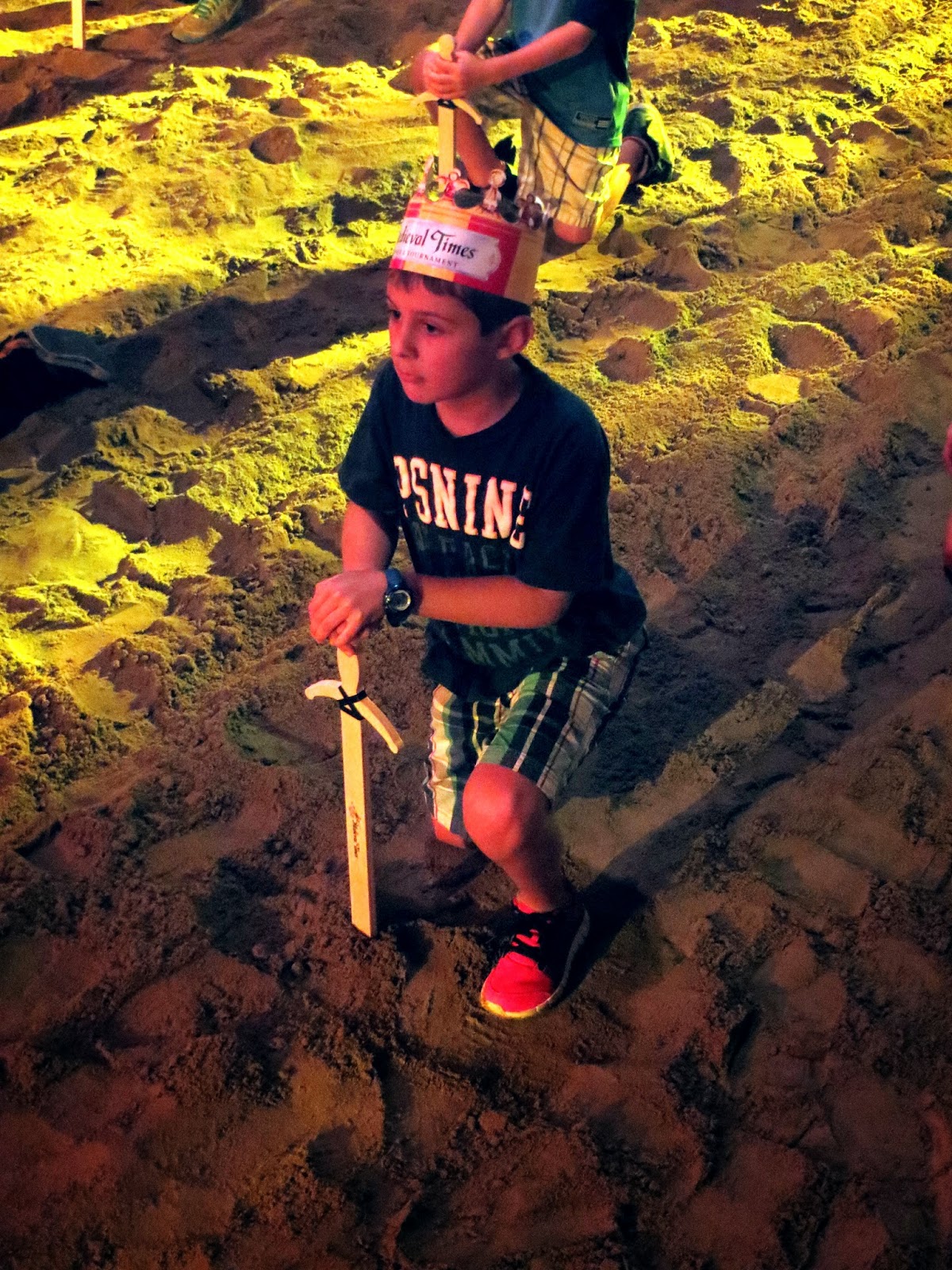 When it came time for the show, we were directed to our seats at a long table with a great view of the action to come.  Our "wench" welcomed us and provided us with excellent service throughout the afternoon as we enjoyed a tasty royal feast of tomato bisque soup, garlic bread, roasted chicken, spare rib, roasted potato, and dessert.  The food was all served on heavy iron dishes and we ate everything with our hands, as they did in the Medieval Period.  (Will thought this was fantastic, as we couldn't tell him to use his utensils the way we often remind him to do at home!)  We were very pleased to see how knowledgeable the staff members were about food sensitivities; they were very easily able to accommodate all of our family's special dietary needs. While we ate, we were entertained continuously by the high-energy performance of the skilled knights and brave, gorgeous horses as they completed various challenges.  The knight battles near the end of the tournament, which involved swords, shields, battle axes, and spiked metal balls, were so exciting that a wide-eyed Will could barely stay in his seat as he repeatedly yelled out words of encouragement to his favourite knights.  I appreciated that the battles were done tastefully -- there was a lot of contact between the knights, but there was no blood or gore. 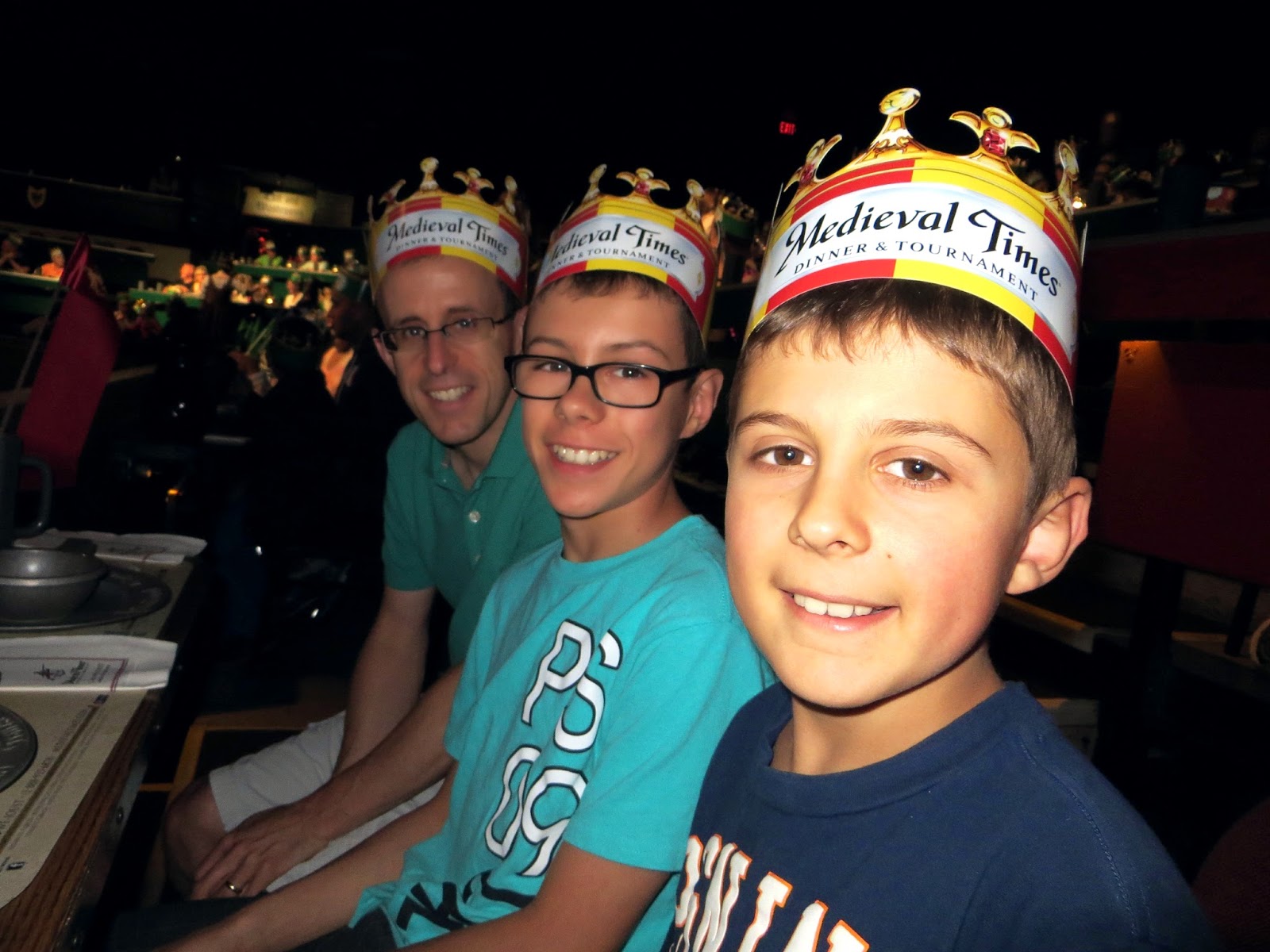 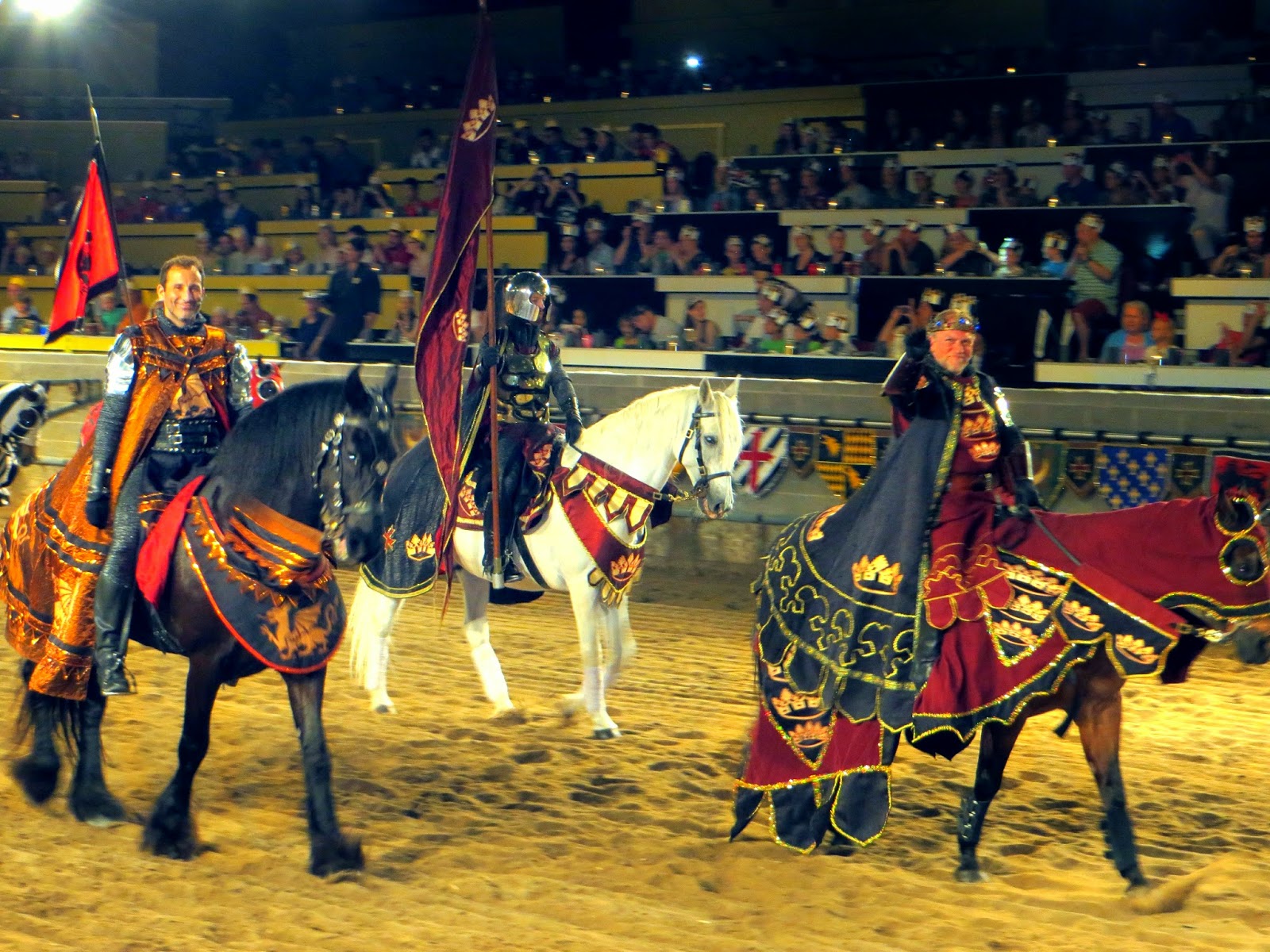 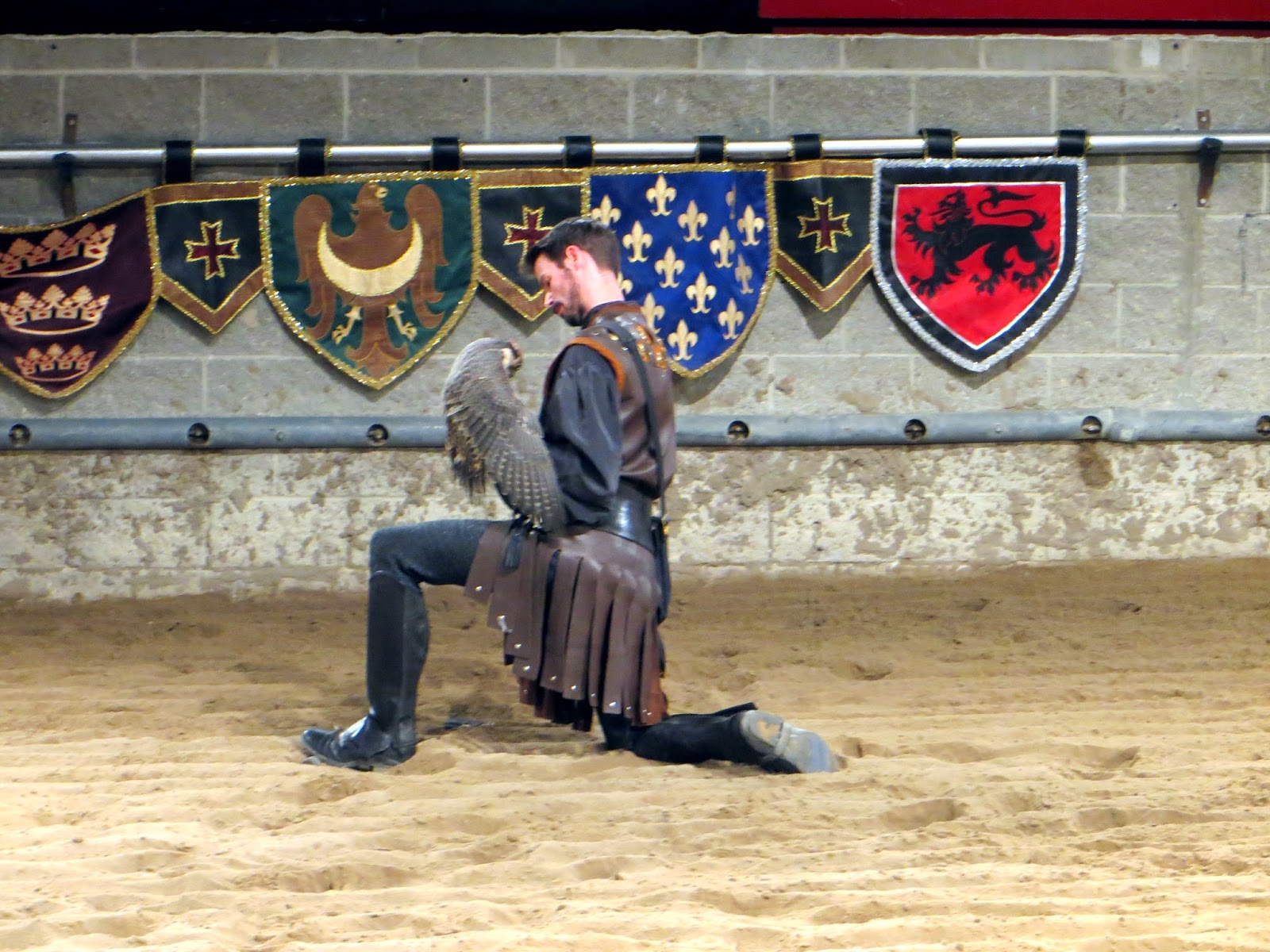 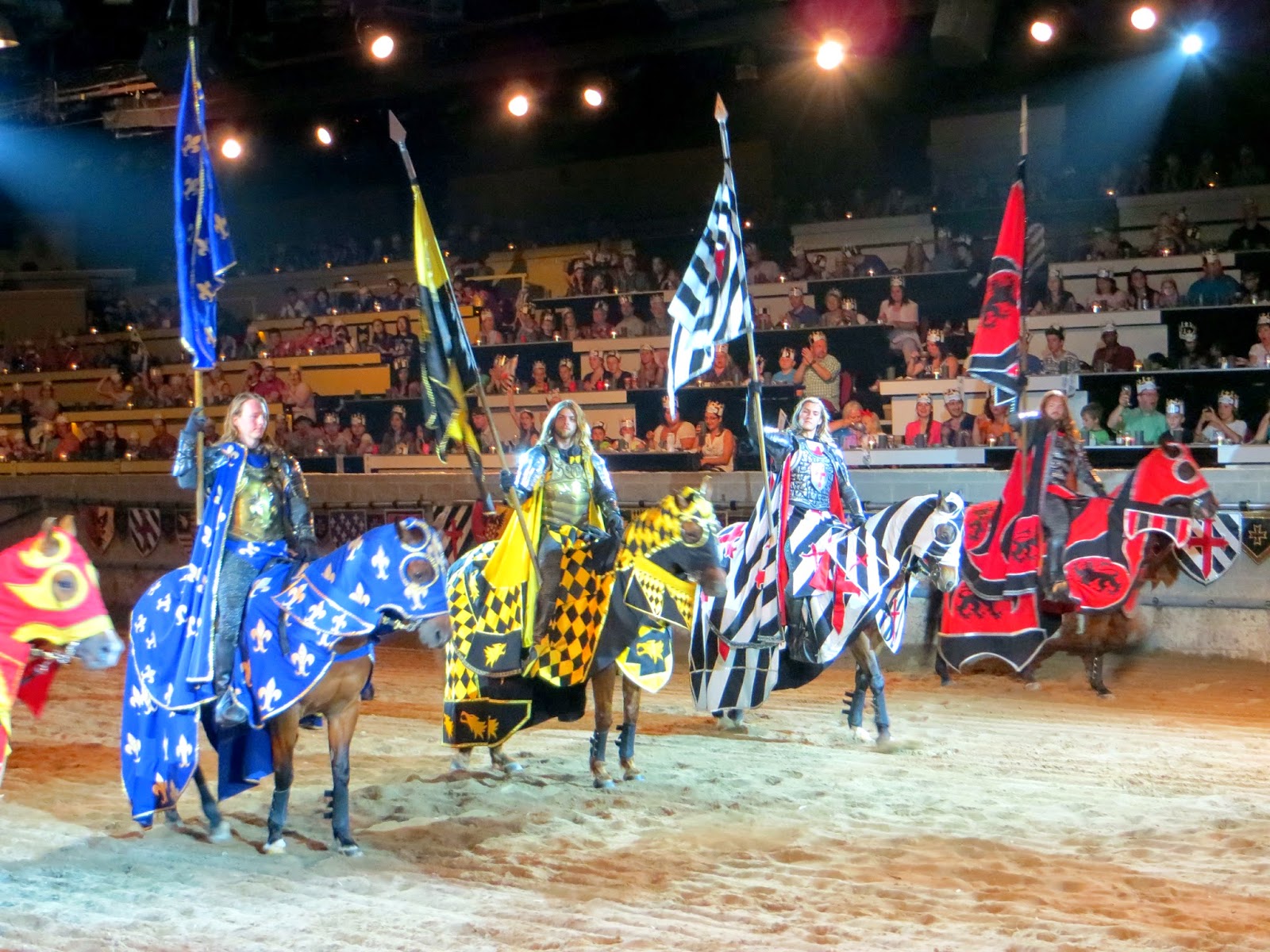 Our whole family had a wonderful experience at Medieval Times.  We loved how interactive the entire performance was -- spectators were encouraged to cheer and boo and wave coloured flags and truly become a part of the show, which increased everyone's enjoyment of it.  Matt, Noah, Will and I all thought it was a very fun way to catch a glimpse of another time in history.

There is only one drawback to our family having had this Medieval Times experience:  Will is now insisting we call him "Sir William".


Disclosure:  Medieval Times provided me and my family with our dinner and tournament experience, as well as some souvenirs to take home with us. (Thanks for the great afternoon, Medieval Times!) The opinions expressed here are my own.