Will recently became the proud owner of a fitness tracker. The idea of keeping close tabs on specifics like the number of steps he takes in a day and the number of hours he sleeps at night, with a little wearable device that also serves as a watch, really appeals to the mathematical part of his brain, and he'd been studying the different models of trackers every week in the store flyers, comparing their various features, for months. Finally, just before track-and-field and cross-country season, he arrived at a decision and gleefully made his purchase at the mall with money he had saved from his birthday and his allowance. He has not taken the thing off since (except to put on sunscreen).

How many steps would you think an eleven year old boy would rack up in a fourteen hour day of activity? Ten thousand? Fifteen, maybe, if he was a particularly busy child? I will tell you, quite seriously, that Will has more than once surpassed 24 000 steps in a day.  This does not include any time that he has spent biking, or scootering, or swimming, because the tracker doesn't keep track of those activities.  And this time of year, he spends a lot of time doing all three of those things, too.  I'm still trying to figure out how he manages that level of exertion on the nine and a half hours of sleep the fitness tracker says he gets at night, or on the seemingly small amount of food he consumes in a day. The numbers just don't add up. 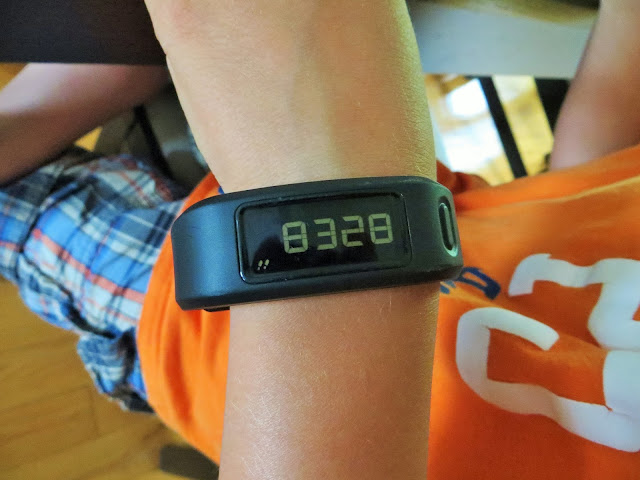