Noah graduated from Grade 8 on Monday afternoon.  He looked so handsome and grown up all dressed in his suit and vest and tie, and I was a beaming, proud mom as I watched him accept his diploma from his teachers, thinking of all that he has accomplished over the course of his elementary school years, and of what an extraordinary young man he has become. I was not as emotional as I thought I might feel over this significant milestone in my son's life, though; it felt exciting rather than sad to see him take this last step before moving on to high school full time next September.  I think I went through all of the natural feelings of wistfulness and worry last summer as Noah prepared to take two Grade 9 courses a year early. Now, after seeing how happy that positive experience has made him, I feel mostly eager for his opportunity to have more room to grow next year.  I think he feels the same way. 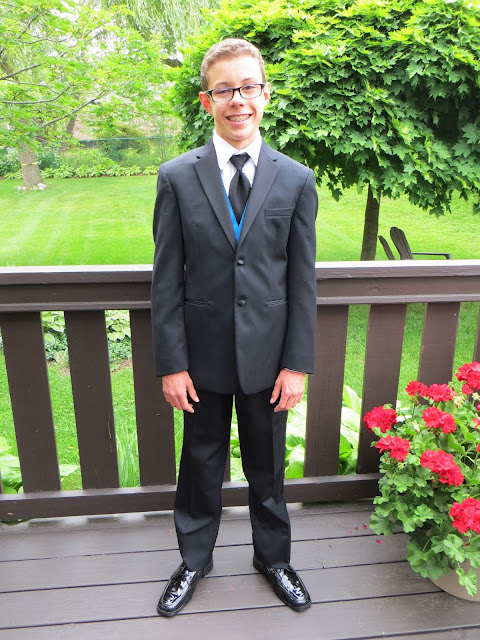 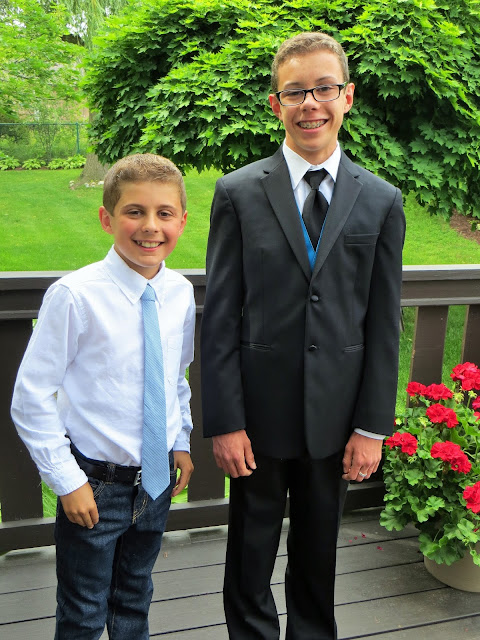 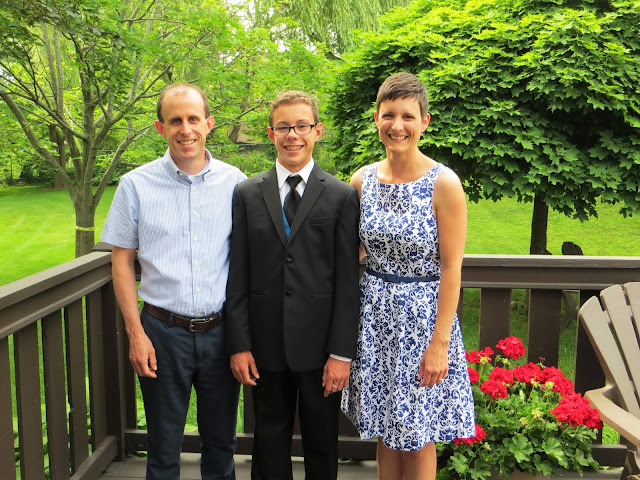 There are many changes happening in Noah's life right now. Last weekend he swam his last meet as an age group swimmer with Club Warriors. He has decided to leave competitive swimming next year, a sport he has worked very hard at and enjoyed for a long time, so that he can pursue his varied other interests in high school. He also finished his last TriGator triathlon last weekend (an event that he has loved over the years) now that he's reached the final year of eligibility age-wise. But these goodbyes are not melancholy ones, either, because there are exciting new opportunities already lined up to take their place. Noah plans to join the cross-country and track teams in high school next year, and he'll continue to swim, though with his school team instead. He wants to join the school triathlon club, and is also enthusiastic about being part of the robotics team, a challenge that is well-matched to the way his mind likes to work. At the TriGator this year, Noah volunteered in the pool area before he competed in his own race later in the day, marshalling swimmers and helping little ones in the water, and next year he looks forward to being able to volunteer for the entire event. He has also just landed himself his very first job: come September, he will be an intro level coach to swimmers at Club Warriors, which will allow him to still be involved in an organization that has meant so much to him.

In the midst of all of these potentially sad transitions, I am filled with happiness for Noah. I know that he will take on these new opportunities and challenges with the same courage I've seen him show so many times at the pool over the last several years: he'll dive right in, with strength, grace, and determination to reach further and become better.

Congratulations, Noah, on everything you've achieved through your talents, hard work, and positive attitude, and best wishes for everything that is to come! We are all so incredibly proud of you.  xoxo
Posted by Lisa at 12:27 PM