On Christmas Eve afternoon, I called my grandma in Sault Ste. Marie to tell her I was thinking about her and to wish her a Merry Christmas. I was feeling as I often do when special occasions approach, and I am here and so many of my extended family members are there: flooded with warm memories of the happy family gatherings of my childhood, and wishing a little wistfully that it was somehow easy to recreate them in the same way now.

My grandma and I chatted cheerfully about the preparations we'd each been making for the holidays. She told me about the dozens of genettis and pintas she had baked and given away, the cheese and meat ravioli she'd prepared for family dinners, and the most recent batch of biscotti to come out of her oven that week, which were orange flavoured and dotted with chopped almonds and dried cherries. (Have I mentioned before that my grandma is eighty-six years old? Eighty-six, and still finding joy in baking and cooking up wonderful foods to share with the people she loves. "What else am I going to do?", she asks me. "You've gotta keep busy." I hope I have half of the strength and enthusiasm she does when I'm her age.)

I told her I liked the sounds of her biscotti, and she asked me if I thought I could make them in such a way that I'd be able to eat them. I told her I was pretty sure I could. And then one day in early January, an envelope addressed to me in my grandma's handwriting showed up unexpectedly in my mailbox. 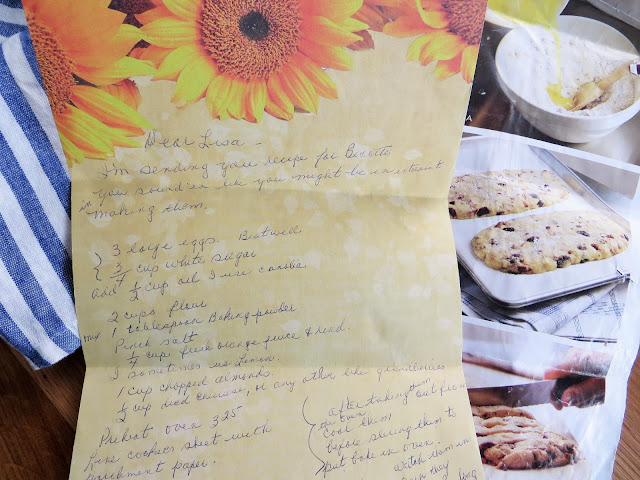 My grandma had thoughtfully written out her biscotti recipe for me, and included a series of photos from a magazine to illustrate the method for making them. I was especially eager then to try making a batch of my own. Having my grandma's encouraging handwritten instructions made me feel almost as though she were here with me in my kitchen.

I had to modify my grandma's recipe quite a bit to eliminate gluten, eggs, and refined sugar, but the almond flour version I came up with has the same delicious flavours hers did. The sweet orange flavour and tart cherries scattered through a crispy cookie were a big hit with my eager dessert eaters here at home. 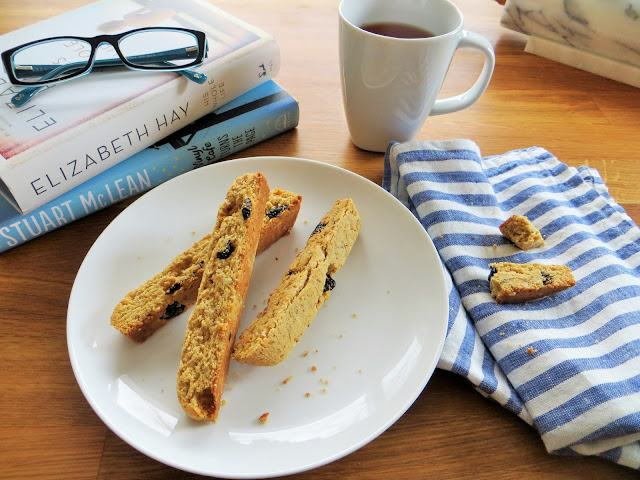 Add the melted coconut oil and the orange juice to the almond flour mixture. Stir well, until a crumbly dough forms. Knead the dough with your hands until it all sticks together.

On a parchment paper lined baking sheet, form the dough into a long, flat oval with your hands. (See the example my grandma sent me in the first photograph above. I think my oval was a little too wide this first try; next time I'll try making it longer and a little taller to improve the shape of the finished biscotti.) Bake in the preheated oven for 30 minutes, then allow the baked dough to cool completely.

With a sharp knife, slice across the width of the cooled oval to create biscotti that are each about an inch wide. Place the biscotti cut side up on the baking sheet once more, and bake them for another 10 to 15 minutes at 325 F, keeping an eye on them so they don't brown too much. Allow the biscotti to cool again until they are crispy.

I was really pleased to be able to create a version of my grandma's biscotti that all of us can enjoy. They're a delicious accompaniment to a hot cup of coffee or tea and a good book on a winter afternoon. I've saved my grandma's letter along with my own recipe notes in my cookbook now -- I'll think very fondly of her every time I make this special treat.